Skip to main content
Friday File: Where Do the GOP Candidates Stand on China’s Rise?

Above the Fold. China’s rise presents perhaps the most significant challenge to American foreign policy over the next decade. Here’s one concern: China’s growing force of long-range precision missiles could eventually push the U.S. Navy out of the Western Pacific, thereby endangering an alliance system that Washington has led for more than six decades. You wouldn’t know that, however, from following the GOP presidential race. The candidates don’t talk much about how to respond to China’s increased military might. Yes, Mitt Romney has called China an “economic threat" and proposes sanctioning it for  “unfair trade practices.” All the foreign policy section of his website says about China, however, is that “China is emerging.” Jon Huntsman often starts his campaign events by speaking Mandarin, presumably to remind his audience that as a former U.S. ambassador to China he has foreign policy experience. But he has gone no further than Romney in setting forth a strategy for dealing with Beijing. (Huntsman has said that he would sign legislation to punish China for currency manipulation while in the next breath saying that China would “rebut” the penalties with “commensurate tariffs” that could trigger a trade war we don’t want.) The rest of the field has been similarly quiet. This collective silence prompts a suggestion to the Washington Post and Bloomberg, the co-sponsors of the next GOP debate on October 11 at Dartmouth College in New Hampshire. Please don’t use the fifteen minutes you allot to foreign policy in the debate to flit from topic to topic. Instead, devote the entire segment to asking the candidates how they propose to respond to China’s military rise. We might learn something, and you might break some news.

CFR Event of the Week. Indonesia is one of the most interesting countries in the world. It is an archipelago made up of more than 17,500 islands. It is home to more than 245 million people who speak more than seven hundred languages. It sits astride one of the busiest sea lanes in the world. And its cuisine is scrumptious. So I was pleased that the Indonesian minister of foreign affairs, Dr. Marty Natalegawa, stopped by CFR this week. He and James Zirin of Digital Age discussed a range of issues, including how Indonesia tries to “row between two reefs” in its relations with China and the United States. You can read the transcript of Dr. Natalegawa’s remarks, download the audio, or watch the video below.

A Conversation with Marty Natalegawa

A Conversation with Marty Natalegawa

Read of the Week. The U.S. economy has benefited enormously from the fact that the dollar is the world’s premier reserve currency. Other countries want to hold the dollar in their reserves, and commodities like oil and gold are priced in dollars. But as the economist Avinash Persaud has written, “reserve currencies come and go. They don’t last forever. International currencies in the past have included the Chinese Liang and Greek drachma, coined in the fifth century B.C., the silver punch-marked coins of fourth century India, the Roman denari, the Byzantine solidus and Islamic dinar of the middle-ages, the Venetian ducato of the Renaissance, the seventeenth century Dutch guilder and of course, more recently, sterling and the dollar.” Which raises a question about the future. Will China’s yuan (or renminbi) soon emerge as a reserve currency? As the Economist notes in a must-read special report, China would dearly love for the yuan to become one. It remains a ways, however, from reaching that status. When it does, the consequences for the United States will be immense.

Blog Post of the Week. My colleague, Ed Husain, has a new blog, "The Arab Street." He is off to a strong start with posts on Iran, Pakistan, Egypt, and Saudi Arabia. Ed is especially sharp on the debates among clerics, politicians, and activists in Muslim-majority countries over Islam’s role in society. As well he should be. Previously a member of and strategist for radical Islamist organizations in London, he broke with them, wrote the best-seller The Islamist: Why I Became an Islamic Fundamentalist, What I Saw Inside, and Why I Left; and co-founded Quilliam, the British counter-extremism think tank.

Poll Question of the Week. Texas Governor Rick Perry may want to rethink his debate strategy. A Fox News poll out this week shows that his support among likely Republican primary campaign voters dropped ten points in September, from 29 percent to 19 percent. At the beginning of the month he held a seven point lead over his nearest competitor, Mitt Romney. By the end of the month, he was trailing Romney by four points. Romney, however, wasn’t the beneficiary of Perry’s stumble; his support remained essentially flat (23 percent versus 22 percent). Herman Cain, however, nearly tripled his support (from 6 percent to 17 percent), and Newt Gingrich nearly quadrupled his (from 3 percent to 11 percent). With the caveat that correlation does not establish causation, Perry’s widely panned debate performances probably drove his ratings decline. Does this mean that Perry’s candidacy has been fatally weakened? No, what debates take away they can also give back. So the October 11 debate in New Hampshire will be interesting to watch. But in the meantime, the drop in Perry’s numbers explains the clamoring for New Jersey Governor Chris Christie to enter the race.

Chart of the Week. Nearly 700,000 foreign students studied at colleges and universities in the United States in 2009/2010, the last year for which data are publicly available. That was 34 percent higher than a decade earlier. So higher education is a growth industry for the United States even with the more onerous visa processes imposed after 9/11. Which countries send the most students? Not surprisingly, China and India, the two most populous countries in the world, lead the way. But you might be surprised that South Korea, Saudi Arabia, Vietnam, and Turkey make the top ten, and that more Nepalese students than Russian ones come to the United States to study. 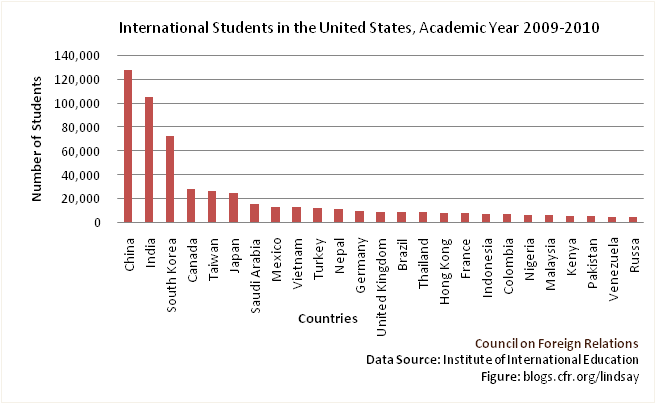 Too Good Not to Note. Elliott Abrams writes that Mahmoud Abbas’s U.N. speech made waves and drew cheers but will ultimately hurt the Palestinian cause. Liz Economy notes that an awful lot of American students are interested in China. Stewart Patrick finds pearls of wisdom in a recent speech by World Bank president Bob Zoellick. Adam Segal concludes after reading the Chinese press that leading Chinese thinkers see cyberspace as an emerging, critical area of competition with the United States. Steve Sestanovich has some nice things to say about Dmitri Medvedev, but not about his successor, Vladimir Putin. Micah Zenko offers a farewell salute to retiring chairman of the Joint Chiefs of Staff, Admiral Mike Mullen. Spencer Ackerman gives a first look at the questions raised by the killing of Anwar al-Awlaki. The New York Times has a front-page story, oddly enough with no byline, on why many Christians in Syria aren’t enthusiastic about the possible ouster of Bashar al-Assad. Walter Russell Mead calls for a fundamental “rethink” of American higher education. Alec MacGillis profiles Rick Perry. Brad Delong writes that historically low borrowing rates offer the U.S. government the rare opportunity to enjoy a free lunch. Josh Lederman argues that Mitt Romney has decided to run to Rick Perry’s right on foreign policy.

Perils of Prediction. Your 2011 World Series Champions, the Boston Red Sox. Thirty-three of forty-five ESPN baseball experts picked the Red Sox to win it all in 2011. Uh, no. Not only did the Red Sox fail to win their third World Series championship in eight years, they missed the playoffs entirely. They did so in historic fashion. They are the first team in major league baseball history to blow a nine-game lead in the month of September. They lost twenty of their final twenty-seven games. How big of an epic fail was that? Nate Silver reports that on September 3 the Red Sox had a 99.6 percent chance of making the playoffs. With two outs and nobody on in the bottom of the ninth inning against Baltimore on Wednesday night, they had a 95.3 percent chance of forcing a one-game playoff against the Tampa Rays. In all, Silver estimates that there was one chance in 278 million that the season would turn out the way it did. Perhaps. But when it comes to predictions it doesn’t matter how unlikely it was that you were wrong. It only matters that you were wrong. So the Red Sox are getting a very early start on their winter vacation.

Quote to Ponder. "During the 1975 negotiations ending the Vietnam War, a member of the U.S. delegation, Col. Harry Summers, told his North Vietnamese counterpart, Col. Nguyen Don Tu, ’You know, you never beat us on the battlefield.’ Tu replied, ’That may be so, but it is also irrelevant.’" Fred Kaplan, “Friend, Foe, or Pakistan,” September 23, 2011.

A Reason to Smile. Chrysanthemums.

The World Next Week: Will the Security Council Intervene in Syria?