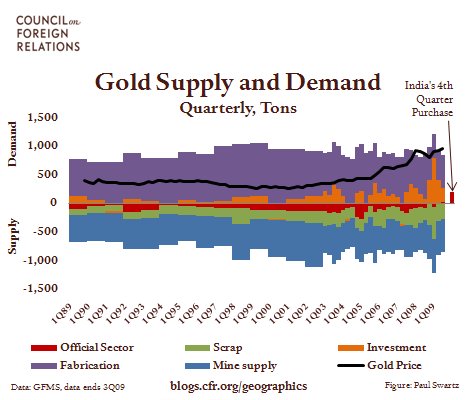 Central banks have been consistent suppliers to the gold market, at least up until the second quarter of 2009, when they became a source of demand. India bought a substantial 200 tons, illustrated by the red bar on the far right of the above figure, from the IMF in November. Russia, Sri Lanka, and Mauritius have also been buyers of late. Yet even if the rebuilding of central bank gold stocks turns out to be a long-term trend, in the short run the gold market is much more likely to be driven by volatile private investment demand, which jumped from only 8% of demand in the third quarter of 2008 to 86% in the first quarter of 2009 (see the orange block on the right of the figure). Investment demand is in part facilitated by exchange traded funds (ETFs) such as the SPDR Gold Shares, which has bought a massive 353 tons of gold since the beginning of 2009.

Blas: Gold-On the Flip Side