Skip to main content
The Health of Americans: It's Worse Than You Think

As part of CFR’s Renewing America initiative, we spend a lot of time looking at how well the United States is doing against other countries in areas such as education, investment, research and development, and the other foundations of a strong economy. Usually the answers we find are mixed – the United States is pretty strong on innovation and higher education, pretty weak on infrastructure and primary education, etc. Most of the answers are not terribly surprising. But a new report out yesterday from the National Research Council and the Institute of Medicine stunned me: on the one measure that counts the most – longer and healthier lives for Americans – the United States is failing abysmally. Americans are living shorter, unhealthier lives than citizens of any other advanced country in the world.

The report, entitled “U.S. Health in International Perspective: Shorter Lives, Poorer Health,” is a catalogue of horrors. Here are just a few highlights:

And the United States has been getting steadily worse over time. The chart below from the report is slightly confusing, but it captures this deterioration. What it measures is the likelihood that a girl who reaches age fifteen will live to age fifty. From 1958 to the early 1970s, the odds of an American girl dying before age fifty was about the same as that of a Japanese girl or a British girl. Since then, the United States has fallen further and further behind. Today, the odds of the American 15-year-old girl dying before age fifty is about 4 percent, compared with a 2 percent average likelihood in the other sixteen countries. What the numbers in the chart suggest is that the United States is about forty years behind where it ought to be in improving the health of its young women. 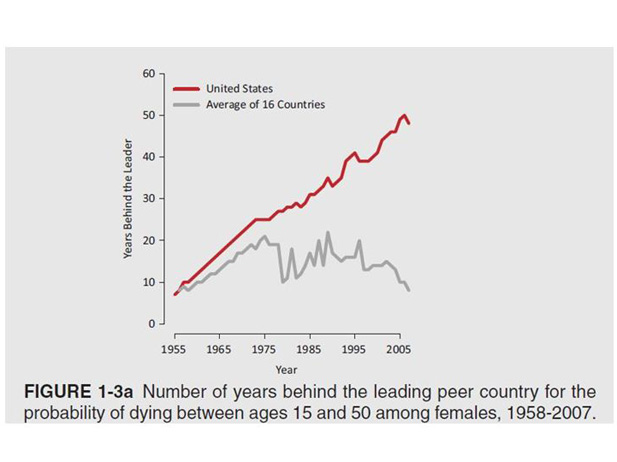 It is hard to find encouraging trends. To quote the report’s summary:

The panel was struck by the gravity of its findings. For many years, Americans

countries. This disadvantage has been getting worse for three decades,

especially among women. Not only are their lives shorter, but Americans also

pervasive over the life course—at birth, during childhood and adolescence.

There are a few positives if you look hard enough. Americans drink and smoke less than those in most other advanced countries. Fewer of us die from cancer. And those who manage to make it to age seventy-five actually live longer than their peers in other countries.

There is no single reason why Americans are so unhealthy. The report cites multiple causes that range from more reckless individual behavior to social ills. On the individual side, Americans consume more calories, have higher rates of drug abuse, are less likely to wear seat belts and more likely to drive drunk, and are more likely to use guns against each other. The societal causes include inaccessible or unaffordable health care, cities and suburbs that discourage people from walking, higher levels of poverty (especially child poverty) and income inequality, a lack of social mobility, and a weaker social safety net. The report notes, however, that even the most privileged Americans – white, upper income, college-educated, with health insurance – are in poorer health than their peers in other wealthy countries.

The report has many recommendations, but its primary goal is to raise awareness about just how bad the health of Americans has become. It notes: “Americans may know about some deficiencies in the U.S. health care system, but most might be surprised to learn that they and their children are, on average, in worse health than people in other high-income countries.” I was one of those.

American Industry Is on the Move

Much Ado About the Cyber Skills Shortage