Back in July 2010, we produced a post examining the “Icelandic Post-Crisis Miracle,” as proclaimed by Paul Krugman.  We showed that Krugman’s “miracle” was merely an artifact of comparing changes in Iceland’s real GDP with that of Estonia, Ireland, and Latvia since the strategically chosen 4th quarter of 2007.

Why did Krugman choose the 4th quarter of 2007?  Because starting with any other quarter would have ruined his story.  Based on the GDP data available at the time he made his figure (which have since been revised), Iceland’s GDP had fallen a whopping 5 percentage points between Q3 and Q4.  By starting his story in Q4 Krugman managed to lop that off, making Iceland look much better.

We showed that the miracle story collapses as the starting date for the comparison is backed up.  What we find is a simple story of large booms and busts in Estonia and Latvia, and much smaller booms and busts in Iceland and Ireland.  Krugman’s post and our deconstruction are here and here.

Recently, Krugman has produced a slew of new posts reviving his claims in different forms.  Geo-Graphics readers have, not surprisingly, asked us to revisit the question of Iceland’s economic performance.

Krugman produced this figure in a post on June 14, showing that as of the 1st quarter of 2012 Iceland had a better real GDP growth performance relative to its GDP peak than the three Baltic states (Latvia, Estonia, and Lithuania) and Ireland had relative to their various GDP peaks.  “Looking at this,” Krugman asks rhetorically, “would you have expected that Latvia would be lionized as the hero of the crisis?” 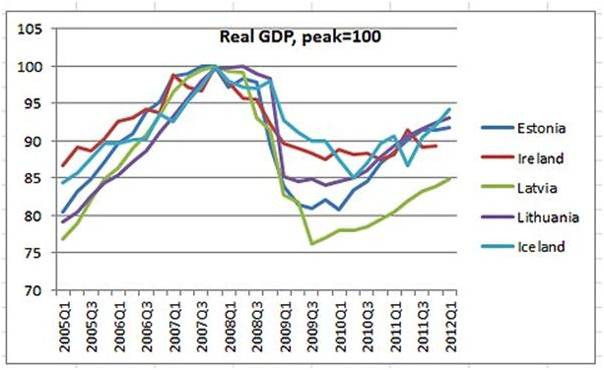 The answer is, of course, “no.” But Latvia only looks so bad because Krugman chooses to tell his story about post-crisis performance only in terms of how each country has performed since its peak. This makes little sense in the context of the IMF's 2009 staff report which concludes that Latvian "output exceeded potential by 9 percent" in 2007. (Updated 7/3/2012 2:04 p.m.)

What if we decided to tell the story only in terms of how they have performed since their troughs – that is, how well they have recovered since they hit bottom? Here it is: 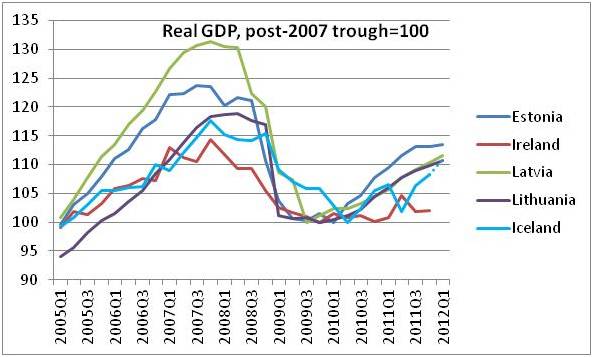 We don’t yet have the Eurostat GDP data for Iceland in the first quarter of 2012, so we’ve plugged in data from the Icelandic government (as Krugman must have done). As can be seen, Iceland’s performance has only been on par with the bottom of the Baltic pack, Lithuania. Latvia’s performance has been better, and Estonia’s markedly better.

Once again, Krugman has relied on a Potemkin-Village graphic to illustrate his wider claim, which is that Icelanders derive unambiguous net benefits from their government obliging them to hold and transact in a national currency that their trading partners will not accept. (80% of Greeks consistently reject going back to such a state.)

Below we update the figure in our July 2010 Geo-Graphic, comparing Iceland’s economic performance with that of Estonia, Ireland, Latvia, and Lithuania going back to 2000. 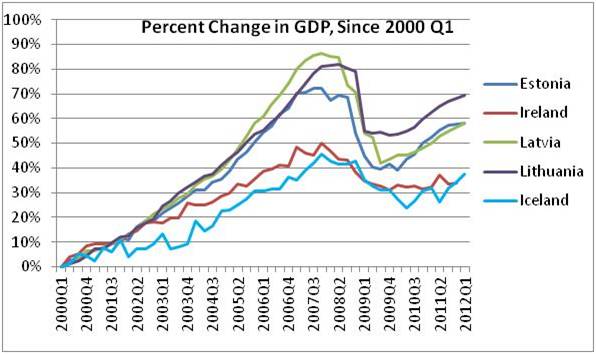 Iceland comes in tied for last with Ireland (for which 2012 Q1 data are not yet available) – well behind Lithuania, Estonia, and Latvia. Since 2009, those three have been growing strongly, while Iceland and Ireland have largely stagnated.

Sorry, Virginia, there is no Icelandic miracle.

Reuters: Baltic Countries' Austerity Lesson for Europe—Just Do It

Gloomy Jobs Picture Is off the Fed’s Charts