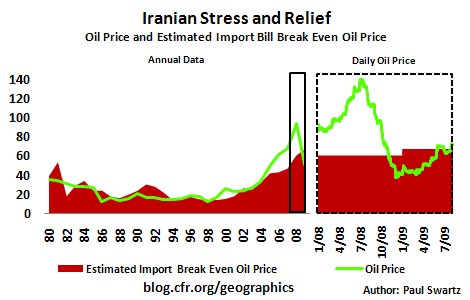 This chart plots oil prices against Iran’s estimated import bill “break-even” oil price — the price below which Iran either had, or would have had, to find sources of hard currency other than oil exports, which constitute about 85% of its total exports, to finance its imports in a given period. From 1998 to mid-2008, rising oil revenues enabled Iran’s government to enact programs and subsidies aimed at consolidating popular support and preventing social unrest. But the steep decline in oil prices in the second half of 2008 significantly curtailed the regime’s ability to finance these programs. As the chart shows, oil prices dropped below Iran’s break-even point in late 2008, at which time President Ahmadinejad proposed that government energy subsidies be canceled, a move that met resistance in Iran’s parliament. However, oil prices have been rising in recent months, reducing the pressure on Iran’s government to make further unpopular subsidy cuts. Rising oil prices may be critical to President Ahmadinejad as he struggles to reconstruct a foundation of popular support.

Windrem: Are Saudis Waging an oil-price war on Iran?