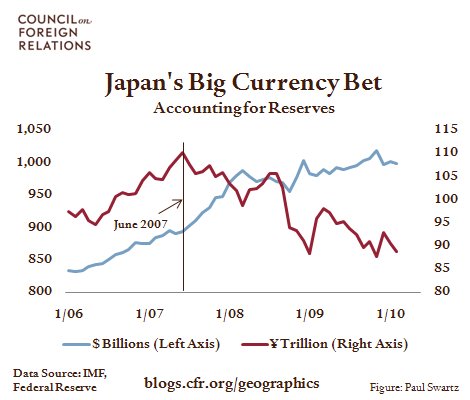 Because foreign currency reserves are viewed as a form of insurance, the risks of excess reserves are often overlooked. Japan holds reserves equal to 20% of GDP, more than it could possibly need for insurance purposes. These holdings make up a foreign asset portfolio that is subject to exchange rate risk. However, this risk is hidden because Japan’s reserves are primarily held in U.S. dollars and their value is reported in U.S. dollars. So as the local and global purchasing power of the dollar falls there is no change in the reported value of the reserves. As shown in the chart, Japan’s reserves increased by over $100 billion since June 2007, but fell by nearly ¥20 trillion when measured in local currency terms – over 4% of GDP. The risk of large losses in national wealth is even greater for China, whose reserves make up 50% of GDP. This risk will become apparent as and when China allows the renminbi to appreciate, in line with market pressures.

Reuters: No Plan To Tap FX Reserves For Spending

America as the World’s Risk Taker