When financial historians get around to writing the history of the great crisis of 2008 (or great crisis of 2007-09?), they will no doubt focus on the collapse of the market for securitized mortgages -- and in reality, almost all forms of credit risk. The corollary of that fall, though, has been the rise in the price -- and fall in yields -- of comparatively safe financial assets. And US Treasuries are still considered safe. 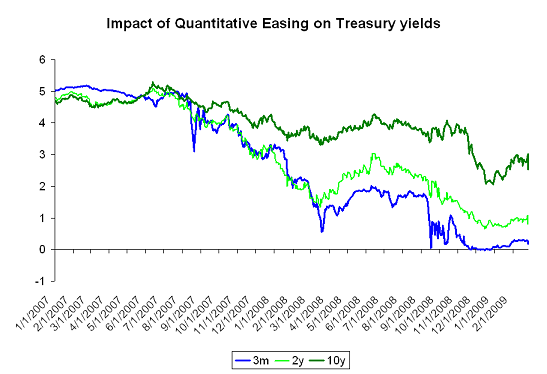 The first year of the crisis was marked by three upward spikes in the price -- and sharp falls in yield -- of short-term Treasury bills: one in August 2007 (subprime, quant funds), one in the spring of 2008 (Bear) and one in September 2008 (Lehman, AIG, Merrill and in all probability nearly every other financial institution but for the extension of a government backstop to the system).

The ten year Treasury bond didn’t really rally until late November, well after Lehman. It then soared (i.e. yields fell) in late 2008 before selling off this year -- before the Fed stepped in.

My guess is that gyrations in the ten year bond will mark the next stage of the crisis. Bank bailouts -- and counter-cyclical fiscal policies -- are very expensive. Last week the CBO confirmed what students of Reinhart and Rogoff already suspected. But the Fed rather clearly doesn’t want yields on the ten-year to head back to the 3.5-4.0% range of early last fall. Not when the economy is weak.

Christoph Schmidt is concerned about the risk of future inflation in the US. But the Fed -- like Jan Hatzius of Goldman and Dr. Hamilton of UCSD -- is far more worried about the immediate risk of deflation. And with so much spare capacity globally, I tend to agree with the Fed. German industrial production is now down over 20% y/y. Eurozone output is now almost 20% below its level a year ago. And parts of Asia -- like Taiwan -- are in even worse shape.

Did the Fed bail out China by buying Treasuries?