Emerging Voices features contributions from scholars and practitioners highlighting new research, thinking, and approaches to development challenges. This article from Juan Carlos Botero, executive director of the World Justice Project, is part of an ongoing Development Channel series on global justice and development.

To help fill this knowledge gap, the World Justice Project (WJP), where I serve as executive director, recently released its Rule of Law Index 2014, which among other issues measures the extent to which governments around the world provide information to their citizens. The report is based on 100,000 household and 2,400 expert surveys measuring over 500 variables on how the rule of law is experienced in everyday life in 99 countries.

The following chart shows a scatterplot of the WJP Rule of Law Index 2014 measurement of Open Government scores on the x-axis and the Global RTI Rating on the y-axis. The chart shows a negative correlation between the two datasets, highlighting the gap between the laws on the books and in practice. 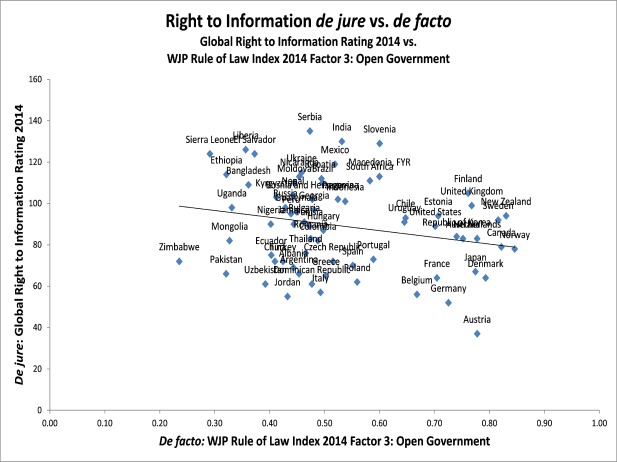 Take Austria and Germany, for example. They are among the worst performing countries in the world according to the Global RTI Rating, signaling very weak rights to information in these countries. However, these two countries perform very well in effectively delivering an open government and guaranteeing the right to information in practice, according to the WJP Rule of Law Index. On the other hand, Liberia, El Salvador, and Sierra Leon excel in the Global RTI Rating, but their performance in delivering information rights in practice is below average, according to the WJP Rule of Law Index.

Both a clear understanding of the existing legal framework and institutional arrangements, and how these laws and institutions are function in practice, are critically important to effective reforms efforts.  Of course indicators are only tools, which must be used appropriately. The limits of such data must be taken into account and, to the extent possible, several different types of information (official and privately-produced; local and global; qualitative and quantitative) must be considered in the decision-making and reform process.

It is also important to acknowledge how non-legal issues can sideline reform. India, for example, dramatically improved its freedom of information legislation over the past decade, but bureaucratic barriers, lack of resources, and competing policy priorities, among other causes, have led to partial collapse of the system. This shows that effective reforms are not a one-time push for change but rather an ongoing process of changing institutions and agendas. Laws, regulations, procedures, practices, and customs must be aligned for reform to truly take hold.

The Potential of Clean Cookstoves