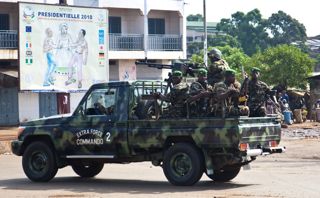 The uneasy calm during the first round of voting in Guinea’s presidential election is unraveling fast. Guineans and their international friends had hoped that the elections would end the political turmoil that has roiled the country since the stadium massacre last year. As of now, the latest round of violence shows the limits of elections in resolving deep-seated internal conflicts.

The electoral commission on Monday announced veteran politician Alpha Conde the victor over his main rival, former prime minister Cellou Dalein Diallo. As expected, Diallo has contested the results as fraudulent, and demanded a recount. With rising tensions between the two main ethnic groups, and reports of sporadic violence between supporters of the two candidates, the government has declared a state of emergency.

So far, violence in the Peul heartland regions of Pita, Labe, and Mamou has left dozens of houses destroyed and scores of people injured. Even though the two candidates have promised to reign in their supporters to avoid violence, it seems like their worst fears are being realized.

(h/t to Mohamed Jallow for helping with this)