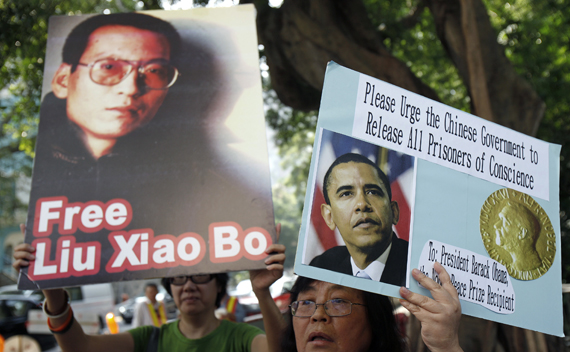 As decision day nears for the Nobel Peace Prize nominations, the Chinese government has gone on high alert. Long-time Chinese human rights activist Liu Xiaobo has once again been floated as a contender for this year’s Peace prize. Liu was trained as a scholar but has made his name by calling for political change—first as a Tiananmen activist and most recently for drafting Charter 08, a wide ranging manifesto for political reform in China. He is now in the midst of serving his third—and at eleven years his longest—prison term.

Thus far, Beijing’s response to Liu’s potential Nobel has been disappointing but unsurprising. China’s deputy foreign minister reportedly threatened Norway…not that Norway has anything to do with the Nobel decisions; and foreign ministry spokeswoman Jiang Yu claimed that Liu’s actions are "diametrically opposed to the aims of the Nobel prize."

Instead of wasting time trying to bully the committee into not awarding Liu the Nobel Peace prize, Beijing should seize the opportunity to ally itself with Liu’s and the Chinese people’s emerging political interests. There are noises for change everywhere in China. Over the past six months, Premier Wen Jiabao has been talking non-stop about the need for real political reform. Hu Shuli, editor of Century Weekly magazine, published a no-nonsense editorial claiming the time for political change is now. And China’s Internet is alive with discussions about the need to match thirty years of economic openness with a similar political push. There is even an online campaign to support Liu’s nomination underway among Chinese scholars and activists.

Liu falls squarely into a Nobel Peace Prize tradition—that of the human rights activist calling for peaceful political reform. Kim Dae Jung, Lech Walesa, and Aung San Suu Kyi are but a few previous such winners. Others such as Vaclav Havel and Nobel laureate Desmond Tutu are urging the Nobel Committee to award Liu this year’s Peace prize.

It’s time for Beijing to get on board as well. Awarding Liu Xiaobo the Nobel Peace Prize would be good not just for Liu but also for China’s continued economic growth, as well as its emergence and reputation as a global power—not to mention for all the other reformers in the country who are ready to come out of the closet.

The Seoul G20 Summit: Opportunity for and Challenge to Strengthening U.S.-Korea Relations