Note: This is a guest post by Paul Swartz. I appreciate Brad giving me the opportunity to fill in while he is on vacation.

Last Tuesday Timothy Geithner argued that a working economy requires a functioning banking system. This connection is conceptually clear to most people. If you can’t get a loan to go to school, buy a car or house or some consumer good, you are likely to delay or go without the consumption or investment.  Forgone spending meaning forgone income for someone else.

If tight credit is a part of the problem now, easy access to credit was a key source of the getting us where we are today. Consider the following graph – based on the Fed’s Flow of Funds. It shows a tight correlation between the growth in home mortgage credit and the appreciation in the housing market (for the more technically minded, the quarterly correlation since 1980 is over 60%).

Correlation is not causation but it makes sense that easy access to credit would contribute to a rise in home prices and that a lack of credit could facilitate a housing collapse. 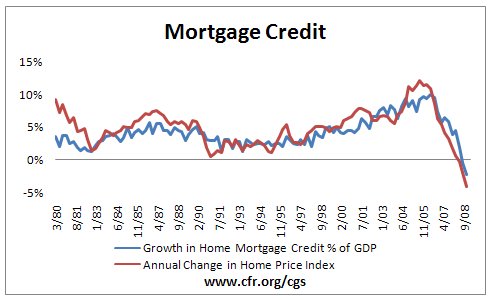 A valid question about this story is ‘did mortgage home prices appreciation increase credit or did credit increase home prices?’ Likely a bit of both; as home price appreciation accelerated more people had the capacity to use their home as an ATM and take out a home equity loan. Cash-out refinances average 37.2 Billion between 1991 and 2000 and 152.7 Billion between 2001and 2005. A similar question can be asked on the downside. Namely did falling home prices – through its impact on the banking system – lead to a tightening of credit, or was a tightening of credit a cause of the home price depreciation.

The Fed flow of funds data allows for a decomposition of the sources of mortgage credit. What stands out is the growth of “private label” mortgage securitization from 2002 through 2006 – and the subsequent collapse of the private securization market. The agencies (Fannie, Freddie) initially offset some of the contraction in demand for mortgages from private issuers. They have not – in large part due the high level of credit extension - been able to maintain positive aggregate home mortgage credit growth. To be fair they were pseudo private companies so it is not clear that they should have taken on a moderator role at all; in fact if they were simply trying to preserve their own existence they should have contracted credit not expanded it. It is interesting to compare the agencies moderating role in 1990.  At that time they offset the contraction in bank lending and home mortgage credit continued to growth. [See a combined graphic on the CGS home page]. 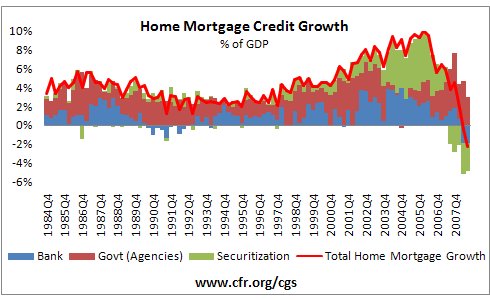 The agencies played - to a degree - a normalizing force as credit expanded as well. Unlike the credit contraction in 1990 they did not fully offset the credit creation which during the middle  of this decade was driven by securitization.  A full offset would have required the agencies to start withdrawing credit which would have been a structural and political challenge. Although the rise in the pace of mortgage credit growth a few years back should have set off a few alarm bells, so should have the fact that a subsidized and moderating branch of the credit market wasn’t extending any credit at all (it was being crowded out).

We have entered a negative credit growth environment; something which has not been seen for a long time.

On the December TIC data