In advance of next week’s third and final presidential debate, the Pew Research Center is out with the results of a new foreign policy poll. Pew finds Americans split on whether President Obama or Governor Romney would fare better in foreign affairs, skeptical of where things are headed in the Middle East and Afghanistan, and open (at least in theory) to talking tough to China on trade.

When it comes to who the public thinks will fare better on foreign policy, Obama barely edges out Romney. As the chart below shows, the public gives Obama a slight edge on “making wise decisions about foreign policy,” handling Iran’s nuclear program, and dealing with political instability in the Middle East. Romney has a nine-point edge when it comes to handling trade with China. 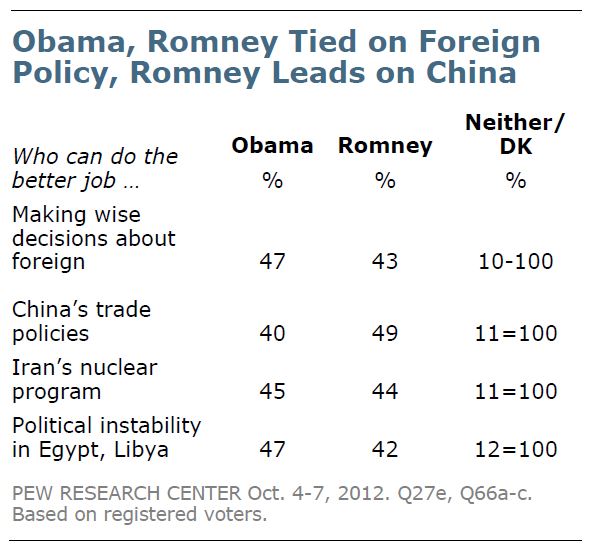 The bad news for Obama in these numbers is that he had a fifteen-point lead over Romney on foreign policy just a month ago. Whether it’s because of events in Syria, the administration’s continually changing story about the Benghazi attack, Obama’s poor performance in the first debate, or some combination, the trend is not the president’s friend. But that can change with one debate.

Here are other poll highlights:

Of course, standard polling caveats apply in spades when it comes to foreign policy. Question wording is a particular problem. Support for a showdown with Iran would likely be significantly lower if Pew had asked whether the public favored war with Iran to keep it from going nuclear. Likewise, the public often lacks knowledge and context for evaluating foreign policy questions. So if Pew had asked respondents whether they supported getting tougher with China even if Beijing retaliated and some American workers lost their jobs as a result, support for the get tough option undoubtedly would have sagged.

That said, you can bet dollars to donuts that both campaigns are poring through the Pew poll and plenty of others like it as they prep their candidates for Monday night’s debate. The political incentive for both candidates looks to be to talk tough and tout American leadership but to steer clear of anything that suggests they are eager to plunge the United States into more conflicts overseas.