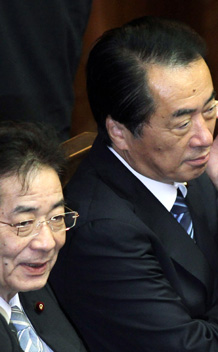 I have just returned from a week in Tokyo, where I attended the annual CSIS-Nikkei conference on U.S.-Japan relations. As I noted in our CFR.org roundup on how Washington should respond to Beijing’s recent assertiveness vis-a-vis its neighbors, I found that many in Tokyo continue to be focused on the after effects of the Senkaku incident.

Last week, I watched Japan’s politicians debate the intricacies of the two-week crisis, and was struck with how little of the debate seemed to be about China. Rather it was focused on Japan itself. The debate began with opposition party critique of Japan’s “weak” diplomacy (yowagoshi) in the face of Chinese pressure, but by week’s end, the Kan government had deftly resorted to imagery of willow branches to express their sense that Japan needed to demonstrate more flexibility in its approach to a rising China. Cabinet Secretary Yoshito Sengoku argued—in the face of heated critique and considerable derision—that Japan needed to demonstrate a diplomacy that was both graceful (shinayaka) and determined (shitataka). This conversation kept me close to my Japanese-English dictionary as I sought to understand the nuances afoot in this linguistic battle over diplomatic style. Yet, I could not help but feel the conversation was all about Japan—a sharp contrast to debates in Washington about what was prompting the erratic Chinese behavior of late.

On the diplomatic agenda are high level meetings between Japanese and Chinese leaders later this month. But anti-Japanese demonstrations have broken out within China, countered by Japanese taking to the streets in Tokyo. Today, media reports of Chinese fishery patrol vessels being dispatched again to the same waters suggest the possibility of a new round of confrontation in and around Japan’s maritime borders. Japan’s coast guard will be preparing for that possibility, and indeed have been operating on increased surveillance patrols since the Chinese fishing trawler rammed their ships on September 7th. Japan’s maritime self defense force (MSDF) has also sent aircraft to the region to monitor Chinese fishing and other activities.

What is needed now is a realistic conversation of what caused the clash, what motivated Beijing’s behavior, and what improvements might be made in the Japanese effort next time. In terms of the narrow goal of policing maritime boundaries, does Japan have the capacity to effectively monitor its southwestern waters? China has a far larger fleet of vessels (short of its navy) that it can send to the region—fisheries patrol ships, resource survey ships, coastal patrols, etc. The preference for maintaining policing patrols by Japan’s coast guard rather than involve the MSDF remains. Yet, there is still work to be done in articulating the kinds of tasks best left to the Coast Guard, and delineating also the point at which Japan’s MSDF might need to be involved.

Still unanswered, of course, is the broader diplomatic question as to whether or not China has abandoned the bilateral effort to negotiate a more collaborative approach to East China Sea resource development. The joint development plan heralded as almost completed during the Hu Jintao-Yasuo Fukuda summit in May 2008 seems to have vanished as the Chinese government ran into difficulties in moving the summit agreement forward to the conclusion of an implementing agreement. Former Foreign Minister Katsuya Okada’s effort to inquire about the delay during his meeting with Chinese Foreign Minister Yang Jiechi this past spring only occasioned a curt rebuff.

Add to this bilateral diplomatic agenda the newest and most troubling dimensions of the interaction. The Chinese government’s use of the rather blunt instruments of embargoing rare earths and other much needed minerals to Japan as well as arresting Japanese businessmen in China suggests a more difficult negotiating moment for Japan. Like other advanced industrial societies, Tokyo depends heavily on access to Chinese supply of rare earths. The well-publicized meeting of Japan’s cabinet-level economic and foreign policy leadership in July with its Chinese counterparts made little progress on gaining Chinese assurances of a greater supply under Beijing’s new quota system. But to embargo export in the midst of a political spat raised serious concerns for countries that depend heavily on Chinese supply of this critical commodity. Germany, in fact, has asked that this aspect of Chinese behavior be taken up in the G-20 meeting as a concern of all industrial societies.

Likewise, outside Japan, most of us who live in democratic societies recognize the pressures on governments faced with the sudden arrest of our citizens abroad. Politically motivated sanctions on corporations and individual citizens working in China make it particularly difficult for our governments to confront China. Equally disturbing is the questionable role of Chinese government controls over the use of the blogosphere and the popular demonstrations that seem to be more and more common today within Chinese society. These demonstrations of Chinese nationalism, if we can use such a broad term, appears an increasingly widespread social phenomenon, and yet it also seems as if the Chinese government uses domestic frustration as an instrument in its diplomatic conflicts.

But this time, I felt that Japan’s debate over the Senkaku incident seemed overly focused on Japan’s own diplomatic limitations. This latest round of confrontation between Tokyo and Beijing should be scrutinized and reviewed with the aim of improving crisis management the next time round, yet in the Diet conversation there seemed little interest in analyzing the interaction or in devising prescriptions for improvement. Rather Japan’s faults were magnified, and the current government chastised. Today’s opposition in Japan was yesterday’s government, and with a half century of diplomatic experience in dealing with China, one would think there would be greater room for advice and constructive feedback than in the past.

This is, in fact, a moment of opportunity for Tokyo, and if recognized as such, Japan could forge a new diplomatic effort to assert its interests and values through a variety of regional and global mechanisms for cooperation. Issue by issue, Japan should seek out opportunities and partnerships for collective action as it seeks to address its concerns.

In its bilateral relations with China, the graceful elasticity of the willow imagery works in the sense that Japan should be patient and supple in its response to Beijing’s assertiveness. Yet, in its broader diplomacy, Japan should not allow itself to become rooted in familiar postwar notions of self-restraint or hesitancy regarding its global and regional influence.

This is not a moment for Japan to sit still or to be overly indulgent in its domestic debate over who to blame. Instead of framing this as a Chinese test of Japan’s power, Tokyo should have the confidence to question the longer term intentions of this newly emerging “assertive” China. Multiple avenues of global cooperation are available for this conversation. Japan has used these avenues with purpose—and to great effect—for decades, and so is now well positioned to demonstrate what it means to be a “responsible global stakeholder.”