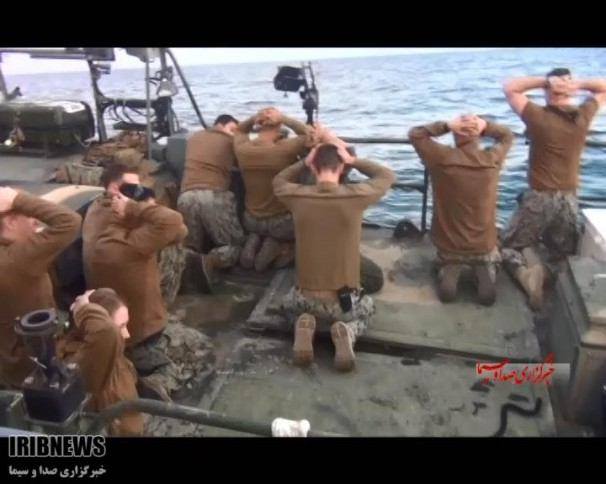 This photo tells us a great deal about American foreign policy today.

Human Rights Watch, not known as a right-wing group, has noted that it appears to violate international agreements prohibiting the use of photos or videos of military detainees for propaganda purposes. Moreover, the entry into Iranian waters (if that happened) by a boat that had lost its engines is obviously "innocent passage" under international law.

The new relationship with Iran is at the top of his agenda. The old-think concept of "allies" is out. Consider this from the AP:

Since the beginning of the year, Kerry and Zarif have spoken by phone at least 11 times, according to the State Department. They’ve focused on nuclear matters, Iran’s worsening rivalry with Saudi Arabia and peace efforts in Syria.

By contrast, America’s top diplomat has talked to Saudi Foreign Minister Adel al-Jubeir only twice. He has consulted once each with Saudi Deputy Crown Prince Mohammed bin Salman, Jordan’s King Abdullah and the foreign ministers of Britain, Egypt, France, Germany, Russia and the European Union.

Once upon a time, during the Clinton administration, the foreign visitor who was invited to the White House most often--13 times--was not Tony Blair or some other ally; it was Yasser Arafat. We know what Clinton got for all that courting: nothing, and the failure of his Camp David peace efforts.

Such treatment of enemies, by Clinton then or Kerry and Obama now, and such treatment of allies never ends well. When the United States appears unable to differentiate between enemies and allies, it gets fewer allies and its enemies grow stronger. Iran is an enemy of the United States, which has killed hundreds of Americans in terrorist attacks over the decades since 1979 and most recently in Iraq.

Throughout the Middle East and no doubt more widely, this photo is half of a moment that will deeply unsettle America’s friends. The other half is the Obama administration’s reaction to this humiliation: to welcome it and thank Iran for it. America’s friends are without doubt thinking "If this is how the Americans react to their own humiliation through an aggressive act, how will they react when we are in danger?"

There’s an old proverb that goes something like this: There are some people so foolish that when you spit in their face they think it’s raining. In the Persian Gulf today, it isn’t raining. Iran just spit in our face, and humiliated the United States; there is no other interpretation of the photo above. If the United States Government cannot even realize what happened, our own interests and those of our allies will be further compromised by Iran in the year ahead.