Geo-Graphics posts in July 2010 and 2012 showed that Paul Krugman’s devaluation-driven “Icelandic Miracle” was nothing of the sort – a figment of his having chosen the most favorable possible starting date (Q4 2007) for his Baltic (and Irish) economic-performance comparisons.  Move it forward or back, and Krugman’s story collapses like a warming arctic ice shelf.

Our 2012 post particularly upset him - the poor thing being so weary of having to deal with benighted economic illiterates.  In suggesting that Krugman look not just at how his four chosen countries had performed relative to their pre-crisis peaks, but how they had performed since they hit bottom, we were apparently guilty of knowing nothing about business cycles – which to Krugman’s mind means believing that positive output gaps can actually exist.

Now that the IMF’s Olivier Blanchard, Mark Griffiths, and Bertrand Gruss have explained to him in a 39-page Brookings paper what we failed to get through to him in a simple sentence last year – that Latvia, whose inflation rate topped 15% in 2008, was producing well over its potential output at its pre-crisis GDP peak (undermining Krugman’s post-peak analysis) – Krugman has changed his tone on the Baltics abruptly.

(One can’t credibly call Olivier Blanchard an idiot, now, can one?)

Last year Krugman was peeved at having to defend his “Icelandic Miracle” claim against evidence that the competition had actually done as well or better, without devaluation; now, however, faced with more of the same evidence from a different source, he’s content just to quarantine Latvia as “a more or less unique case.”

Here it is, folks: Iceland, whose currency lost half its value against the euro in 2008, vs. Estonia, Latvia, and Ireland, all of which were euroized or pegged to the euro over the entire period . . . 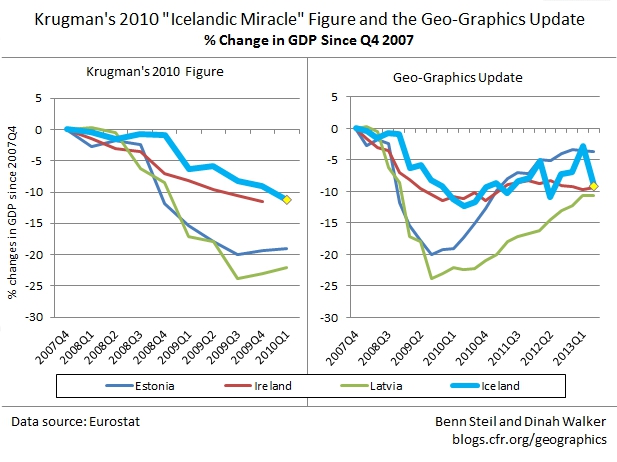 In the updated figure, Estonia comes out on top, by a lot – well above Iceland, which performed no better than Latvia or Ireland, even using a starting date chosen by Krugman to make Iceland look as good as possible.

In short, Krugman credited Iceland’s post-crisis devaluation for an economic “miracle” that clearly never was. In fact, Iceland is now facing a new foreign-debt repayment crisis brought on by the capital controls Krugman extolled.

Hark, O ye Greeks: Beware pundits touting miracles.  The floating krona didn’t bring one to Iceland, and the drachma won’t bring you one either.

VoxEU: The Collapse of Iceland's Banks

Read about Benn’s latest award-winning book, The Battle of Bretton Woods: John Maynard Keynes, Harry Dexter White, and the Making of a New World Order, which the Financial Times has called “a triumph of economic and diplomatic history.”

Why the Labor Data Point to a September Fed Taper