The transformation of the U.S. energy market created by the new extraction techniques for oil and gas has some predicting a renaissance for U.S. manufacturing based on lower, stable energy costs. In today's Policy Initiative Spotlight, Renewing America contributor Steven J. Markovich examines those claims and argues that the impact will likely be modest.

The United States is experiencing a boom in oil and natural gas production. High global oil prices and new technologies have spurred the development of unconventional sources such as deepwater oil drilling and hydraulic fracking. The rapid adoption of these new extraction techniques has roiled energy markets, and the environmental effects are still being determined. But will they improve U.S. competitiveness?

According to the Energy Information Administration (EIA), in the past three years domestic production increases have outpaced demand increases. Domestic crude oil production increased 5.9 percent, while demand only increased 0.2 percent. During this period, world oil prices rebounded after crashing with the start of the recession; oil futures are trading at more than double their price in January 2009.

Oil trades on a global market, so a surge in domestic production is unlikely to shrink oil prices in the United States, or increase national competitiveness. Additionally, many unconventional U.S. sources of oil are only economical with high prices. Natural gas is a regional, not a global market. As a gas at normal temperatures and pressures, natural gas is difficult to trade overseas, so prices are more localized.

According to the EIA, the United States produces over 90 percent of the natural gas it consumes, and imports most of the remainder by pipeline from Canada. Liquefied natural gas (LNG) does allow global trade, but that technology requires substantial infrastructure investment in specialized terminals to chill natural gas until it becomes a liquid. The United States currently has few LNG terminals, and LNG was responsible for less than 1 percent of the U.S. market.

Domestic natural gas production rose by 11.6 percent, and demand rose 7.3 percent over the past three years; much of the growth in natural gas consumption is in new electrical plants. This growth in production was due to an explosion in the production of shale gas through hydraulic fracking. According to the EIA’s Annual Energy Outlook 2012 shale gas’ share of U.S. production doubled from 15 percent to 30 percent over that period; the EIA predicts the United States will become a net exporter of natural gas by 2021. 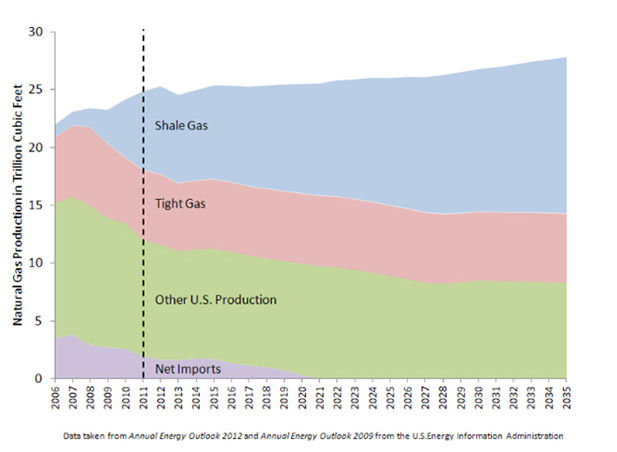 Shale gas growth and this year’s mild winter have pushed U.S. natural gas prices have down by more than half since January 2009. Meanwhile, Japan’s idling of its nuclear plants has driven LNG prices in Asia to more than ten times U.S. prices. This may give the United States a competitive advantage in energy intensive industries.

The size of this advantage—particularly for manufacturing—was the subject of a recent blog post by CFR’s Michael A. Levi. Levi cited reports that indicated only one tenth of U.S. manufacturing industries had energy as more than 5 percent of the cost component. Petrochemical manufacturing is one industry that could experience high growth, because natural gas could be used as a feedstock for many products. But this industry is relatively small and employs around 24,000 in the United States, according to the Bureau of Labor Statistics. It is a relatively high wage occupation, however, with an average annual pay of $103,000.

Increased domestic production can also reduce the trade deficit by displacing imports. Over the past three years, the value of net natural gas imports fell from $10.3 billion to $7.2 billion, according to the EIA. Rising prices have caused the value of net oil imports to rise, even though the United States imports almost 12 percent fewer barrels of crude oil than it did in 2009, a $41 billion dollar savings at current prices.

Greater domestic production could also spur job creation in supporting industries. Levi’s recent post pointed to an IHS-CERA report that argued that in 2010, shale gas supported a total of 71,000 ancillary jobs, and projected that would rise to 124,000 by 2020.

Simply put, the expansion of domestic oil and gas production is not—itself—likely to lead to a manufacturing boom in the United States. While firms will enjoy lower electricity and heating bills from lower natural gas prices, few industries will see a substantial decrease in production prices because energy is usually a small portion of total costs. However, shifting from foreign to domestic fuel sources trims the trade deficit, and boosts related industries at home.

Trump’s Trade Wars, and Now COVID-19, Are Unraveling Trade As We Know It

Healing and Paying With National Service