The innovations that will drive a knowledge-based economy and employ the next generation of high-skilled workers require a national commitment to research and development, and no nation has made this a higher priority than Israel. The country of 8 million invests more money in R&D per GDP than any other. And while the United States still leads the world in total R&D spending, it ranks ninth when economies are weighted. 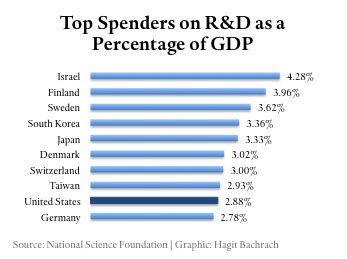 Israel has received no shortage of praise for its innovative culture in recent years, a success perhaps best articulated by former CFR fellow Daniel Senor in his book Start-Up Nation. In addition to the highest R&D to GDP, Israel also boasts the most start-up companies per capita, and the most scientists and technicians per capita, according to government figures.

Interestingly, Israel does not provide R&D tax credits like most of its peers in the OECD, including the United States. Rather, it promotes these activities primarily through individual grants to competing applicant firms. The main program, administered by the Office of the Chief Scientist, finances up to 50 percent of approved R&D expenditures. Unlike tax incentives that solely depend on market forces, the grants allow the government to closely vet and monitor R&D projects.

Some critics allege this type of control amounts to government's inefficient "picking winners and losers," but others like Gregory Tassey, Senior Economist for the U.S. National Institute of Standards and Technology, say that public-private R&D partnerships are critical in an increasingly international marketplace, particularly when it comes to primary and applied research.

"U.S. industry has regularly increased its investment in short-term R&D to respond to growing competitive challenges in the global economy," he notes, "while regularly decreasing planned investments in the more radical research that provides the technology platforms for competing in future technology life cycles."

In general, the case for greater federal support for R&D is based on a recognition that the private sector will underinvest in R&D because firms are unable to capture all of the benefits from these investments. In particular, governments are often greatly involved in R&D activities, like pure research, that do not have immediate commercial applications.

Of course, greater federal R&D spending is not a panacea. Israel also has the requisite human capital to put this money to work. The country not only leverages the high-tech training provided to its military personnel (service is compulsory), but it also benefits from a wealth of researchers in the Jewish diaspora and educated ex-Soviet immigrants that moved to Israel in 1990s.

But despite the aforementioned successes, experts say Israel's policies are far from perfect. One challenge has been keeping the economic benefits of these policies, such as job creation and income growth, at home. "Many Israeli start-ups are sold to the U.S. market and get absorbed into global firms, never really expanding in Israel," says OECD senior economist Mario Cervantes. "This is expected given the small size of the internal [Israeli] market, but it does raise questions about how much of the returns from innovation end up back in the economy."

Hurricane Sandy: A Lesson in Why Governments Really Matter

Competing with China: Lessons From the Belt and Road

A Year on, the "Color of Covid" Still Matters