As discussed in previous blog posts in this series, good governance and human rights are central aspects of global development.  Fundamental to human freedom, these objectives are both an end in themselves and a means to an end, and should be included in the post-2015 global development agenda. In this regard, guaranteeing Civil Rights, Political Rights, and Personal Security is a critical development goal.

This goal meets the criteria for goal setting—it embodies a consensus normative and ideational objective, is actionable and serves a “booster” function for an important but neglected issue, is universally applicable, and appropriate targets and indicators would strengthen accountability.

Measuring performance on this goal is not as impossible as it may appear at first glance. This post discusses indicators for civil and political rights. My next post tackles indicators for personal security.

Given that civil and political rights targets aim to hold governments accountable for fulfilling international human rights treaty obligations, assessment should be external to government authorities, impartial, and conducted by legitimate international bodies charged with monitoring rule of law and human rights commitments. Although civil and political rights are inherently complex and interdependent, two potential “bellweather” cross-national indicators, based on UN expert reports, are:

Do these UN expert reports meet the selection criteria for indicators? 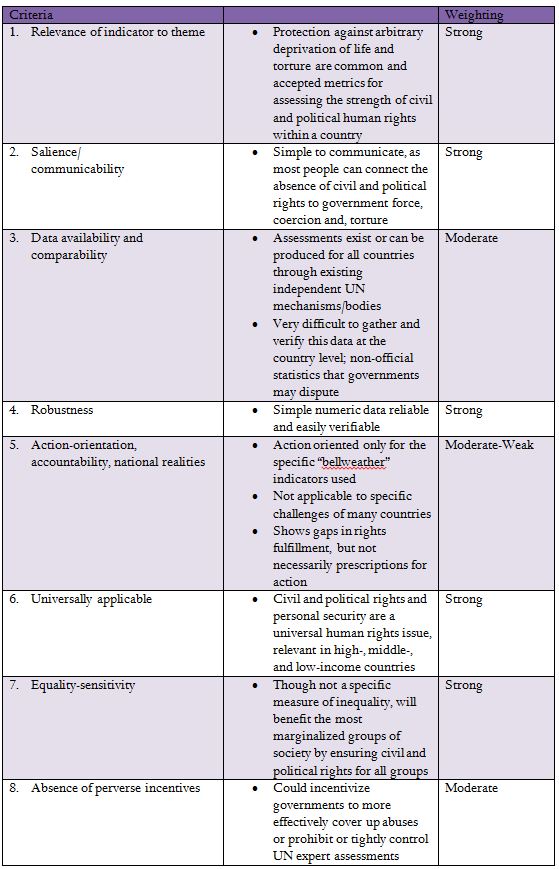 UN expert reports could be complemented by public perception and expert surveys.  Most relevantly, the World Justice Project Rule of Law Index assesses countries’ performance on the nine areas of: limits on government power, corruption, order and security, fundamental rights, open government, regulatory enforcement, civil justice, criminal justice, and informal justice. The scores are built from assessments of the general public and local legal experts to measure the extent to which countries adhere to the rule of law in practice. The score derived from public perception surveys regarding fundamental rights would be an excellent indicator for this goal.

Does the World Justice Project Rule of Law Index meet the selection criteria for indicators? 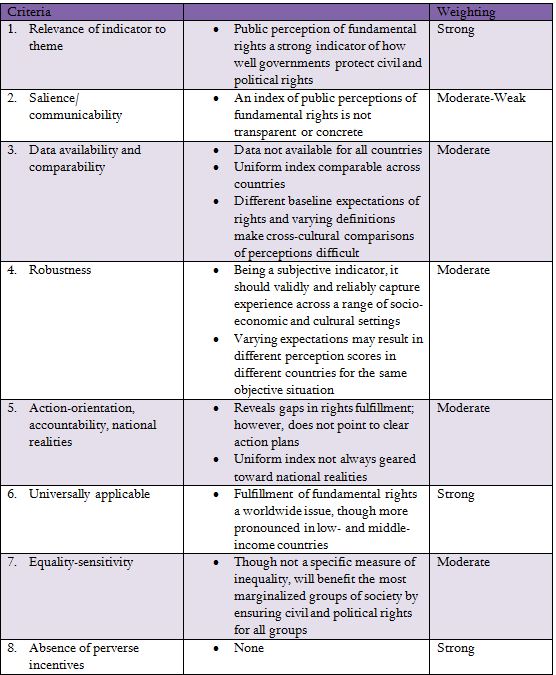 The Power of Parity: Closing the Gender Gap in the Workforce