Skip to main content
Public College Costs Up, State and Local Support Down

Yesterday I posted some good news on the higher education front: The just-released Times Higher Education (THE) 2013 World Reputation Rankings show that no country can match the United States when it comes to great research universities. We are number one by a country mile. Today, however, brings some bad news: the State Higher Education Executive Officers Association released a report showing that America’s public universities face stiff challenges in staying on top of the global higher education pile.

Here are four big findings from the report:

These figures are driven most immediately by the lingering effects of the financial crisis of 2008-2009. But they also reflect a decades long trend in the United States by which students are paying a larger and larger share of their higher education costs. As the figure below shows, in 1987 tuition generated roughly a quarter of all educational revenue. Today it accounts for nearly half of it. 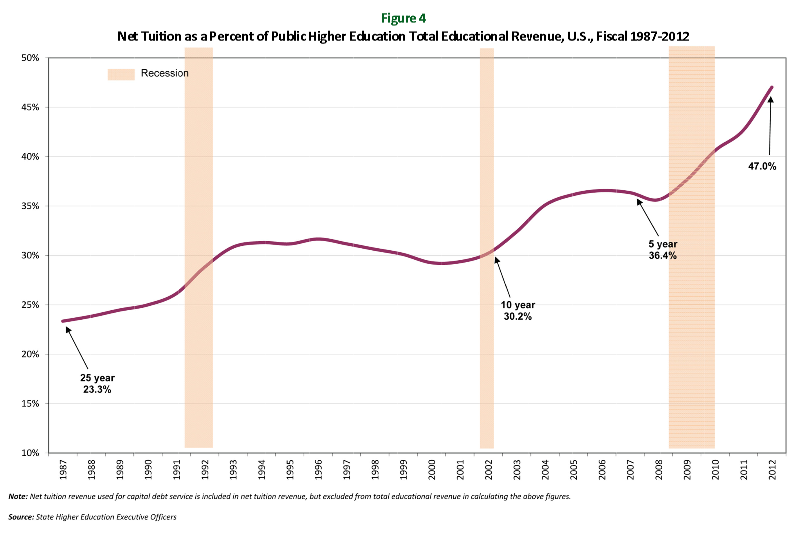 The evidence on the latter score is troubling. While tuition has been going up, real median household income in the United States has fallen since 1999. Average student loan debt is up sharply over the past decade, and loan default rates are rising. Given these trends, it is not surprising that polls show that more and more Americans doubt that college is affordable.

Rising college costs are one reason that the United States has tumbled down the global rankings in terms of the percentage of adults age twenty-five to thirty-four holding college degrees. That’s not a good sign for America’s long-term economic health given that globalization has put a premium on highly skilled workers and left unskilled workers to battle the whims of the market.

The tight budgetary environment doesn’t necessarily spell doom for schools like Berkeley, UCLA, and Michigan that populate the top of THE’s reputational rankings.  Many of them are quasi-private universities already given how much state support has fallen over the past several decades. (The University of Virginia, for example, gets only about six percent of its academic budget from the Commonweath of Virginia.) The big research universities will continue to leverage their reputations to win research grants, develop partnerships with the corporate world, and raise money from alums who get weepy hearing the first few bars of their school’s fight song.

And sure, MOOCs—massive open online courses—might revolutionize higher education. They might unleash huge budgetary savings that enable colleges and universities to do more with less.

But those benefits won’t come for a while, if they come at all. For now, public colleges and universities will be doing less with less. And that can’t be good for America’s long-term economic competitiveness.