ClimateWire (via The New York Times) reports that several key players are considering a push for a utility-only cap-and-trade system as part of an energy bill. That could be a wise move, if it’s done right.

First the main substance. Take a look at this plot of emissions reductions under Kerry-Lieberman as projected by the EPA: 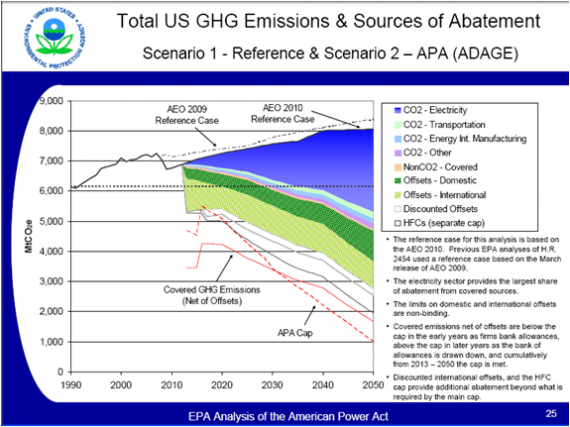 You’ll notice that almost all of the emissions reductions from U.S. energy use come from electric utilities, not just in the early years, but through 2050. Transportation, manufacturing, and “other” (my guess is mostly direct energy use in buildings) make up a very small fraction. A utility-only bill, then, should be able to get most of the reductions in U.S. emissions from energy use that an economy-wide bill would, but without some of the complexity and stigma. For this reason alone, utility-only should receive serious consideration.

Now for the potential problems. I can see at least four:

There is, of course, a fifth problem. It has been very tough to tie cap-and-trade to public outrage over the oil spill. A cap-and-trade system that deliberately does nothing about oil will be even harder to sell from that angle.

Is Drilling a Relief Well in Advance the Answer to Deepwater Blowout Risk?

Oil Price War: Is U.S. Shale The First To Blink?