Peter Fisher (Blackrock, formerly of the Treasury and the New York Federal Reserve) as quoted by the Wall Street Journal’s David Wessel:

“The idea of risk dispersion is nice in theory, but in practice it depends on who risk gets dispersed to. It turns out that we dispersing risk it into strong hands who could hold it through volatility. Rather we were dispersing it to weak hands who couldn’t hold it, and ended up adding to the volatility.”

Who were those weak hands?

Some credit hedge funds – whose use of leverage left them exposed to volatility.

And stronger – but not quite-as-strong as advertised – hands like UBS..

And a lot of US banks.

“Because subprime mortgages were the weakest credits in the mortgage spectrum, they were the first to become impaired when house price started to fall. And because a surprisingly high fraction of the exposure to those mortgages was held by the Street, this is where the first signs of crisis first appeared.”

One obvious question is why the US regulators didn’t have a better idea that the Street was holding subprime risk before the crisis hit.

I suspect part of the answer is that the US regulators didn’t look closely enough at the capital flows data. At least not with a sufficiently critical eye.

They say enormous purchases of risky bonds by investors abroad – and specifically investors in the UK. They then assumed that risk had been dispersed internationally.

They didn’t probe closely into who exactly was taking the risk. It clearly wasn’t savers in the UK. The UK is a net borrower on a global scale – not a net lender. And it turns out that the central banks buying through London generally were buying Treasuries and Agencies, not riskier forms of debt.

A lot of the London buyers seem to have been vehicles sponsored by American institutions – or European institutions like UBS who funded their purchases of risky assets with short-term dollar borrowing.

The authorities in the UK shouldn’t get a free pass either. Their desire to court international business has meant that London has become a data black hole. An enormous amount of money flows through London but the UK’s balance of payments data provides next to no information about the sources of that money. The UK’s attitude may be good for business, but it has resulted in less transparency in the global financial system – and more difficulty tracking who has assumed key financial risks.

Still I suspect that US authorities might have been able to track the ultimate holders of a lot of US subprime risk if they hadn’t bought into their own rhetoric about risk dispersion.

The result of the implosion in the subprime market, though, aren’t in doubt: “international” demand for US corporate credit has collapsed. 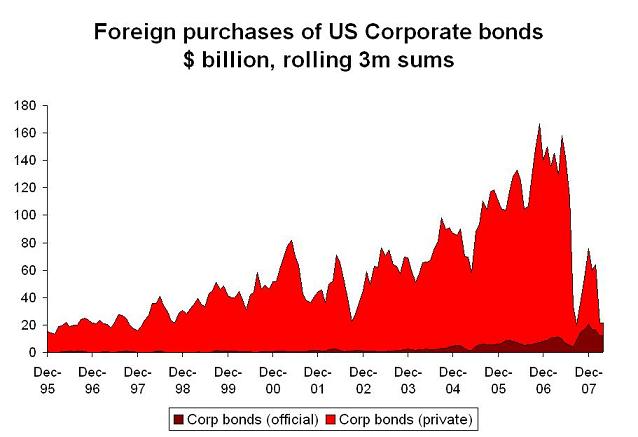 The funny thing is that a lot of this international demand wasn’t really international. That is why – I suspect – the sharp fall in foreign demand for corporate credit hasn’t prompted an enormous fall in (net) capital inflows to the US. Offshore vehicles that borrowed in the US money market (or offshore dollar market) to buy US debt padded the data on gross cross-border capital flows, but did not providing much net financing to the US.

Unlike the actors who took on the risks associated with subprime mortgages, the actors who had been willing to assume dollar risk (almost as bad a bet over the past five years as 06 vintage subprime) really were strong hands. Central banks and sovereign funds are still adding to their dollar assets at an incredible pace. And they haven’t stopped adding to their bet on the dollar despite large losses (realized and unrealized).