On Friday, Paul Krugman interpreted China’s call for a new reserve currency as a sign of weakness:

“But Mr. Zhou’s speech was actually an admission of weakness. In effect, he was saying that China had driven itself into a dollar trap, and that it can neither get itself out nor change the policies that put it in that trap in the first place.”

China is, according to Krugman, hoping for a magical solution that will “rescue China from the consequences of its own investment mistakes.” I agree.

Krugman rather provocatively argues that “China acquired its $2 trillion stash — turning the People’s Republic into the T-bills Republic — the same way Britain acquired its empire: in a fit of absence of mind.”

I agree, at least in part.

I would be surprised if the State Council received a memo from the PBoC back in 2004 saying “$500 billion in reserves isn’t enough for a country with a closed capital account; let’s aim for $2 trillion by the middle of 2008.”

At the same time, China’s leaders made a series of choices that resulted in the accumulation of huge quantities of reserves. Even if China’s leaders didn’t plan to hold so many dollars, they weren’t willing to make the policy changes needed to avoid accumulating their current stash. 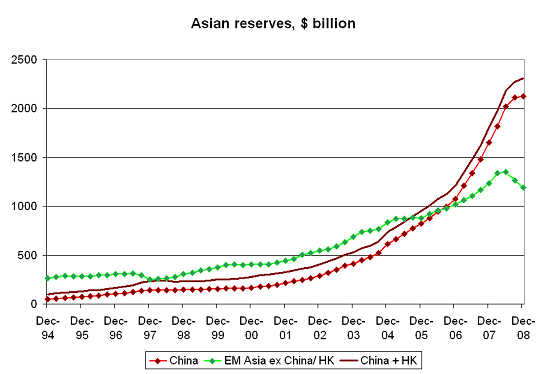 The growth in China’s reserves started in 2002, and then really started to accelerate in late 2004. It consequently can be attributed in large part to China’s decision to maintain its dollar peg even after the dollar started to depreciate from 2002 on.

China could have moved decisively away from the dollar at various points from 2002 on; if it had, it would have ended up exporting a bit less, running a smaller current account surplus and building up far fewer reserves.

In late 2003 it was clear that the reversal of hot money flows, a lending boom and the export boom had combined to push up China’s inflation rate. China faced a choice. It could have allowed the credit boom to continue, knowing that the resulting rise in inflation would lead to a real appreciation that would offset that real depreciation created by China’s link to the depreciating dollar. Or it could have allowed the RMB to appreciate, reducing hot money inflows and inflationary pressure. It opted, instead, to limit loan growth and to tighten fiscal policy while keeping the peg to the dollar. That policy worked in a sense: lending growth slowed, inflation came down and imports fell. But it also created China’s large current account surplus.

In the summer of 2005 China had another opportunity to reverse course. But it opted for a mini-revaluation against the dollar – a change that had no real economic impact. China maintained a very subdued pace of appreciation against the dollar for another two years even as its current account surplus soared. That predictably pushed up China’s reserves

And in early 2007, China made another choice: when it opted to create the CIC and allow SAFE to take more risks, it implicitly recognized that it had more reserves than it needed. Rather than letting SAFE buy equities, it could have allowed the RMB to appreciate to a market clearing level.

At key points then, China shied away from the decisions that would have allowed it to avoid accumulating so many reserves. China’s leaders probably didn’t intend to accumulate $2 trillion in reserves, but they weren’t willing to make the policy choices needed to change China’s growth trajectory either.

And now China has a problem. Its dependence on exports meant that it ended up importing unemployment from the rest of the world just when China’s own property boom soured. And it so happened that the costs of relying on exports for growth became obvious at the same time that the costs of accumulating more reserves than China needs also became very visible.

China’s leaders likely hoped big investment gains would help offset their currency losses. Now, though, they realize that they bought equities and other risk assets at the top of the market, and thus added to their losses. China’s leaders have noted the criticism that has been directed at the CIC. They now that fessing up to additional losses won’t be popular –

China’s 2007-2008 bet on global equities and riskier bonds likely cost it north of $50 billion -- it all depends on exactly how much of its portfolio it put into risk assets. To be sure, it is in far better shape than Ontario Teacher’s Pension Plan, which lost a staggering 40% on its fixed income portfolio. Most of China’s reserves were in safe government bonds, and those bonds increased in value over the course of the crisis. But as Arvind Subramanian notes, China’s currency losses will eventually dwarf its equity market losses.

Those losses shouldn’t be a surprise. Currency losses on unneeded reserves are the price a country pays for subsidizing its exports with an undervalued exchange rate. But that doesn’t make it any easier to accept the losses – or to handle the inevitable argument that China’s leaders squandered China’s reserves.

China’s leaders are setting the stage to argue that these losses are the fault of bad US policies. They aren’t. They are the result of China’s own policy choices. Subramanian correctly observes "[China] is seeing itself as the victim of the dollar standard when it has been, for a long time, a beneficiary and promoter of this standard." China’s leaders, though, have no incentive to recognize this.

But even if China didn’t explicitly plan to build up to many reserves, it now has them -- and China’s leaders are no doubt interested in using them to increase China’s influence.

It isn’t hard to think of creative ways China could use its reserves to increase its global position. China alone could provide all the extra $500 billion the IMF now needs if it wanted to do so. Or it could set up a Chinese monetary fund to compete with the IMF.

To date, China has been fairly cautious, generally turning down countries that trekked to Beijing to appeal for emergency loans – though the recent expansion of RMB swap lines suggests that China may now be willing to take more risks. One potential problem: China would need to explain to its own citizens why it is using its reserves to help other countries rather than doing more at home.*

And then there is the elephant in the room: Will China’s large dollar holdings -- and the fact that is is now the United States largest creditor -- give it any influence over US policy?

I have thought about this question for some time now.

China’s leverage comes not from the fact that it has a lot of dollars, but rather from the possibility that it might stop adding to its dollar portfolio (when its reserves are growing) or sell its dollar portfolio (when its reserves are stagnant). China is now big enough to have an impact on the market. SAFE holds around 15% of the outstanding stock of marketable Treasuries, for example. The $400 billion of US financial assets China bought in 2008 constitute a meaningful share of both net and gross inflows to the US.

But China can only exercise leverage if it is willing to accept the consequences of scaling back its dollar bet – a fall in its exports, and an upfront financial loss on its existing reserve portfolio. If China isn’t willing to accept those costs, it is – as Dr. Krugman puts it – stuck.

In some sense, it makes financial sense for China to take its financial lumps sooner rater than later. Buying dollars to keep the dollar from falling (against the RMB) allows China to avoid taking losses now, but that implies that China is effectively taking on the risk of a much larger loss in the future. So far, though, China’s leaders have always preferred to risk a bigger loss in the future than take a certain loss today – and to defer shifting the basis of China’s growth away from exports rather than to force adjustment immediately. Unless those preferences change, China doesn’t have much leverage.

At the same time, China’s leaders – and the United States leaders – should be thinking through the consequences of letting current trends continue.

China added $1500 billion to its reserves (counting the PBoC’s other foreign assets, but excluding the funds shifted to the state banks and the CIC) from the end of 2004 to the end of 2008, and probably added close to a trillion dollars to its portfolio.

China cannot easily shed its existing dollar exposure. But it also doesn’t have to maintain a set of policies that imply large current account surplus, and ongoing pressure to add to its dollar portfolio.

Andrew Batson’s Wall Street Journal story on Governor Zhou’s call to create a new global currency was the most emailed story on the WSJ’s website for a while. The FT’s stories on this have also gotten a lot of attention.

China’s $1.5 trillion or so in US portfolio** increasingly makes both sides of the Pacific nervous. Letting that portfolio grow to $2 trillion, or $2.5 trillion, won’t make the underlying issues go away. It isn’t healthy for China to rely so heavily on exports for its growth, or for the US to rely so heavily on the government of a country that now seems ambivalent about the dollar for financing.

Let’s hope that China’s stimulus proves strong enough for China to lead the rebound in the global economy – and for Chinese demand to emerge as a true engine for global growth.

** The Setser/ Pander estimate of $1.7 trillion looks a bit high, given the latest survey data. $1.6 trillion seems more realistic, if one assumes that China has around $120 billion in US corporate bonds (The TIC data shows that China has been a significant buyer of corporate bonds, but those bonds don’t show up in the survey). The latest survey data suggests the dollar share of China’s portfolio is probably closer to 65% than 70%, though I am not totally confident of this.