Back when it was fashionable to talk about the end of macroeconomic volatility, it was also common to note that volatility had disappeared from the currency market. The FT’s resident financial anthropologist Gillian Tett :

A couple of years ago – or before banks started to go bust – economists sometimes liked to talk about a phenomenon they christened The Great Moderation. This was the idea that the 21st-century financial system and global economy had become so stable and sophisticated that dramatic swings in activity had seemingly disappeared. Volatility, in other words, was supposed to be an issue of the past.

Alas, the return of macroeconomic volatility (Jeff Sachs’ back of the envelope calculations suggest that the pace of global GDP growth could fall sharply next year) has also led the return of currency market volatility.

The yen -- a favorite source of low-cost credit -- has soared. Or, put differently, a host of currencies have fallen sharply against the yen. Just look at moves in the euro and the Australian dollar against the yen. 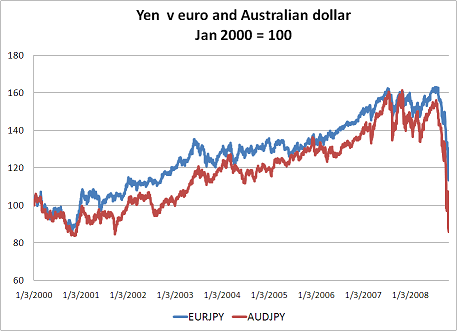 (thanks to Paul Swartz for help with the graph)

The euro was too strong v the yen -- and most Asian currencies. There was a reason why Asian exports to Europe were growing so rapidly. The euro’s strength v most Asian currencies was the most obvious currency misalignment in the world for the past several years. It just took a long time to correct.

But when it corrected, it corrected fast. No doubt too fast for Japan’s comfort. No wonder there is now talk of the resumption of coordinated G-7 currency intervention.

The US dollar isn’t up by as much as the yen against the euro and the Australian dollar, but it has risen significantly too. The US isn’t going to be able to count on global demand to help make up for a shortfall in internal demand. If the United States non-oil trade balance continues to improve, I increasingly fear that it will be because imports are falling faster than exports. And that isn’t good for anyone.

The case for a bigger IMF