The Washington Institute for Near East Policy awards Steven A. Cook’s The Struggle for Egypt the top prize in its annual Book Prize Competition

(Washington, D.C.) Steven A. Cook’s The Struggle for Egypt, a chronicle of modern Egypt that culminates in the revolution that overthrew Hosni Mubarak, has been awarded the gold medal in The Washington Institute’s 2012 Book Prize competition, the research institution announced today. Cook, the Hasib J. Sabbagh senior fellow for Middle Eastern studies at the Council on Foreign Relations, will receive a $30,000 prize for his achievement, one of the most lucrative awards for nonfiction writing in the world.

The Washington Institute Book Prize is given annually to three outstanding new books that have illuminated the Middle East for American readers. "Through this competition, The Washington Institute seeks to acknowledge the very best new works on the region and to encourage authors and publishers to produce books of unique quality and insight," according to Institute Executive Director Dr. Robert Satloff. The winners are selected by an independent panel of foreign policy specialists from academia and journalism. 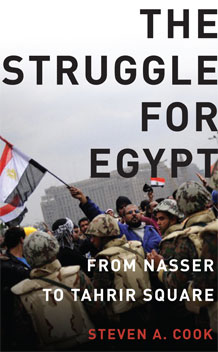 In making the award to Cook, the judges wrote: "Steven Cook’s timely and highly readable book weaves expertly through Egypt’s modern history, from British failures, through Nasser’s pretensions, to Sadat’s peacemaking. Cook offers a sobering reminder of how economic stagnation, bad governance, and religious extremism make for an unpredictable brew—and why the struggle for Egypt’s future is destined to continue."The Struggle for Egypt is published by the Oxford University Press.

The silver prize winner is Hirsh Goodman’s The Anatomy of Israel’s Survival, published by PublicAffairs. The judges describe the book as "an insightful, personal and impassioned analysis of Israel’s tenacious existence in a troubled Middle East." Goodman, a veteran journalist and senior research associate at the Institute for National Security Studies at Tel Aviv University, will receive a $15,000 award.

Capturing the bronze prize is Patriot of Persia by Christopher de Bellaigue, the Tehran correspondent of theEconomist. According to the judges, Bellaigue’s "elegant book reconstructs the complex dynamics behind the American- and British-devised coup against Mohammed Mossadegh in 1953 -- an intervention remembered to this day, often bitterly, by all Iranians." Bellaigue will receive a $5,000 prize for the book which was published by Harper.

The 2012 Washington Institute Book Prize panel included Dr. Michele Dunne, director of the Rafik Hariri Center for the Middle East at the Atlantic Council; Dr. Robert J. Lieber, professor of government and international affairs at Georgetown University; and David E. Sanger, the chief Washington correspondent of the New York Times. The competition is administered by Dr. Martin Kramer, The Washington Institute’s Wexler-Fromer fellow and a senior fellow at the Shalem Center in Jerusalem.

The Book Prize, now in its fifth year, has been generously supported since its inception by Washington Institute trustees Shelly and Michael Kassen.

Submissions for the 2013 Book Prize will commence after January 1, 2013. Publishers may submit English-language nonfiction books on any subject that bears on the modern Middle East or America’s role in the region published between May 1, 2012 and May 1, 2013. The deadline for submissions is May 1, 2013. Complete details are available at http://www.washingtoninstitute.org/book-prize.

ABOUT THE WASHINGTON INSTITUTE:The Washington Institute for Near East Policy seeks to advance a balanced and realistic understanding of American interests in the Middle East and to promote the policies that secure them through in-depth research and cutting edge analysis.

This press release from the Washington Institute has been reprinted with the Institute’s permission.