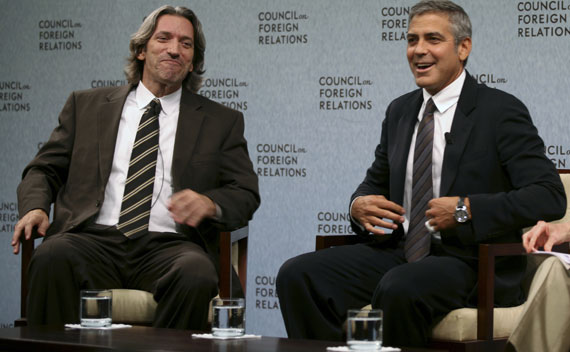 The New York Times Sunday Magazine ran a profile yesterday by Daniel Bergner of John Prendergast, the co-founder of the Enough Project, an effort to end genocide and crimes against humanity.  The article is worth reading for four reasons beyond John’s fascinating personal story.

1.  A possible preview of the future. The break-up of Sudan could be a major foreign policy story in 2011.  Southern Sudan is scheduled to vote on January 9 on whether to secede.  If the vote goes forward—and that’s by no means a certainty—southerners, most of whom are blacks practicing Christianity or animist religions, likely will vote for secession.  The question is whether the largely Arab and Muslim North would allow the South to go peacefully.  More than two million people have died over the past fifty years in fighting in Sudan.

2.  A glimpse into the merger of celebrity, publicity, and advocacy. We normally think of lobbying as an “inside game,” with advocates working the halls of Congress and plying lawmakers with campaign donations.  Prendergast, however,  is a practitioner of the “outside game.”  He has worked with celebrities such as Angelina Jolie, George Clooney, and Don Cheadle to generate publicity that reshapes public opinion and nudges policymakers to act.  (As you can see from the photo, John and George have spoken at CFR). As Prendergast puts it in a quote I would love to have shared with students when I was teaching “Introduction to American Foreign Policy”at the University of Iowa, “If you don’t get people in Des Moines to write their congressman or senators, you’re not going to get anything done in godforsaken regions like eastern Congo and southern Sudan.”

Does the outside game actually work to change government policy?  Many times, no.  After all, governments have many ways and many reasons to deflect public pressure.  I doubt that President Obama’s recent steps to intensify his administration’s efforts on Sudan stemmed directly from Prendergast’s efforts.  Samantha Power, the senior director for multilateral affairs and human rights on the staff of the National Security Council and the award-winning author of A Problem from Hell, probably got the nature of Prendergast’s influence about right when she told Bergner that what Prendergast has succeeded in doing is “creating a political space; he’s putting political wind in the sails of people who care about this.”  Even presidents need help.

3.  A reminder that the desire for justice can clash with the search for peace. Many of the militia leaders in the southern secessionist movement have blood on their hands, often the blood of fellow southerners.  Prendergast now finds himself working with militia leaders whose misdeeds he has chronicled and denounced over the course of his career.  In the perennial debate over justice versus peace, he sides with peace.  Others might decide differently.

4.  A concrete example of a critical yet hard-to-answer foreign policy question. How much influence does the United States have over events in Sudan?  As Bergner tells it,  Prendergast’s “faith in America’s capacity to stave off war in Sudan is all but absolute.”   Andrew Natsios, a former special envoy to Sudan and former head of the U.S. Agency for International Development, worries that such claims exaggerate American power and encourage opposition groups to “think they’ll be rescued by American influence—and this can distort negotiations, sometime disastrously.” The historical evidence, much of it compiled by my former colleague Alan Kuperman, suggests that Natsios’s fear is well justified.  One can only hope that American diplomats are keeping the unintended and potentially perverse consequences of American action in mind as they craft their diplomatic strategy.

TWE Remembers: The Roosevelt Corollary to the Monroe Doctrine