My last post noted that inflation-adjusted natural resource prices—even for exhaustible resources—tend to fall over time. This trend surprises people who think that prices are doomed to rise indefinitely because it gets more and more expensive to mine/grow/pump these resources in larger volumes over time. So what’s behind the downtrend?

There are a few explanations economists point to.

First, the income elasticity of demand for most commodities is typically lower than for manufactured goods. As a result, increases in income tend to translate into greater demand growth for processed goods than for commodities, and hence price gains for finished goods outpace those for raw materials.

Second, a long-term decline in transportation costs has had a more deflationary impact on commodities than on other goods. These costs ordinarily comprise a higher proportion of the delivered price of commodities than of manufactured goods.

Fourth, productivity growth in the agricultural and mining sectors, which has been better overall than for manufactured goods, has tended to lower prices for processed goods in relative terms. For agricultural goods, productivity gains have allowed for rising global supply without the need to resort to less fertile land, while in the case of mineral goods, better ways of detecting and producing them have deepened the global reserve base and in some cases reduced production costs despite the accelerating rate at which these goods are pulled from the ground.

Finally, the quality of manufactured products has improved over time. This relative shift in quality (as well as the difficulty of quantifying it, which prevents economists from isolating this variable) may contribute to the relative price decline of commodities in real terms.

The graphs below showing the production and prices of a sample of three non-renewable resources—copper, zinc, and aluminum ore—reinforce the fact that growing production of finite goods simply does not mean that their real prices are doomed to rise as they become more scarce. The positive correlation between production and prices that you might expect just doesn’t exist over long stretches of time. 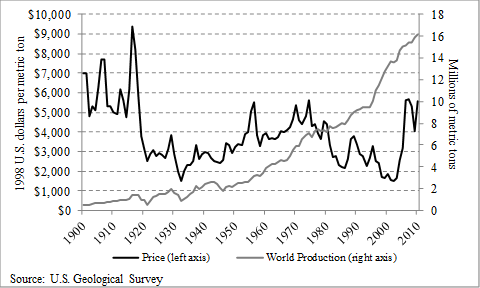 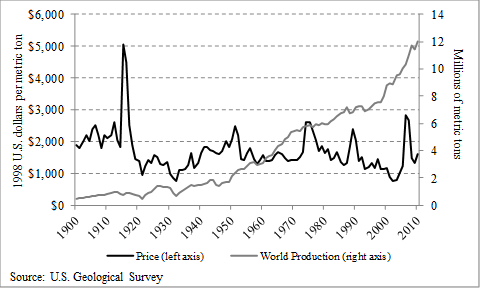 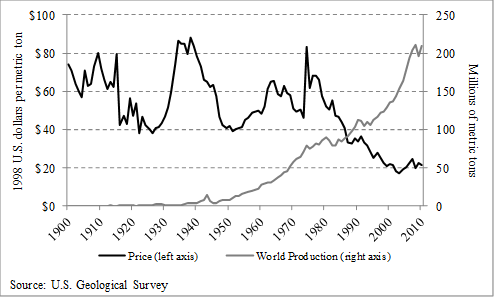 Though copper production has grown tenfold over the last century, inflation-adjusted prices are still lower than what they averaged between 1900 and 1920. Of course, there have been periods where real copper prices have trended upward, such as between 1930 and the mid-1970s. Occasionally prices have jumped sharply, as they did during World War I and then again by Asian industrialization in the mid-2000s. Still, the net effect of a hundred years of mining has been for inflation-adjusted prices to slope downwards.

Zinc shows a similar trajectory. Production of the metal has climbed relentlessly since 1900; prices have jumped now and again, but over the long term, prices have stagnated at best or even declined.

Aluminum ore, barely mined at all until the 1950s, is now extracted at a rate of more than 200 million metric tons per year. Yet prices haven’t followed suit. They have seen periods of massive price rises, only to come crashing down. Their unrelenting slide since 1974 has resulted in a downward net trend over the last 112 years.

The bottom line is that rising demand for non-renewable resources, reflected in greater production over time, does not necessarily mean continual increases in real prices, despite perennial prophecies to that effect. More and more can be produced while real prices fall.