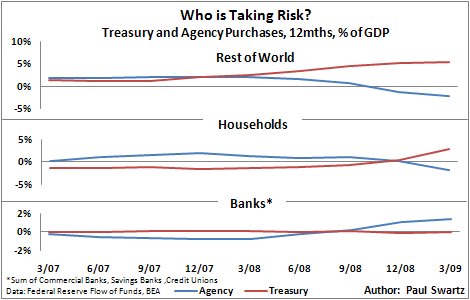 This chart shows the yearly change in purchases of securities backed by U.S. government-sponsored enterprises (GSEs) and in securities issued by the U.S. Treasury. In late 2008 and early 2009, U.S. households and the rest of the world began selling GSE-backed securities, such as those issued by Fannie Mae and Freddie Mac, and began purchasing more Treasury securities, which are considered lower-risk. American banks, however, moved in the opposite direction, increasing their purchases of GSE-backed securities. This suggests a growing appetite for risk in the banking sector.