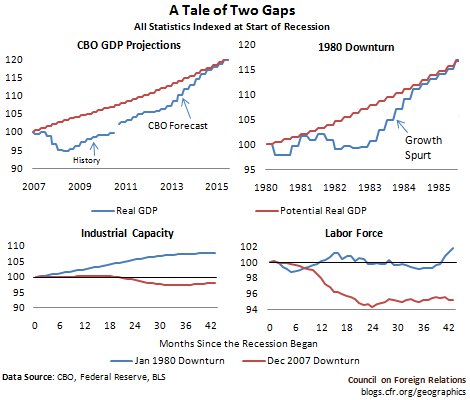 In its most recent update to the Budget and Economic Outlook, the Congressional Budget Office projects robust GDP growth of 4.4% in 2014 and 5.0% in 2015.  This projected spurt is unexplained, but appears to have been reverse-engineered from the belief that the United States should return to the trend growth it seemed to be following prior to the financial crisis—as can be seen in the figure upper-left above.  There is precedent for this: after the double-dip recession of the early 1980s, strong growth in 1983 and 1984 quickly closed the gap between actual and so-called potential levels of output—as can be seen above, upper-right.  But the CBO would be wrong to assume that economic history is destined to repeat itself.  In the early 1980s, industrial capacity continued to expand throughout the recession, while the labor force remained at the same level.  The recent downturn, however, has seen declines in both industrial capacity and the labor force of 2% and 5%, respectively—as seen in the bottom figures.  There is little justification for believing that potential economic activity has continued to grow while critical inputs to economic activity—labor and capital—have shrunk.  If potential output has shrunk along with them, then the U.S. faces considerably greater fiscal challenges than the CBO’s analysis implies.