Wednesday, March 22, is World Water Day, an internationally-celebrated day dedicated to collaboration between the United Nations, governments, and non-governmental organizations to tackle the world’s water crisis. Ensuring universal access to safe water by 2030 is identified as a critical component of the 2030 Agenda for Sustainable Development’s mandate to eradicate extreme poverty.

The global water crisis is not only deadly—lack of access to clean water claims more lives each year than AIDS, breast cancer, terrorism, and all the world’s conflicts combined—but is incredibly economically costly.

And the opportunity cost of water shortage, contamination, and inadequate infrastructure falls disproportionately on women and girls. In communities around the world, women and girls spend much of their days walking long distances to seek out safe water, fetching or drawing it, and carrying heavy containers back to their households.

In sub-Saharan Africa, for example, an average trip to collect water covers over 3 miles and takes 33 minutes each way—and in a number of countries, such as Mauritania, Somalia, Tunisia, and Yemen, the trip takes longer than an hour each way. In South Africa alone, women collectively walk the equivalent distance of sixteen times to the moon and back every day just to collect and transport the water their families and communities need to survive.

Water availability also affects whether or not girls—especially those from poor, rural, or marginalized families—are educated. The gender gap in water-related work begins early in life: young girls between the ages of five and nine spend an estimated 40 million more hours a day on household chores than boys, and girls aged ten to fourteen years old spend 120 million more hours each day. If, like in many sub-Saharan African communities, fetching water takes several hours, it considerably shortens the time girls have available for schooling and disincentives families from prioritizing girls’ education.

The burden of water collection is not only felt by women and girls themselves, but has far-reaching effects on broader prosperity. The 200 million hours women and girls spend every day collecting water globally is time that could be spent carrying out income generating activities and contributing to the formal economy. Indeed, experts estimate that lack of ready access to clean water causes annual economic losses of up to 7 percent of GDP in some countries: in India, for example, it’s estimated that the time women spend every year fetching and carrying water is equivalent to a national loss of income of 10 billion rupees, or $160 million. 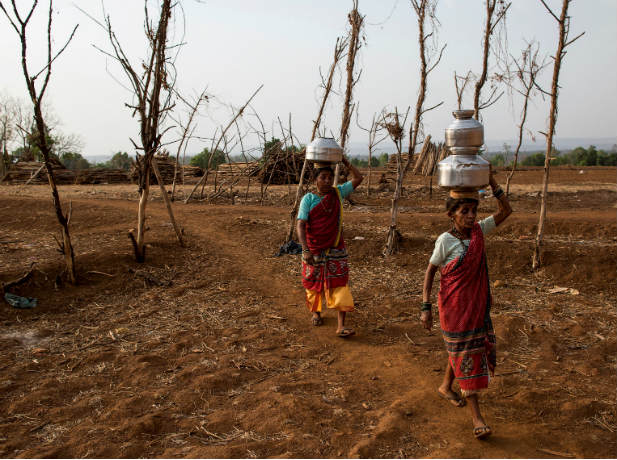 Given these strong connections between lack of access to clean water and other development areas—including gender equality—governments, multilateral organizations, and private sector leaders are investing in projects to build and repair wells, bring water sources closer to communities, and install solar pumping technologies. Evidence suggests that these efforts would be strengthened by investment in women’s access to and ownership of water tools and technologies: when women run water cooperatives or own water pumps, for example, they are significantly more likely than men to invest profits and time saved back into their communities. In one program in Nigeria, a social enterprise model for women-run water centers not only reduced the time spent collecting water for over 6,000 women, but successfully provided better access to clean, affordable water for over 30,000 people and led to improved economic, health, and educational outcomes across the community.

Efforts geared toward improving the management of the world’s resources and extending access to safe water should thus capitalize on the central roles women already play in water management. It is clear that lessening the burden of unpaid water work that falls on women and girls is not only essential as a matter of human rights—it unleashes a range of positive economic and development outcomes.