Wednesday marks one year since Navy Seal Team 6 killed Osama bin Laden. He won’t be missed here in the United States. And according to the latest poll conducted by the Pew Global Attitudes Project, he won’t be missed much in Muslim-majority countries either.

Pew asked Muslims in Egypt, Jordan, Lebanon, Pakistan, and Turkey whether they had a “favorable” or “unfavorable” view of al-Qaeda. As you can see in the table below, lopsided majorities in all five countries opt for “unfavorable.” 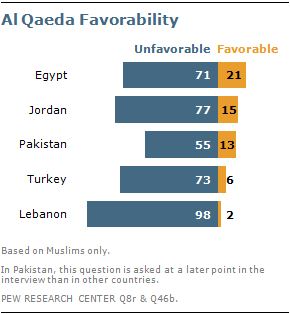 This doesn’t necessarily mean that Egyptians, Jordanians, and Pakistanis suddenly approve of American foreign policy. Other polling by Pew shows they don’t. But the numbers are a marked improvement from six or seven years ago when majorities in Jordan and Pakistan gave bin Laden a thumb’s up.