Skip to main content
What to Read on Mexican Politics 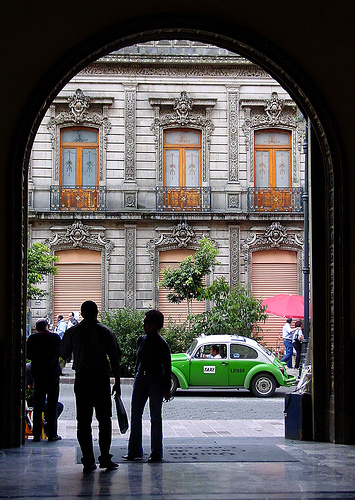 What are the 6 books you find most useful in thinking about Mexican politics? Foreign Affairs asked me for my list. I’d be interested in yours…

Mexico’s rise on the American foreign policy agenda should not come as a surprise. Over the last generation, deepening business, personal, cultural, and community relations have drawn the two countries closer together. Trade between them has tripled, with Mexico becoming the United States’ third-largest commercial partner. Flows of people, always part of the bilateral relationship, skyrocketed: over four million Mexican citizens have headed north in the last decade, while over a million U.S. citizens have migrated south, forming the largest nonmilitary community of American expatriates in the world. At the start of the twenty-first century, Mexico is still forging its political, economic, and social identity. It has undergone a true democratic transformation, and its three political parties now compete in clean and transparent elections. But it remains unclear whether Mexico will follow a path of growth, stability, and market-based democracy or one of instability, corruption, and crime. What is certain is that understanding Mexico -- where it came from, how it got there, and where it might be headed -- is vital to U.S. interests.

In this book, now in its fifth edition, Roderic Ai Camp, one of the preeminent scholars of Mexican politics, deftly guides readers through more than 200 years of political evolution in Mexico, analyzing the events and concerns that created the Mexican state one sees today and exploring both the continuities and changes in that state’s relationship with societal organizations and interests. Camp focuses on Mexico’s extended transition to democracy, including reforms to the electoral process, the expansion of political participation, and the subsequent shifts in power among the various branches of government. Those interested in delving deeper can consult Camp’s specialized works on many of the themes presented, such as the recruitment of political leadership and popular political attitudes. But Politics in Mexico, drawing on decades of experience and innovative research, provides a comprehensive overview of the main issues and forces affecting the country today.

This exhaustive history, written by one of Mexico’s best-known intellectuals, chronicles nearly two centuries of Mexican politics, from independence to the early 1990s. After identifying major themes underlying the country’s political and social identity -- its colonial legacy, its mestizo population, and the early power of the church -- Enrique Krauze turns to a leader-driven historical narrative, examining the lives of Mexico’s various strongmen and presidents, who, from the battlefield to the executive office, shaped Mexico’s political development. This personalized dynamic has faded with democratization, but the memory and vestiges of it remain relevant in Mexican politics today.

Opening Mexico: The Making of a Democracy. By Julia Preston and Sam Dillon. Macmillan, 2005.

Written by Julia Preston and Sam Dillon, the New York Times correspondents covering Mexico in the late 1990s, this readable narrative provides a thoughtful analysis of the country’s democratic opening. Spanning the period from the devastating 1985 earthquake in Mexico City to the 2000 presidential elections, the authors investigate the economic changes, security threats, and political intrigue crucial to understanding the shifts that occurred in Mexican politics. The book explores the many pressures on the old one-party PRI (Institutional Revolutionary Party) system, the individuals and organizations that pushed for change, and the events leading up to democracy’s final breakthrough: the election of the opposition PAN (National Action Party) presidential candidate Vicente Fox.

First Stop in the New World: Mexico City, the Capital of the Twenty-First Century. By David Lida. Riverhead, 2008.

Spanning 570 square miles and home to more than 20 million people, Mexico City is the largest metropolis in the Western Hemisphere. Even as federalism has decentralized power to Mexico’s states, the capital remains the political, cultural, and economic center of the nation. In this journalistic account, David Lida offers many telling vignettes that capture politics, culture, and life in el D.F., the federal district. He lays out the intricacies of Mexico’s economic inequalities, its sex and age discrimination, its traffic jams, and its deep-seated corruption. But he also illuminates the thriving high- and low-brow art scenes, from well-respected galleries and theaters to lucha libre (Mexico’s version of professional wrestling). Lida explores the country’s cabarets, cantinas, and street food, as well as the coexistence of traditional markets and Wal-Marts that make the city -- and Mexico -- what it is now.

The United States and Mexico: Between Partnership and Conflict. By Jorge I. Domínguez and Rafael Fernández de Castro. Routledge, 2001.

At the turn of the twentieth century, strongman Porfirio Díaz lamented, "Poor Mexico! So far from God, so close to the United States." Some still share that view, but whatever the tone of bilateral relations, all would agree that Mexican politics cannot be understood in isolation from the United States. Expertly dissecting the complicated relationship of these two neighbors, Jorge Domínguez and Rafael Fernández de Castro analyze the impact of the end of the Cold War, internal changes within Mexico and the United States, and the creation and strengthening of bilateral and multilateral institutions over the last two decades. The authors show how these multiple factors led to closer ties in areas as diverse as security, the economy, and the border.

The Closing of the American Border: Terrorism, Immigration, and Security Since 9/11. By Edward Alden. Harper, 2008.

Mexico’s possible futures cannot be fully understood without a thorough comprehension of U.S. concerns over and approaches to border management. Edward Alden skillfully investigates the transformations of U.S. border policy since 9/11 -- in particular, the rise of immigration enforcement as the predominant means of protecting the United States against further terrorist attacks. This shift has had strong repercussions for Mexico, because of the 2,000-mile-long border it shares with the United States, its estimated ten million citizens living in El Norte, and the deep economic and social links between many U.S. and Mexican communities. It also has had significant consequences for policymakers trying to develop more effective bilateral relations, as this mindset influences approaches to issues of organized crime, trade and economic development, and the health and safety of populations on both sides of the border.