Back in say 2000, a very large share of China's trade was with the US -- so the RMB/ dollar mattered more, in some sense, than the RMB/ euro.  I hesitate slightly to state that because it is fairly clear that the RMB's move against the euro did matter even then, as the RMB's depreciation set in motion a huge expansion in European imports from China.  One of the reasons why China didn't export all that much to China back in say 2000 was the RMB's strength against the euro.

But now China trades as much with Europe as with the US, and its trade with the emerging world is growing as well.  One undeniable fact about China is that it is much less dependent on the US market than it used to be.   And that means that the evolution of the RMB against a host of other currencies matters.   Ask the Koreans (though right now they seem more focused on the yen).   Ask the Thais.   Ask the Indians.  Ask the Brazilians.

The following chart -- which was inspired by a suggestion from former Treasury Secretary Summers -- shows moves in the RMB against a  40% dollar/ 40% euro (used as a proxy for all European currencies) and a 20% yen basket.   That roughly matches the current composition of China’s trade with the G-3 once adjustments are made to account for the large share of China's trade that goes through Hong Kong. 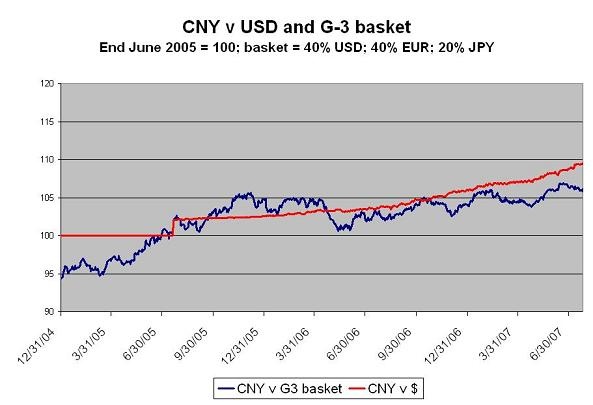 The financial press has a tendency to report the RMB's cumulative appreciation since China broke its peg in mid-2005 (a little under 10%).   It doesn't usually report how the RMB's appreciation over that period compares with moves in other currencies.   It turns out that the RMB has appreciated by less than the euro or the Australian dollar (meaning China has depreciated against both those currencies). 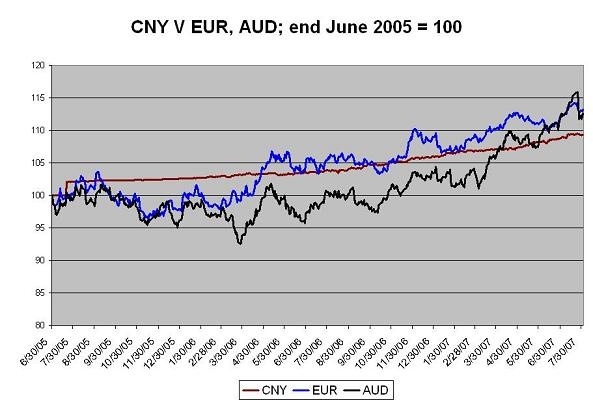 It also turns out that China has appreciated by less than most other emerging Asian currencies. 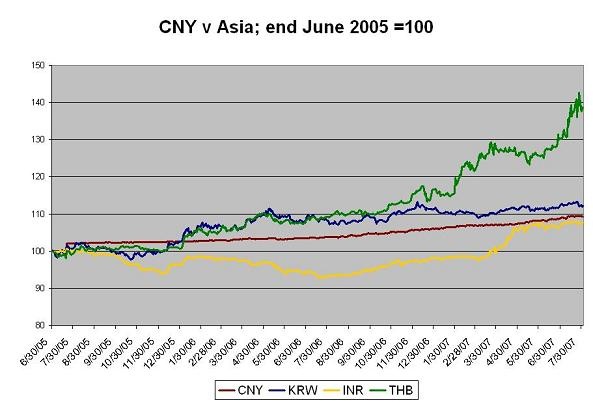 The main exception is the Indian rupee (INR) -- and if you look just at 2007, the rupee clearly has appreciated much faster than the RMB.  Indian inflation is also a lot higher than Chinese inflation, which adds to the pace of the rupees real appreciation.

I didn't include a chart showing the yen -- as there is no doubt that the RMB has appreciated relative to the yen, and relative to the Taiwanese dollar as well.   But I don't think I am slanting the data.  Look at figures 16 (for changes in the nominal RMB v the Asian NIEs) and especially figure 40 on p. 42 (for movements in the real effective exchange rate of a set of emerging Asian economies) in this the ADB's most recent Asian Economic Monitor.    In real terms, the RMB has depreciated since early 2000, while the currencies of all other emerging Asian economies have appreciated.

The RMB looks pretty flat since the end of 2005 on their graph too.

I also decided to take a look at moves in the nominal RMB v. a set of relatively low inflation economies since the end of 2000.  The following graph shows the cumulative appreciation (or depreciation) of a range of currencies against the dollar relative to their levels at the end of 2000/ very beginning of 2001.  To make them stand out, the euro is the thick blue line, the RMB is the thick red line and the yen is the thick black line.  The yuan looks sort of red-blue for a while (i.e kind of purple) because both China (think red) and Malaysia (thin blue) pegged to the dollar for a long time. 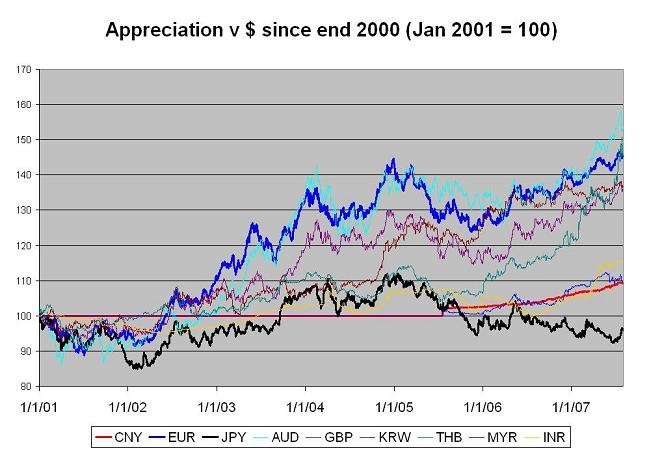 The RMB has appreciated by less against the dollar than almost everyone else, with the huge exception of the yen and the GCC countries, which still peg to the dollar. 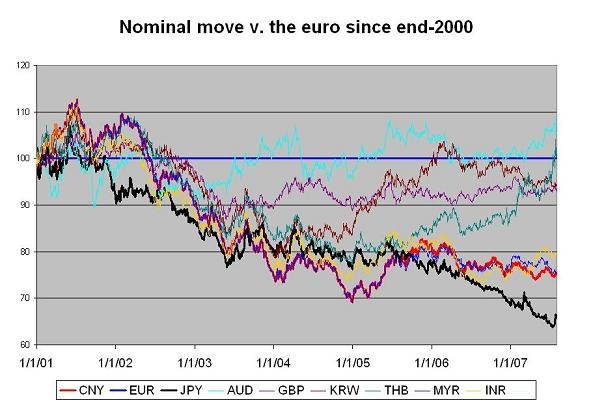 Personally, I think it is very hard to build a case why China should be at the bottom of this graph along with Japan.   Japan has been mired in a long period of subpar growth.  China is booming.

Let's go back to the first graph -- the one that showed the RMB v an index of the G-3 currencies.   It turns out the RMB appreciated significantly against that basket in 2005, largely because the dollar rebounded.    The next graph shows what would have have happened if China had sustained that same pace of appreciation over the last 18 months: the RMB would be about 15% stronger than it is now. 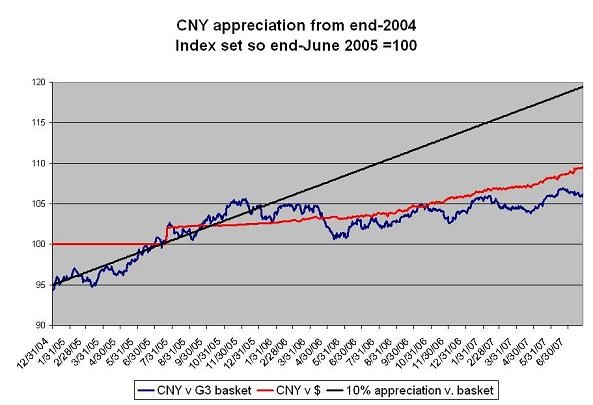 I suspect my criticism of China's policy has gotten more strident over time.  That reflects my sense that China policy makers missed a major opportunity over the past few years.    They opted not to maintain the same pace of appreciation China experienced in 2005.  That, in my view, one of the reasons why China's current account surplus will be truly enormous this year.   It is also one reason why China is on track to add almost as much to its reserves in 2007 as the entire world added to its reserves in 2005.   Chinese reserve growth is now truly unimaginably large.

UPDATE:  Here is an example, from Businessweek's Brian Bremner, of the tendency to equate moves in the RMB/ $ with moves in the broader RMB.

"The Chinese currency yuan has appreciated about 9% since July, 2005, when Beijing replaced its currency peg to the dollar with a semi-fixed system enabling the yuan to move within narrow trading bands against a basket of currencies. Glenn Maguire, chief Asia economist for Société Générale based in Hong Kong, is forecasting a further one-off 3.5% revaluation by yearend. Paulson and others want more, but it can't be denied that things are moving in a better direction."

If you look at broader measures of the RMB's value, it can indeed be denied.   There isn't much evidence of a real RMB appreciation.  Not with the dollar back at 1.38.   I don't mean to pick on Bremner either -- the tendency to focus exclusively on the RMB/ dollar is very, very common.