Since Iran began enriching uranium at its declared facilities, it has produced at those facilities: 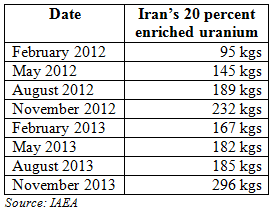 Despite core al-Qaida’s diminished leadership cadre, remaining members will continue to pose a threat to Western interests in South Asia and will attempt to strike the Homeland should an opportunity arise…Al-Qaida in the Arabian Peninsula (AQAP) remains the affiliate most likely to attempt transnational attacks against the United States…

Homegrown Violent Extremists (HVEs) remain the most likely global jihadist threat to the Homeland. While the threat posed by HVEs probably will broaden through at least 2015, the overall level of HVE activity is likely to remain the same: a handful of uncoordinated and unsophisticated plots emanating from a pool of up to a few hundred individuals. Lone actors or insular groups who act autonomously pose the most serious HVE threat.

Terrorism is the modern-day equivalent of the bubonic plague: it is an existential threat.

The review will include a Google search, a simple task that hadn’t been done before. “What pops up when you type somebody’s name into Google?” Welsh said. “It might be worth knowing that before you nominate somebody for a key job. Some of this is common sense.”

As American warplanes dropped bombs on Libya in June 2011, lawmakers accused the Obama administration of usurping Congress and violating the War Powers Resolution. From his office in the Pentagon’s E-Ring, Jeh Johnson, then general counsel at the Defense Department, penned advice to the president: Go to Congress for approval…

But Johnson’s dissent may pay off now: It won him some fans among Republicans in Congress, and they haven’t forgotten.

George Little: One of the reasons that we in the Department of Defense, the U.S. military, have a very high approval rating with the American people is because we are transparent. Even when it’s bad news, quite frankly, we tend to come forward quickly and own up to it and talk about the measures we’re taking to ensure that the problem doesn’t occur again.

The Department of Defense budget for research and procurement of unmanned aerial systems (UAS), or drones, is on a distinctly downward slope.

The FY 2014 budget request included $2.3 billion for research, development, and procurement of unmanned aerial systems, a decrease of $1.1 billion from the request for the fiscal year 2013.

“Annual procurement of UAS has gone from 1,211 in fiscal 2012 to 288 last year to just 54 in the proposed FY14 budget,” according to a recently published congressional hearing volume.

This matters because of the roughly 20,000 drones now in existence, only about 350 are large enough to carry the slate of weapons on the current market.

You Might Have Missed: FAA UAV Roadmap, Salaries of Congress, and Blackwater