A comprehensive agreement on Iran’s nuclear program remained in question days before the November 24 deadline. But nonproliferation experts have continued to explore how any agreement aimed at keeping Iran’s program peaceful could be monitored. In the event a deal is reached, inspections would need to be intrusive, and major powers must sustain political will to see them through, says Christopher Bidwell, senior fellow at the Federation of American Scientists and member of a nonpartisan Nuclear Verification Capabilities Independent Task Force (PDF). Bidwell cites Libya and South Africa as countries that denuclearized under international scrutiny because their governments stressed cooperation and transparency. Iran is more similar to Iraq in the 1990s, a country that engaged in minimum cooperation and active deception, he says. 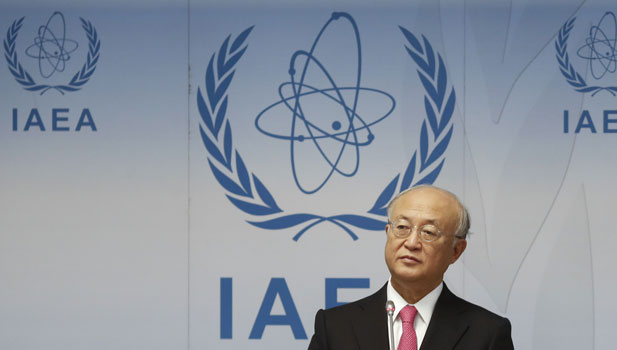 What is the scale of Iran’s nuclear activities that will need to be monitored?

Effective monitoring will require more than just visits to a few sites or putting cameras in known sites. It will entail looking at Iran’s entire declared nuclear fuel-cycle enterprise and inevitably discovering anomalies that will lead to questions requiring follow-on discussions, investigations and/or inspections. Additionally, monitors need to look for possible non-declared activities to ensure that there are no additional Fordows or Natanzes [formerly secret uranium-enrichment plants] waiting to be uncovered.

Finally, monitors will need to look at imports into Iran, specifically, equipment, components, and materials that may have dual-use application and then match that data against what has been declared by Iran.

The Joint Plan of Action focuses largely on Iranian enrichment and nuclear materials. It does not focus on the other steps necessary to achieve nuclear weapons capability. Among these steps are the development of weapons designs, the manufacture, procurement, and testing of nonnuclear components for nuclear weapons, and the development of delivery vehicles. The Annex of the International Atomic Energy Agency (IAEA) report issued in November 2011 outlines some of the elements of Iran’s programs including “work involving neutron initiators, triggering systems, mathematical modeling, and implosion experiments.”

Those charged with doing the monitoring will need to have a holistic understanding of how the Iranian nuclear program works as a system (finance, acquisition, personnel, transportation, contracting arrangements, management reporting chains, location of all facilities, etc.). Not only does this mapping out process require a substantive amount of resources, it can also take a few years to get answers that are minimally satisfactory to those political entities that will ultimately pass judgment on the question of whether or not Iran is in compliance with its obligations under an agreement.

In the event of an agreement, how can the international community ensure Iran’s nuclear program will be exclusively peaceful?

The presumptive guarantor of any likely agreement will be the IAEA. Iran will likely be required to ratify its commitment to the Additional Protocol, which gives IAEA inspectors more robust inspection tools. Some experts, such as Robert Einhorn, former State Department Special Advisor for Nonproliferation and Arms Control, have recommended that Iran agree to an Additional Protocol Plus (AP+). An AP+ agreement would require Iran to permit: (1) managed IAEA access to centrifuge assembly facilities, (2) an accounting of Iran’s uranium mining, (3) establishment of a supervised transaction channel for import of all licit and potential dual-use materials, (4) real-time monitoring in declared facilities, (5) personnel interviews, and (6) a limited number of unannounced challenge inspections of facilities.

All of the above recommendations help, but are meaningless without political will. International cooperation is one of the key reasons the economic exclusion sanctions had an effect on Iran’s economy, which most commentators acknowledge is what brought Iran the negotiating table. A weakening of the international community’s resolve (especially among economically strong European allies) to compel Iran to meet its Nuclear Nonproliferation Treaty (NPT) obligations might tempt Iran to consider cheating.

"Those charged with doing the monitoring will need to have a holistic understanding of how the Iranian nuclear program works as a system."

The requirement for maintaining political will also extends to the IAEA as an organization; it has vacillated between being an accounting agency, verifying what is declared, and a detective agency, looking for what is not declared. If the IAEA becomes the guarantor of an Iranian agreement, its reputation as a viable organization, as well as the de facto insurer of NPT obligations worldwide, is on the line.

Are there lessons from the 1994 Agreed Framework deal with North Korea that could guide monitoring and verification for an Iran deal?

One of the elements of the 1994 Agreed Framework was for North Korea to provide a declaration and to agree to special inspections by the IAEA to verify the accuracy and completeness of the declaration. While some IAEA monitoring inspections did take place, the political will to finish the job of enforcing that requirement dissipated over time. However, the real problem with the Agreed Framework was not in the monitoring and verification, but with the U.S. ability to meet its obligations. A newly elected Republican Congress then, as may likely be the case with Iran now, thwarted the [Clinton] administration’s efforts by putting up roadblocks, such as failing to lift sanctions laws and failing to fund efforts to build a light water reactor in North Korea (an obligation under the agreement). This led to backtracking on North Korea’s part and an effective collapse of the agreement.

How successful have other monitoring regimes been in the past?

There are three examples from the recent past to consider: Iraq, Libya, and South Africa. Libya and South Africa are different from Iran; the political leaders of those nations made affirmative choices to stop and dismantle their programs as a result of cost-benefit analysis. They allowed inspectors and IAEA personnel to have wide access and occasionally ended up proactively informing inspectors when they missed things. Both countries actively sought the proverbial clean bill of health from the IAEA and the West in general. Even then, there was the problem of individuals and institutions that had benefited from their association with the illicit nuclear program and did not want to lose their elevated status, not to mention the monetary rewards. In the end the imperfect, but acceptable, outcomes from the monitoring and investigation process were the result of strong messaging from the top that cooperation and transparency were high priorities. If Iran’s leadership cannot do this, the monitoring and verification efforts will be much less effective.

The situation in Iraq during the early 1990s is more akin to that of current-day Iran. In Iraq’s case, Saddam Hussein reluctantly acquiesced to the monitoring and investigation regime, providing only the bare minimum amount of disclosures and cooperation required and engaging in active deception over several years. This may likely be the case with Iran. Therefore, the IAEA and the P5+1’s (the United States, United Kingdom, Germany, France, Russia, and China) political will have to be sustained if monitoring is to be effective.

You have recommended modeling an inspection protocol on the challenge inspections provided for by the Chemical Weapons Convention (CWC). How would this work?

The main reason our task force referenced the CWC challenge inspection protocol is that Iran has already ratified it. Therefore, any Iranian claims that inspections of this type would unfairly violate their sovereignty rights would seem duplicitous. This is important because the IAEA essentially has challenge inspection authority, but has not aggressively used it. And this may be an appropriate situation for which the IAEA should use such authorities.

The CWC is also a good example of how data declarations form the basis of a monitoring regime. We have recommended as a first step that Iran provide a complete and accurate declaration of all of its nuclear activities. This is essentially how the CWC compliance monitoring process begins. The goal of requiring a comprehensive declaration is not to punish or embarrass the Iranian regime. A comprehensive declaration is necessary to create a baseline against which later discoveries and facts can be measured and to provide the foundation for confidence-building that would be necessary for any agreement to be maintained. The agreement should be as precise as possible in describing the types of information Iran is being asked to provide and the format in which the information should be presented. Such precision has been a successful feature of many prior international arms agreements.

What is the chance that cheating could occur and could be discovered?

No verification regime is air tight. Violations (intentional and unintentional) and anomalies in reporting are going to exist. There are just too many moving parts and geographically dispersed places to monitor. The real question is at what level will the United States and the West no longer tolerate deviations and anomalies. The Consultative Commission recommended in our report will work some of this out but eventually it boils down to Iran’s will to comply versus the P5+1’s will to maintain pressure.

Since we can’t focus entirely on catching violations, one way to ameliorate these concerns is to set up the agreement so that an Iranian act of denying access to a location is an express violation of the agreement. Iranian denial of access would be a less ambiguous act and therefore more provable than that of cheating. Early acts of access denial should be met with strong reversals of sanctions relief. Such a response will ultimately test Iran’s will and be a barometer in assessing whether or not the agreement is likely to hold up.

What can U.S. authorities do to help ensure a successful inspection process?

As spelled out in a January 14, 2014 Task Force study sponsored by the Defense Science Board on Assessment of Nuclear Monitoring and Verification Technologies of the U.S. government, the monitoring and verification infrastructure has atrophied a bit from the heady days of Cold War arms control era. The report suggests a number of steps that can be taken to make monitoring more effective and to mitigate, but not eliminate, the risks. No other state has the range and depth of collection and analytical capabilities of the United States, and it will be imperative that those capabilities be continually replenished, improved, and marshaled in support of monitoring of the Iranian nuclear agreement.

Moreover the United States, like other states, will need to make its own judgments about Iranian compliance with a nuclear agreement. Verification is the process of reaching political judgments about the extent and significance of compliance with international agreements and the determination of how to resolve ambiguities or evidence of noncompliance. Although international bodies like the IAEA can contribute greatly to the verification process, compliance judgments are a national responsibility for which the United States government will need to prepare.

Comprehensive data declarations by Iran, combined with routine and challenge inspections, would go a long way toward deterring and detecting potential noncompliance. But it is clear, however, that a nuclear agreement with Iran cannot be effectively monitored without the United States bringing to bear its resources for monitoring both in support of the international community and to inform the United States’ own judgments about compliance.

Ray Takeyh provides new interpretations of many key events—including the 1953 coup against Prime Minister Mohammad Mossadeq and the rise of Ayatollah Ruhollah Khomeini—significantly revising our understanding of the United States' and Iran’s complex and difficult history.

The United States’ withdrawal from the arms control agreement has heightened tensions and left the remaining signatories scrambling to keep the deal alive.

A global pandemic, elections, civil unrest, and much more. The year 2020 was like no other. Take a look back at how the Council on Foreign Relations brought together renowned experts and leaders to unpack one of the most challenging times for the United States and the world.

Donald J. Trump’s presidency has marked a profound departure from U.S. leadership in areas such as trade and diplomacy, as well as an across-the-board toughening of immigration policies.

The coronavirus pandemic is placing enormous budget pressure on state and local governments, threatening deep and potentially lasting cuts to education, infrastructure, and other important investments.