While the Geneva II talks on Syria that have begun in Switzerland "are positive developments," prospects are slim for "significant breakthroughs on the key issues of political transition," says Edward P. Djerejian, a former U.S. ambassador to Syria. In the coming days, Djerejian says, the parties may focus on limited cease-fires, possible prisoner exchanges, and ways to start alleviating the "tragic humanitarian crisis." If both sides believe they cannot win militarily, the talks could begin paving the way toward a political transition, says Djerejian. 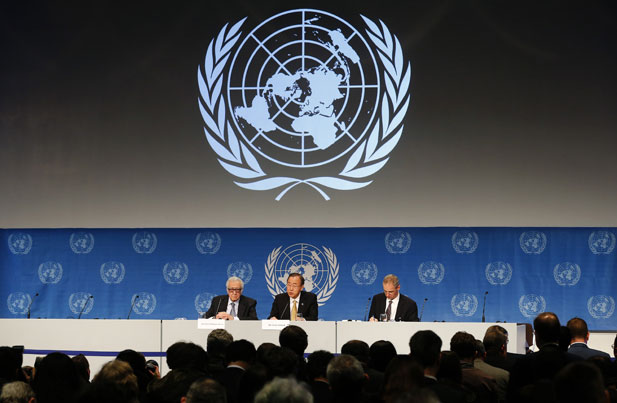 What are the chances for positive developments from the Geneva II talks, which have begun without any signs of goodwill?

The prospects for any significant breakthroughs on the key issues of political transition are remote at this point, given how far apart the Syrian regime and the opposition groups are on the way forward. Nevertheless, the very fact that the conference has convened, that the Syrian government is represented at the foreign minister level at the opening, and that elements of the Syrian opposition—including the Syrian National Coalition—are participating, are positive developments. At least they have agreed to be in the same room together, albeit hurling strong invectives and accusations against one another.

The goalposts of subsequent discussions will have to be relatively modest to have any chance of moving the agenda forward. Namely, the parties will likely focus on limited cease-fires in specific localities within Syria, possible prisoner exchanges, and so-called aid corridors to start alleviating the tragic humanitarian crisis in the country. These could be viewed as confidence-building measures that may—I emphasize, may—lead the parties to start addressing the framework of political transition in the period ahead. Of course, there is also the dire prospect that the talks will break down, given that so much blood has been spilled and that revenge rather than reconciliation seems to be the prevailing sentiment among the parties to the conflict.

Could these talks resemble the Vietnamese peace talks that began in 1968 but only ended in 1973—that is, over a very protracted period—because of the parties’ mutual distrust?

"It is only when the calculus sets in that military victory is not possible that real compromise solutions can be pursued."

That is an interesting historic analogy, and there is the real possibility that the Syrian conflict can be protracted as long as the opposing sides still believe that they can "win" through military means and resistance. It is only when the calculus sets in that military victory is not possible that real compromise solutions can be pursued.

The Syrian crisis at the very heart of the Arab world could, if prolonged, be a source of major regional disruption threatening the sovereignty and territorial integrity of all of Syria’s neighbors—Turkey, Lebanon, Iraq, Jordan, and Israel. Accordingly, the regional countries involved and the international community that all have a stake in peace and security should be mobilized to actively stem the crisis, bring the fighting to an end, and foster a political way forward. The stakes are simply too high for this crisis to become a major source of instability in the troubled Middle East.

Is there any compromise that might appeal to all sides? The Assad government seems adamant that Bashar will not step down. The opposition is fragmented but united in demanding that the Assad regime be replaced. How would a "transition" government be set up? That is, after all, one of the conditions for Geneva II.

As I said, first it will be important for both sides to conclude that neither one can prevail militarily for real comprise solutions to be explored. In the best of all worlds, and if there is limited progress along the lines I indicated at these talks, the very process of negotiations under the Geneva formula can allow the parties to begin to discuss tradeoffs and approaches for a framework of political transition that will involve hard compromises.

For example, Bashar al-Assad has consistently indicated that presidential elections scheduled for June 2014 should be adhered to. Of course, he can be expected to rig those elections if he could. But if the Geneva formula moves forward and there is a process of constitutional and electoral reforms under strict international monitoring, that could provide the political space for the opposition and regime representatives to contest the power structure in Syria at the ballot box.

Did the United States make a mistake in not using military force over Assad’s use of chemical weapons? Should it have been more decisive in its policy? Was it wrong in not permitting Iran to take part in the opening of the peace talks as desired by the UN and the Russians?

The United States missed an opportunity two years ago to become more actively involved in supporting the Syrian non-radical opposition groups with stronger political and military support to try to level the playing field and allow the opposition to more effectively oppose the Assad regime’s preponderance of military power, especially its air, missile, and heavy armor capabilities. We may have been in a more effective position today to influence events on the ground and at Geneva. Having said that, President Obama is right to avoid at all costs any U.S. military ground troops in Syria. On the chemical weapons issue, and despite the muddled way we got there, the end result is positive and quite an achievement that Syria is dismantling its significant chemical and biological weapons arsenal.

You’ve known President Bashar Assad. Were you surprised at how ruthless his policy has turned out in the face of the long civil war? Or is it in a way emblematic of his support for his family and his heritage?

I met President Bashar al-Assad three times, and there was much hope when he came to power in 2000 that he would be a reformer because of his youth, [his] Western education along with that of his wife, and his early public statements. In one meeting, years before the Arab Spring, I asked him why reforms were not proceeding at a meaningful pace in Syria. His response was that the people have to be prepared for structural reforms and, therefore, he was embarking on "administrative reforms" to prepare the way.

This position turned out to be a subterfuge. When the Arab Spring came to Syria in 2011, it became painfully evident that his words never matched his deeds. Many observers thought he would get out ahead of the young Syrian peoples’ call for reforms, akin to what King Mohammed VI of Morocco did. Instead, he listened to the ruling clan and confronted peaceful protestors with the armed might of the Syrian military and security apparatus, and, in a self-fulfilling prophecy, lit the fire of a civil and sectarian war in Syria. The rest is tragic history.