Skip to main content
A Stable Transition in Taiwan?

Taiwan elected Tsai Ing-wen, the island’s first woman president, in a landslide victory with 56 percent of the vote in elections on January 16. Her party, the Democratic Progressive Party (DPP), also won sixty-eight seats in the Taiwanese legislature, securing its first-ever majority and unseating the long-governing Kuomintang (KMT) party. The DPP has signaled a tougher stance vis-à-vis cross-strait relations, pushing for greater de jure independence from mainland China. The new administration’s challenge will be determining whether to improve ties with mainland China, says CFR’s Jerome A. Cohen in a written interview. “If Ms. Tsai fails in her effort to maintain predictable, stable, and beneficial cross-strait relations, this will have an undesirable impact on regional security affecting all the neighboring states,” writes Cohen. 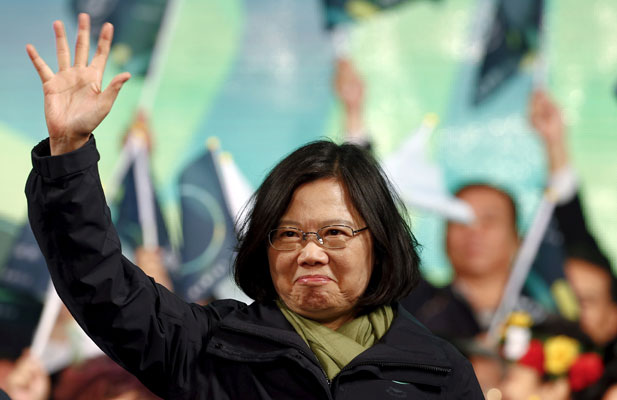 How much change might we expect given the coming presidential and legislative power shifts in Taiwan? How will regional stability be affected?

More From Our Experts
David Sacks
What the Biden-Xi Meeting Means for U.S.-China Relations
Christopher M. Tuttle
What the Midterm Elections Mean for U.S. Foreign Policy

The DPP’s forthcoming control of both the executive and legislature for the first time will surely affect Taiwan’s domestic politics, stimulating not only economic reforms but also domestic political/constitutional change. One should expect, for example, improvements in the judicial system that will require constitutional amendments.  As for relations with Beijing, if Ms. Tsai fails in her effort to maintain predictable, stable, and beneficial cross-strait relations, this will have an undesirable impact on regional security affecting all the neighboring states as well as Japan, South Korea, and the United States. In any event, we should expect to see Taiwan reach out to its neighbors on the periphery of the People’s Republic of China (PRC) to a larger extent than heretofore in the hope of mustering greater political collaboration as well as economic cooperation. However, its principal reliance will continue to be on the United States and Japan.

Chinese President Xi Jinping and outgoing Taiwanese President Ma Ying-jeou held a historic meeting in November, but what is the overall state of cross-strait relations?

Trade, investment, transportation, judicial assistance, academic cooperation, tourism, and athletic exchanges continue across the strait in accordance with the more than twenty deals reached during Taiwanese President Ma Ying-jeou’s first six years as president. However, cross-strait ties have witnessed little progress since the student-inspired 2014 Sunflower Movement interrupted the legislative review of the agreement on trade in services that Ma’s administration had concluded with mainland Chinese representatives. Although negotiations over a trade agreement for goods have continued, the parties have not come close to finalizing the document.

“The DPP will remain very cautious about further steps to integrate Taiwan and the mainland, but Ms. Tsai has pledged to maintain the current path of cooperation rather than undo it.”

The challenge for the new administration of President-elect Tsai Ing-wen will be whether and how to forge further progress in Taiwan’s relations with the mainland. Progress will be difficult so long as Tsai refuses to accept the so-called “1992 Consensus” that maintains that Taiwan and the mainland constitute a single China, albeit with differing understandings of what this means for the two sides. Acceptance of this formula is commonly understood to exclude the possibility of the island’s formal independence, a position that Ms. Tsai’s party, has steadfastly rejected, while the KMT openly adheres to the “one China” principle, implicitly negating the possibility of Taiwan’s secession.

How do disputes in the South China Sea and China’s bolder ambitions in the region factor into the China-Taiwan relationship?

China’s assertive conduct in the South China Sea (SCS) puts immediate strain on the Tsai administration, which will take office on May 20. Until very recently, the Taiwan government adopted a position on international law issues related to the SCS that was virtually identical to that of the PRC. Indeed, Beijing’s controversial support for a “Nine-Dash Line” that would give it some as yet imprecise types of exclusive jurisdiction over the SCS traces its origin to a 1947 claim made in by the Republic of China (ROC), China’s governing body from 1912 until the KMT’s defeat by the Communists in the Chinese civil war and the establishment of the PRC on the mainland in 1949. [Editor’s note: the KMT abandoned the mainland for Taiwan in 1949 and retained the name Republic of China.]

More From Our Experts
David Sacks
What the Biden-Xi Meeting Means for U.S.-China Relations
Christopher M. Tuttle
What the Midterm Elections Mean for U.S. Foreign Policy

The ROC’s statement about the SCS in October 2015, however, remained silent about the most controversial issues relating to the PRC claims. Nothing was said about the PRC’s creation of artificial islands from mere reefs on which it has been constructing airstrips capable of military uses. Nor did the ROC renew its support for the Nine-Dash Line. Moreover, the ROC appears to have somewhat softened its opposition to the SCS arbitration initiated by the Philippines against China under the UN Convention on the Law of the Sea (UNCLOS). The PRC has spurned this arbitration, while the ROC has been excluded because it is no longer recognized as the representative of China in UN bodies. [Editor’s note: the PRC replaced the ROC as the representative for “China” at the UN in 1971.]

The ROC would like to be seen as a strong supporter of UNCLOS (and other multilateral treaties) to demonstrate its respect for international law despite its formal exclusion from the diplomatic system. Under political pressure—from the United States, Japan, and some of its Southeast Asian neighbors—to resist the PRC’s maximum maritime claims, the ROC has been searching for a middle course. It does not want to abandon the advantages deriving from the claims to which “China” may be entitled. Yet it does not want to be condemned, as the PRC has been, for disrespecting UNCLOS by making claims that seem to most nations to violate the convention.

How do the DPP and the KMT (Taiwan’s main political parties) differ in their approaches to managing the cross-strait relationship?

The KMT, adhering to its professed belief that it represents the future of China as well as Taiwan, made great historic strides in enhancing cooperation with Beijing during Ma’s two terms. It neglected, however, to maintain sufficient transparency about its plans, negotiations, and accomplishments, and to subject its actions to adequate public review and supervision, undoubtedly believing that to do otherwise would have prevented the conclusion and implementation of many of the agreements made with the PRC. This failure finally caught up with the KMT when the Sunflower Movement protested against the recently concluded trade in services agreement and physically interfered with the legislature’s approval process.

Whether the DPP will abandon its generally unenthusiastic posture about further developing cooperation with the mainland remains to be seen. In the early days of its previous control of the ROC’s executive, Chen Shui-bian’s presidency (2000–2008), the DPP did show some willingness to initiate cooperation with Beijing in an understandably cautious fashion. The DPP will remain very cautious about further steps to integrate Taiwan and the mainland, but Ms. Tsai has pledged to maintain the current path of cooperation rather than undo it.

What is the nature of the U.S.-Taiwan relationship?  What are Washington’s interests in maintaining de facto ties with Taipei?

Washington wants to see the continuing development of Taiwan’s democratic society, rule of law, and political and civil rights, the most impressive achievement yet of any Chinese political-legal culture, including Singapore’s semi-democratic system.

In accordance with its Taiwan Relations Act, the United States is committed generally to the defense of Taiwan despite the absence of formal diplomatic relations. Washington wants to make sure that no crisis emerges in the Taiwan Strait that tests the strength and scope of this imprecise defense commitment.

“Washington wants to make sure that no crisis emerges in the Taiwan Strait that tests the strength and scope of its imprecise defense commitment.”

Taiwan, of course, has considerable military strategic value as the so-called “unsinkable aircraft carrier” between Northeast and Southeast Asia and immediately adjacent to China, Asia’s most powerful country. Despite the island’s strategic value, I believe the United States would acquiesce in Taiwan’s unification with China if, but only if, that proved to be the wish of the substantial majority of the island’s people expressed in a free referendum. Such an eventuality seems very unlikely. Nevertheless, especially in view of the American people’s understandable fatigue from overseas conflicts, one cannot take for granted that Washington will honor its defense commitment to Taiwan, especially if a Taiwan government is perceived to have unjustifiably provoked Beijing’s wrath. Hence the importance of continuing close interaction between Washington and both Taipei and Beijing.

What kind of role can the United States play to mitigate potential China-Taiwan tensions?

It is easier to call for the United States to mitigate cross-strait tensions than it is to prescribe how this should be done. Yet by now the United States has a vast body of both positive and negative experience to draw on. It is imperative for Washington and Beijing to expand formal and informal military, strategic, political, economic, and cultural exchanges, and Washington and Taipei should do the same on “unofficial” bases. Moreover, think tanks and academic institutions in all three jurisdictions should have more trilateral as well as bilateral exchanges on a broad range of subjects designed to better mutual understanding and to anticipate emerging problems. The United States should strive to persuade the PRC to acquiesce in visits to the United States by the highest ROC officials, who are currently banned not only from Washington but also everywhere else except on delicately arranged and very restricted occasions while en route to other countries. Some trilateral joint research and conference centers should be established in all three jurisdictions.