The gravest health threats facing low- and middle-income countries are not the plagues, parasites, and blights that dominate the news cycle and international relief efforts. They are the everyday diseases the international community understands and could address, but fails to take action against.ca

Once thought to be challenges for affluent countries alone, cardiovascular diseases, cancer, diabetes, and other noncommunicable diseases (NCDs) have emerged as the leading cause of death and disability in developing countries. In 2013, these diseases killed eight million people before their sixtieth birthdays in these countries. The chronic nature of NCDs means patients are sick and suffer longer and require more medical care. The resulting economic costs are high and escalating. Unless urgent action is taken, this emerging crisis will worsen in low- and middle-income countries and become harder to address.

Cancer, diabetes, stroke, and other NCDs long ago became challenges for developed countries, but the epidemiological transition happening now in developing countries differs in speed, scale, and consequence. Rates of NCDs are rising fast in low- and middle-income countries. 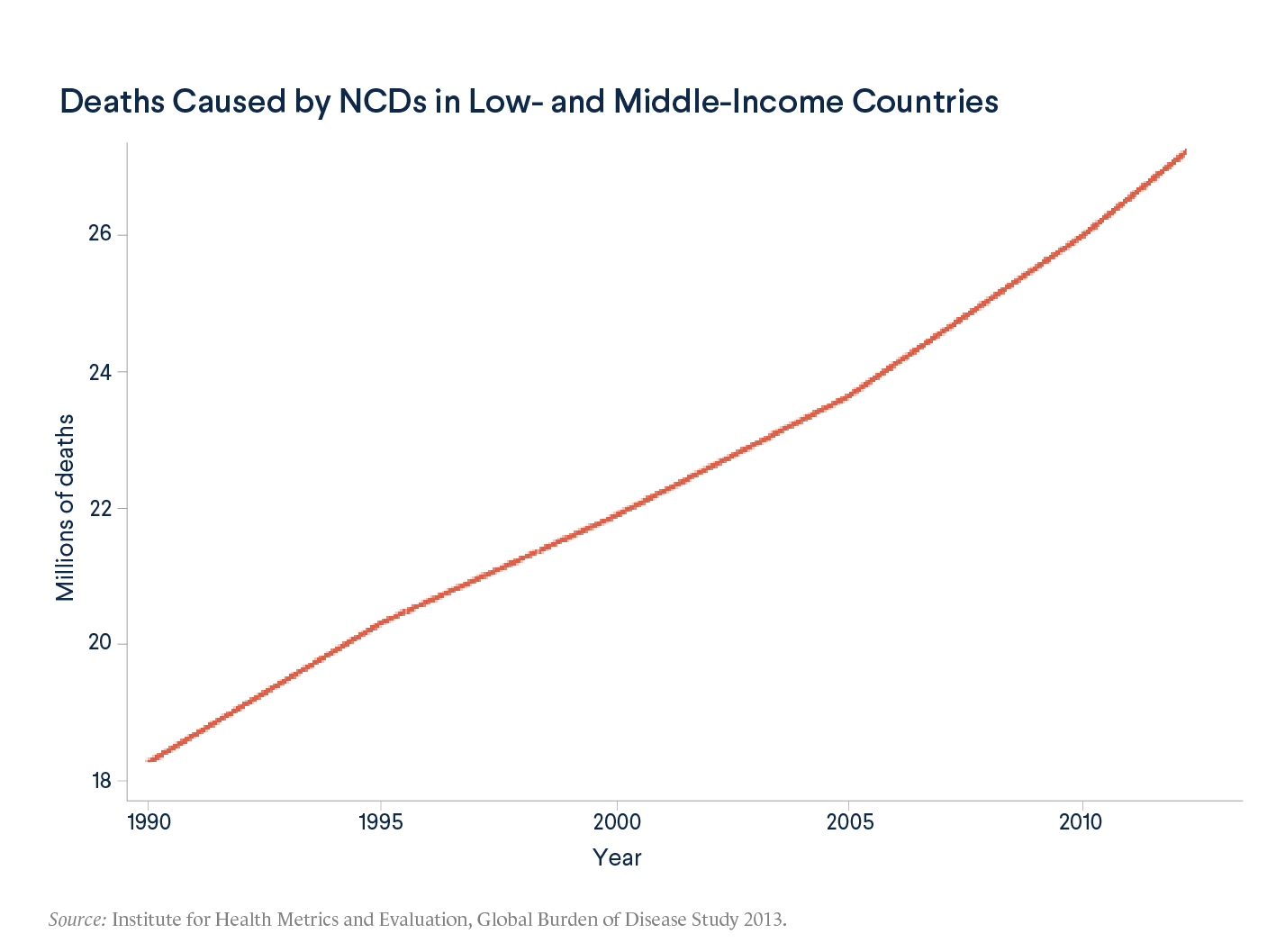 NCDs are also arising in younger populations in developing countries. Most of the death and disability from NCDs in these nations occurs in working-age people, under the age of sixty. In low-income countries, particularly in Africa, that proportion rises to 80 percent or more. 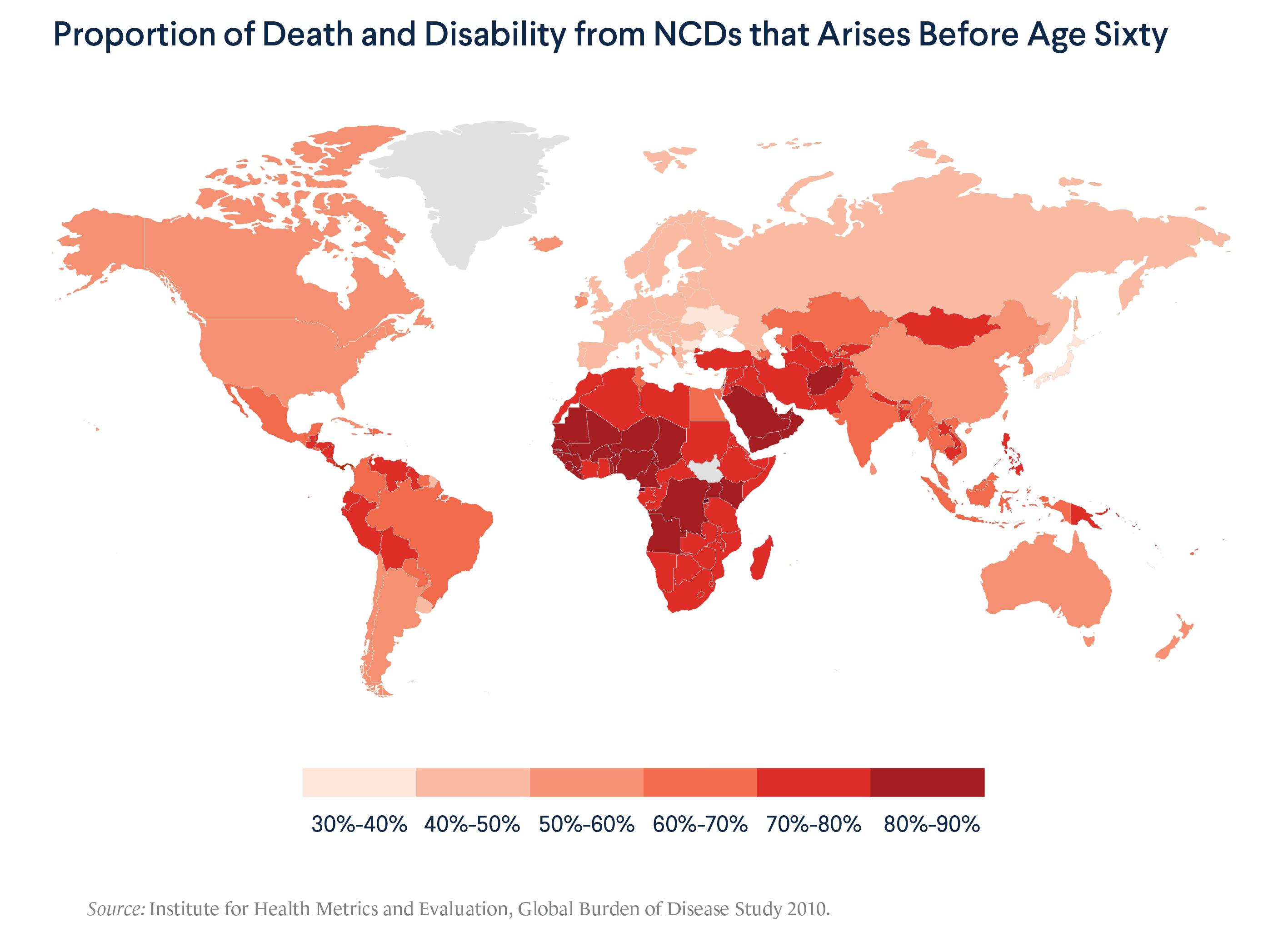 NCDs are also yielding worse outcomes in low- and middle-income countries. NCDs that are preventable or treatable in developed countries are often death sentences in developing countries. Cervical cancer can largely be prevented in developed countries, but it is the leading cause of death from cancer in women in sub-Saharan Africa and South Asia. Ninety percent of children with leukemia in high-income countries can be cured, but 90 percent of those with that disease in the world’s twenty-five poorest countries die from it. Nine out of ten chronic obstructive respiratory deaths worldwide occur in developing countries. 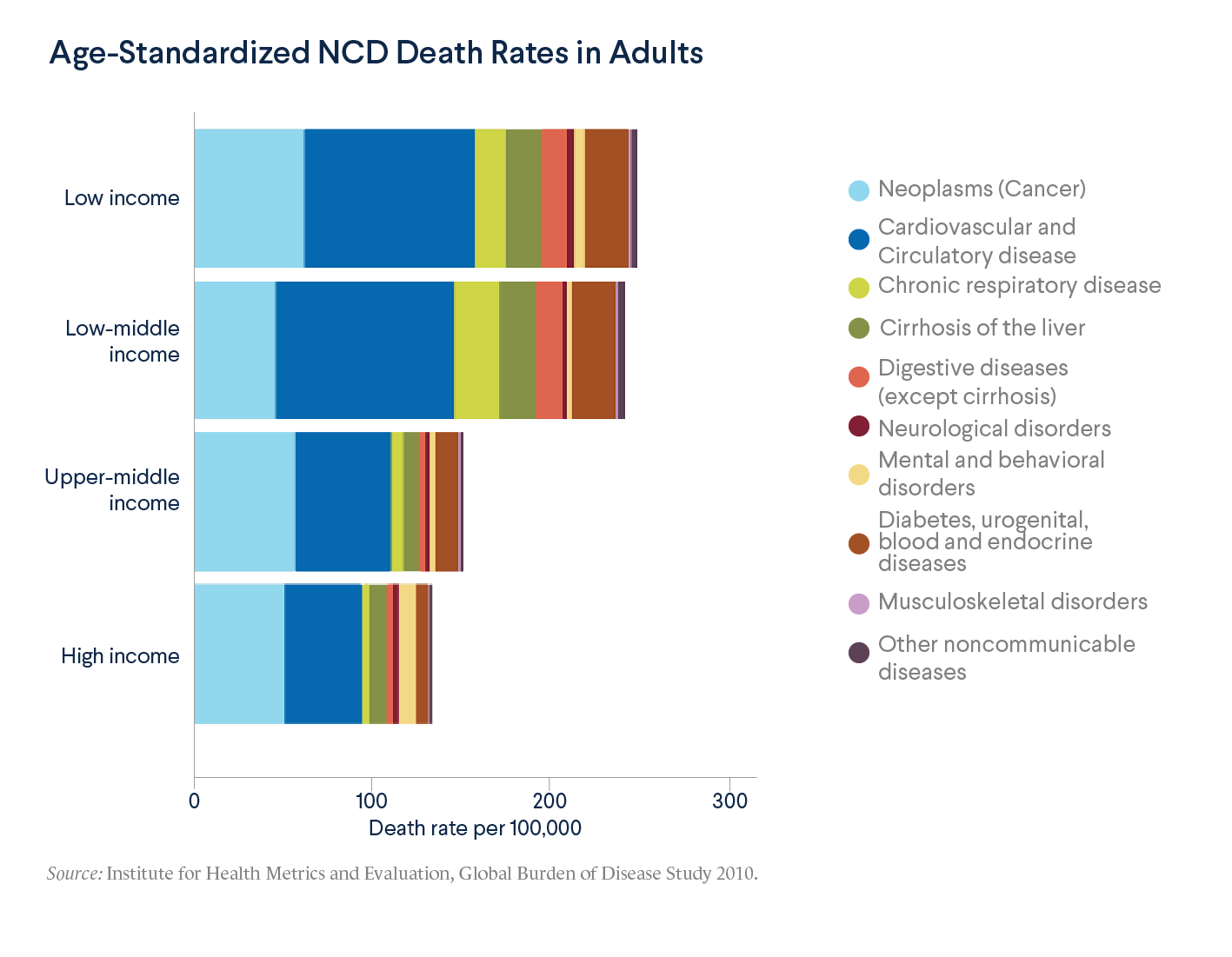 Drivers of an Epidemic

The rise of NCDs in low- and middle-income countries is not merely a byproduct of success. Recent declines in infectious disease in developing countries help explain why more people who would have once succumbed in childhood or adolescence to plagues and parasites now get NCDs later in life instead. Declining infectious disease rates do not, however, explain why so many people in these countries are developing NCDs so much younger and with such worse outcomes than in wealthier nations. Rates of obesity, consumption of fatty foods, and physical inactivity in these countries have grown, but remain much lower than in high-income countries. Premature death and disability from NCDs is increasingly associated with poverty in emerging nations, just as it is in wealthy countries. The factors fueling the soaring rates of NCDs are dramatic changes in urbanization, global consumer markets, and longevity that occurred in wealthy nations over decades, but are happening simultaneously and much faster in still-poor countries.

Urbanization, trade, and the global integration of consumer markets have done much good in developing countries: improved sanitation; lifted millions from poverty; and increased food production. But these trends have also transformed the health risks that low- and middle-income countries face. Inhabitants of densely packed urban areas often face pollution outdoors and the burning of fuels indoors, are more likely to buy tobacco products, and less likely to have access to adequate nutrition. Between 1970 and 2000, cigarette consumption tripled in developing countries. Super- and mega-markets have penetrated every region of the world, even rural areas. Many vegetables and fruits are disappearing from diets globally. Nearly a quarter of premature deaths in developing countries are now attributed to high blood pressure, smoking, and diet.

With little access to preventative care and more exposure to behavioral health risks, working-age people in developing countries are more likely to develop an NCD. Without access to chronic care and limited household resources to pay for medical treatment, these people are more likely to become disabled and die young as a result.

Chronic Diseases and their Costs

The increase in rates of premature NCDs in low- and middle-income countries mean more patients are getting sick, suffering longer, requiring medical care, and dying younger. Given the scale at which this is happening, those effects reverberate.

At the household level, NCDs consume budgets through out-of-pocket health-care costs and foregone income for patients and caregivers. To cover these costs, households take unsecured loans, deplete savings, or sell assets, all of which put families on precarious financial footing. The rates of catastrophic health expenditures in India for households with a male family member suffering from cancer or heart disease are 44 percent and 24 percent, respectively.

At the national level, NCDs lower productivity and competitiveness in developing countries and increase health and welfare expenditures. High rates of premature death and disability from NCDs undermine the economic benefits that would otherwise accrue to these countries from having more working-age people in the labor force as a result of reductions in child mortality and better family planning. 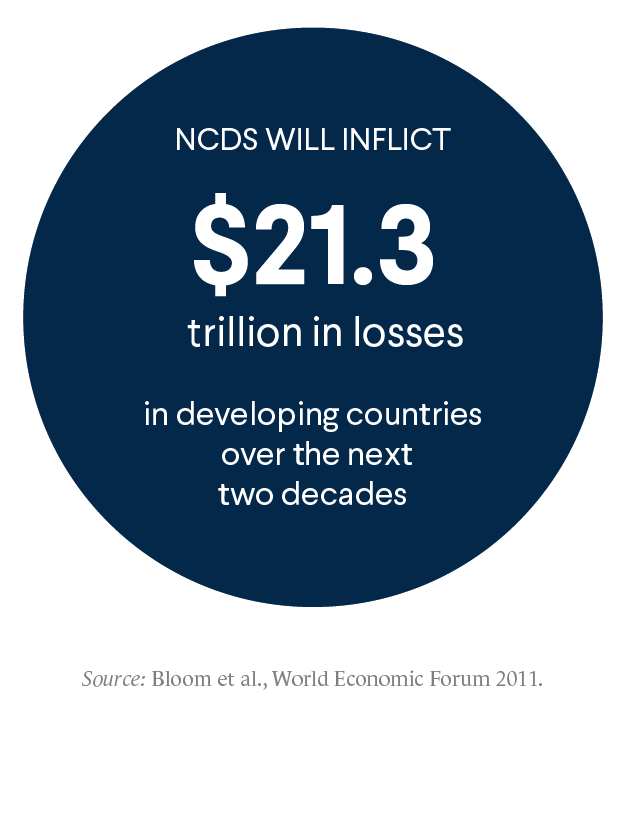 At the global level, the World Economic Forum (WEF) projects that NCDs will inflict $21.3 trillion in losses in developing countries over the next two decades—a cost nearly equal to the aggregate economic output of these countries in 2013. For these reasons, the WEF has ranked NCDs as a greater threat to global economic development than fiscal crises, infectious diseases, natural disasters, and crime and corruption.

The Response to Date

The last time that the world confronted a health challenge that caused a large number of premature adult deaths disproportionately in developing countries was HIV/AIDS. The United States led the global response to that disease and the world rallied to its side. The international response to HIV/AIDS expanded treatment to millions, saved many lives, and inspired a dramatic increase in global support for addressing other public health challenges from malaria to family planning to maternal and child health.  It is an accomplishment of which the United States and its international partners may feel deeply proud.

Cardiovascular diseases, cancer, diabetes, and other NCDs are rising fastest in the same populations and countries in which the United States and the international community have invested to address HIV/AIDS and these other global health needs. The interactive map below depicts global changes in the disability and death (as measured in disability-adjusted life years or DALYs) between 1990 and 2010 from communicable diseases, which include all infectious diseases such as HIV/AIDS, malaria, and tropical viruses, and various NCDs.

Consider the forty-nine countries in which the United States devoted five million dollars or more in aid for health in 2013 (designated on the map as “U.S. priority countries"). NCDs accounted for 28 percent of the premature (under-age-sixty) deaths in these countries. That rate was 3.5 times greater than premature deaths from HIV/AIDS in these U.S. priority countries and 1.6 times as many premature deaths as malaria, tuberculosis (TB), and HIV/AIDS combined. The patients affected by NCDs and the communicable diseases targeted by global health programs are often the same. The average ages of death from HIV/AIDS and TB globally are 38.6 and 52.9, respectively. These are also the age groups suffering the worst effects of NCDs in developing countries.

U.S. and international global health initiatives have not yet adjusted to these changing health needs. The United States has no dedicated programs or budget to address NCDs in developing countries. Despite the efforts by the World Health Organization, the United Nations, and NGOs to raise the priority of these diseases, international donor aid and a well-prioritized agenda for collective action on NCDs likewise remain elusive.

The urgency of this situation led the Council on Foreign Relations to convene an Independent Task Force on Noncommunicable Diseases—its first ever devoted to a global health matter. The charge of the Task Force was to assess the case for greater U.S. engagement on the NCD crisis in developing countries and to recommend a practical and scalable strategy for intervention. 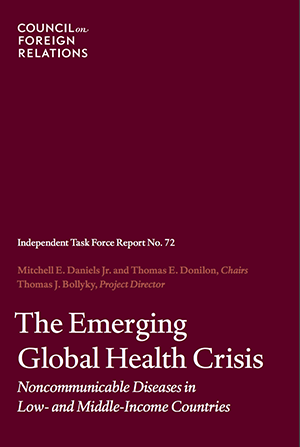 The principal U.S. interest in addressing HIV/AIDS, malaria, under-nutrition, and poor maternal health lies not in the direct threat that these diseases and conditions pose to Americans, which is modest, but rather in improving the fortunes of the developing countries and people that suffer unnecessarily from them. The same interests exist with NCDs. As the scale and consequence of this NCD epidemic grows rapidly in developing countries, so does the threat to U.S. interests.

The United States cannot solve the NCD crisis emerging for developing countries. Ultimately, that responsibility lies with the national and local governments of those countries. Yet, working with likeminded partners, the United States can help slow the rise of this epidemic, lessen its worst effects, and provide national governments with the time and technical assistance needed to tackle this emerging crisis sustainably on their own.

There is much the United States can do to help enable developing countries to meet the NCD challenge at relatively modest cost. The Task Force advocates that U.S. efforts focus on the specific NCDs and risk factors that are especially prevalent among working-age poor in developing countries and for which there are low-cost interventions that can leverage existing U.S. global health platforms.

Based on that strategy, the Task Force has made a series of specific recommendations for U.S. action on NCDs and provided an investment case for each. Those recommendations fall in three categories:

An NCD crisis in developing countries is not inevitable. Despite much higher rates of obesity and physical inactivity, premature death and disability from NCDs has declined dramatically in the United States and other high-income countries. The difference? Mostly cheap and effective prevention policies and off-patent tools that are not widely in place in developing countries, but could be with well-established global health strategies.

The interactive below shows the deaths that would be averted in just the forty-nine countries where the United States currently has significant global health investments if those countries achieved the same rates of premature mortality as the average high-income country between 2000 and 2013. If those outcomes could be achieved or even approached, the results would be comparable to other successful U.S.-supported initiatives on childhood immunization and HIV.

The Task Force is under no illusion that the recommendations and strategies outlined in its report would be alone sufficient to stem the tide of NCDs in developing countries. Building health systems, allocating scarce resources, and enforcing public health laws and consumer protections are decisions for national governments alone. Yet, the priorities of the United States and global health actors deeply influence those decisions. The recommendations and strategies outlined in this report would save lives, demonstrate the feasibility of progress on NCDs, and catalyze broader action. The time to act is now.

Final Report of the Independent Task Force on Noncommunicable Diseases

Diseases Be Prevented? Lessons From Studies of Populations and Individuals,” Majid Ezzati and Elio Riboli, “Can Noncommunicable Science, September 2012.

“Where are you most likely to die of a Noncommunicable Disease?,” The Economist, June 2012.

Annex (PDF) with research methodology and profiles of nearly fifty priority countries. Individual profiles also available above in the Country Case Studies section of this interactive.