Malaria, a mosquito-borne illness, is one of the world’s deadliest infectious diseases. More than two hundred million people contract the disease each year, and more than four hundred thousand die from it. Once transmitted in nearly every country on earth, today the vast majority of infections occur in sub-Saharan Africa. Nearly 70 percent of malaria deaths are in children under five.

The number of people who die from malaria each year has fallen by more than half since 2000, and many scientists, policymakers, and philanthropists say eradication is in sight. The Bill & Melinda Gates Foundation has committed nearly $2 billion to antimalaria efforts, and Bill Gates has said he believes the disease can be wiped out by 2040. In 2015, the United Nations and Gates Foundation issued a road map to eradicating the disease that calls on world leaders to increase funding to public-health efforts.

Despite these ambitious targets, weak health systems and drug and insecticide resistance hobble efforts to diagnose, treat, and control the disease. Climate change and increased migration have further complicated efforts to combat mosquito-borne illnesses. But some experts say the most significant challenge will be maintaining funding and political will to eradicate the disease.

Malaria is caused by Plasmodium parasites. P. falciparum, the most common form of malarial parasite in sub-Saharan Africa, is responsible for the most deaths worldwide; P. vivax is the most common malarial parasite outside of sub-Saharan Africa. References to the disease date back to the fifth century BCE in Greece, although scientists only discovered that the disease is transmitted by mosquitoes in the late nineteenth century.

Plasmodium parasites are transmitted to humans through female Anopheles mosquitoes. The parasites travel through the infected person’s blood to the liver, where they grow, multiply, and then spread throughout the body’s red blood cells, destroying them in the process. Individuals with weaker immune systems, particularly children under five, are the most vulnerable. Pregnant women are also at high risk for becoming sick and passing the disease to the fetus (the parasites take hold in the nonimmune placenta), and malaria contracted during pregnancy is thought to contribute to low birth weights that result in a hundred thousand infant deaths each year.

Symptoms range widely, often depending on the individual’s previous exposure to the parasite. (Most people develop some immunity to the parasite with repeated exposure.) Most people experience just mild symptoms, which can include chills, fever, or headache. Severe infections can cause organ failure, seizures, coma, or death. Symptoms last between a few hours and several months, and the P. vivax parasite can remain dormant in the host’s liver for years, causing relapses.

Where is malaria found?

Malaria today is transmitted in ninety-five countries, accounting for nearly half of the world’s population. Eighty-nine percent of all reported cases are in sub-Saharan Africa, and most other cases are found in South and Southeast Asia. Like many other mosquito-borne diseases, malaria is most often found in warm, moist climates, in areas near standing water, where mosquitoes breed.

The disease is often a correlated with poor infrastructure and weak health systems. For example, Venezuela, which had eliminated malaria in its urban areas in 1961, has seen a recent resurgence of the disease due to illegal mining (miners search for gold in watery pits, where mosquitoes breed), an industry that has grown amid the country’s economic downturn. Shortages of fumigation supplies and antimalarial medications have allowed the disease to spread elsewhere in the country.

How did the United States eliminate the disease?

Malaria was transmitted in the United States and much of Europe until the middle of the twentieth century, when governments launched national campaigns to eliminate the disease. Eliminating mosquito-borne diseases from a given area often hinges on improving infrastructure, including removing or draining breeding sites, such as marshes; improving housing, by installing screens on windows and doors; and paving roads, in addition to spraying  potential breeding sites and homes with insecticide.

U.S. health officials reported more than sixty thousand cases [PDF], mostly in the South, in 1945. The U.S. National Malaria Eradication Program (NMEP) was launched in 1947, and by 1951, health officials said the disease was no longer a public-health problem. Between 1,500 and 2,000 cases of malaria are still reported in the United States each year, mostly in travelers who have recently returned from malaria-endemic areas, according to the U.S. Centers for Disease Control and Prevention. These cases are usually isolated, and officials say they do not constitute a threat to public health.

In 1955, the World Health Organization (WHO) launched the Global Malaria Eradication Program (GMEP). The program centered on distributing  the drug chloroquine for malaria prevention and treatment and spraying insecticides—namely, dichlorodiphenyltrichloroethane (DDT)—to reduce mosquito populations. Reported cases fell worldwide, but by the early 1960s, strains of insecticide-resistant parasites emerged, along with growing concerns about the environmental and public-health risks of DDT. Research efforts, as well as political and financial support for GMEP, waned, and WHO suspended the program in 1969.

Malaria had largely been eliminated from the United States, Europe, and parts of Latin America and Asia by then. In sub-Saharan Africa and Southeast Asia, however, the disease resurged as drug- and insecticide-resistant strains of the parasite spread and funding for treatment and research dried up. Globally, malaria deaths nearly doubled between 1980 and 2004.

How is malaria treated?

The most effective for treatments against the P. falciparum parasites are Artemisinin-based combination therapies (ACTs), which are administered in multiple doses. ACTs are 96 percent effective in killing off P. falciparum parasites in the bloodstreams of children under five. The first line of treatment for P. vivax is chloroquine, and the drug primaquine is administered in areas with chloroquine resistance.

Plasmodium parasites are highly adaptable, which means strains of malaria that are resistant to treatment and prevention are a constant risk. Artemisinin-resistant strains of malaria have been found in at least five countries in Southeast Asia, and researchers worry about resistance emerging in sub-Saharan Africa. Artemisinin-based combination therapies help to guard against drug resistance since it is more difficult for a parasite to develop resistance to multiple drugs simultaneously. Researchers are working to develop single-dose treatments. Governments are also cracking down on counterfeit drugs, including ineffective antimalarial treatment, which can increase population resistance to treatment.

Is there a vaccine?

Researchers have developed a vaccine that has been partially effective in preventing the disease. RTS,S, which was developed by GlaxoSmithKline and the Walter Reed Army Institute of Research, is undergoing trials. It is the first antimalaria vaccine to complete phase III trials, meaning it has been tested on large groups of people. Early research found that four doses of the drug reduced cases in children by between 27 and 39 percent. Another vaccine, PfSPZ, which is in an earlier stage of trials, was found to offer complete protection to 55 percent of research volunteers for one year. Several medications prevent infections while they are being taken but do not offer longer-lasting protection.

How is malaria transmission reduced?

Malaria control in endemic countries generally centers on the following:

Can malaria be eradicated?

Bill Gates, a leading funder of antimalaria efforts, has said that the cost of controlling malaria "endlessly" is not financially sustainable, calling for eradication instead. Malaria infections fell by more than one-third and deaths fell by 60 percent between 2000 and 2015, according to WHO, which aims to reduce malaria incidence and deaths 90 percent from 2015 levels by 2030 [PDF].

Despite this progress, complete eradication will prove challenging. "The next decade will be really telling to see if we can use existing—and new—tools to see significant transmission reductions," says Kammerle Schneider, policy and planning lead for PATH’s Malaria Control and Elimination Partnership in Africa. Schneider says that shorter-course and faster-acting drugs, new vaccines, and improved diagnostics will help bring down malaria incidence worldwide. "Of all diseases that are potentially eradicable, this is a strong candidate," she says.

However, many experts say targeted elimination, ridding specific areas of the disease, is more feasible than eradication, which refers to permanently ridding the world of the illness. "The only way we could ever eradicate [malaria] is if we had a 100 percent safe vaccine with no side effects and a 100 percent uptake by human beings. Not likely," says CFR Senior Fellow for Global Health Laurie Garrett. "Elimination—targeting a specific geography—is more realistic." 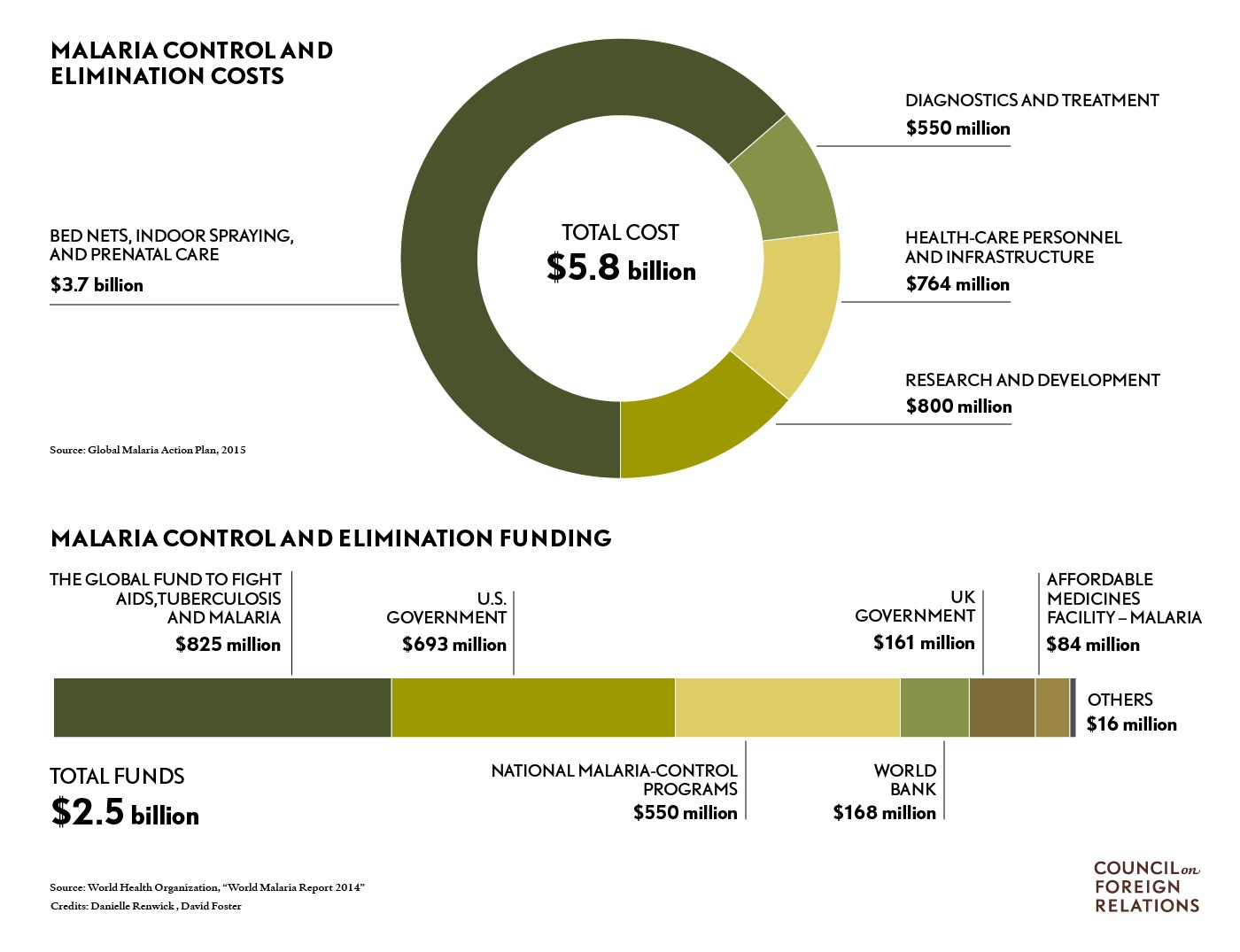 The UN committed to "halt and reverse" malaria’s spread as part of the Millennium Development Goals, released in 2000, and global funding for malaria control and elimination grew [PDF] from $130 million in 2000 to $2.7 billion in 2015. In 2005 U.S. President George W. Bush launched the President’s Malaria Initiative (PMI), increasing U.S. funding for malaria prevention and treatment by more than $1.2 billion over five years. President Barack Obama continued the initiative, investing nearly $5.8 billion in the PMI between 2009 and 2016.

Eradicating malaria by 2040 would cost between $90 billion and $120 billion, according to the Gates Foundation. The WHO says annual funding will need to reach [PDF] $6.4 billion per year, more than twice current levels, by 2020 to reduce global malaria incidence and mortality by 40 percent. Current funding levels fall short of the estimated costs of controlling and eliminating the disease, although some experts say costs are difficult to calculate and may be inflated (see graphic).

Advocates say eradication could save eleven million lives and yield roughly $2 trillion in gained productivity and savings for health systems by 2040. According to WHO, reductions in the number of people seeking public-sector treatment in sub-Saharan Africa for malaria between 2001 and 2014 saved $900 million [PDF] in health expenditures. (The organization estimates that treatment for malaria in sub-Saharan Africa costs nearly $300 million each year.)

Sonia Shah, author of The Fever, a book about malaria, says eradication is possible, but that the 2040 deadline is ambitious. "The way financing works for global health is you have to use goal posts to get people fired up to spend money and keep going," she says. "It’s political, not a science-based prediction."

Despite recent progress, researchers must continuously outpace drug and insecticide resistance. Rising global temperatures expand mosquitoes’ ranges, which can expose new populations to the disease, and greater migration can increase transmission rates. Poor infrastructure often leaves spaces for mosquitoes to breed, and international funding "does not address fundamental weaknesses in health systems," according to WHO.

Antimalaria efforts have made enormous strides in the last decade. However, health experts warn against complacency, pointing to the disease’s resurgence after eradication efforts waned in the late 1960s. According to Roll Back Malaria, a joint initiative of UNDP, UNICEF, WHO, and the World Bank, if malaria levels were to return to 2007 levels, it would cost $1.2 trillion in lost economic activity and cause 3.7 million deaths over the next fifteen years.

Sonia Shah's The Fever traces the history of malaria from prehistoric times.

This Economist feature outlines the challenges to eradicating malaria.

The WHO's "World Malaria Report 2015" [PDF], Roll Back Malaria's "Action and Investment to Defeat Malaria 2016–2030" and the Bill & Melinda Gates Foundation's "From Aspiration to Action" [PDF] detail strategies and targets in reducing the mosquito-borne illness.

This Motherboard article looks at global efforts to produce a malaria vaccine.

The Democratic Republic of Congo is Back on the Front Page

Kurdish Women and the Fight Against ISIS, With Gayle Tzemach Lemmon

Gayle Tzemach Lemmon, adjunct senior fellow in CFR’s Women and Foreign Policy program, sits down with James M. Lindsay to discuss the Kurdish women fighting ISIS and her experience on the ground in northeast Syria. Lemmon’s most recent book on women in Syria, The Daughters of Kobani: A Story of Rebellion, Courage, and Justice, hits bookstore shelves today.

Why a Cross-Strait Crisis Will Be Averted in 2021