Following China’s accession to the World Trade Organization in December 2001, the trajectory and ambitions of Chinese industrial development steepened, particularly as major multinational firms seek to open more contracts with China’s manufacturers. More than 100 million Chinese—roughly equivalent to one-third of the total U.S. population—now work in factories, concentrating primarily on low-tech production. Yet China’s manufacturing mix includes an increasing emphasis on high-end ventures. In automotive and aerospace manufacturing, the country already makes a significant share of the world’s auto and aircraft parts. But rapidly rising domestic consumption and cooperative ventures with international manufacturers put China in a position to challenge the G8’s dominance of high-end vehicle and aircraft production in the coming decades.

China’s auto sector, once an industry backwater, has emerged as a major global player. According to data from the International Organization for Motor Vehicle Manufacturers (OICA), a trade association, China was the world’s third-largest producer of cars in 2006, behind Japan and Germany, and also the third-largest producer of “motor vehicles” (which includes commercial vehicles like trucks and tractors), behind Japan and the United States. Chinese production accounted for nearly 7.2 million motor vehicles, over one-tenth of the world’s total production. These production levels reflect 25.9 percent growth from 2005 production levels—U.S. production, by contrast, shrunk by 6 percent. The shifting contours of the global auto industry are explored in depth in this Backgrounder.

Chinese auto exports, though they remain modest in a global context, are also growing at heady rates. In 2006, China exported (Xinhua) 340,000 automobiles, versus 173,000 in 2005 and 78,000 in 2004. China’s Vice Minister of Commerce Wei Jianguo says the country aims to lift its yearly export totals to $120 billion, or 10 percent of the world’s total trading volume, in ten years’ time. Marina Whitman, a professor at the University of Michigan’s Ross School of Business and a former executive at General Motors, says the vast majority of Chinese auto exports are unlikely to go to Europe or the United States, but rather to countries nearer to China geographically.

Notwithstanding China’s goals to increase its auto exports, the country’s domestic market remains the predominant focus of Chinese manufacturers. Domestic demand for automobiles has jumped dramatically since China’s accession into the World Trade Organization, including a 23.7 percent rise in auto ownership between 2005 and 2006. These numbers vault China past Japan as the world’s second-leading consumer of automobiles, behind only the United States (Xinhua). The Economist notes that China’s government has accelerated this trend by pouring billions of dollars into improving the country’s highway network, which is currently the world’s third most extensive.

The rapid development of China’s auto industry poses questions for the more established auto manufacturers in East Asia, including Japan and South Korea. According to OICA data, as of 2006, Japan’s total auto production remained at least 50 percent greater than China’s, though the same data shows China having nearly doubled South Korea’s production levels (Korea remains the world’s fifth- largest producer of motor vehicles, producing over 3.8 million per year). China’s emergence poses a substantial challenge for these regional competitors. It also poses potential problems for multinational firms, particularly U.S. carmakers like Detroit ’s “Big Three”—General Motors (GM), Ford, and Chrysler—which face growing questions about their global competitiveness. U.S. firms already face substantial threats from Japan’s Toyota, which in 2007 surpassed GM as the world’s largest car company; the idea that China could develop a Toyota-like market leader strikes fear in U.S. and European producers. Yet Whitman notes the effect of China’s rise on international manufacturers might be mitigated by market segmentation. At least in the short term, she says China is likely to focus its export activities on countries “closer to its income level.”

The aerospace industry is far trickier to break into than the auto industry. With one exception, Brazil, every country now competing in the global aircraft-manufacturing market was already doing so soon after World War II. According to a paper (PDF) from the University of Michigan’s business school, Brazil is the only new country since 1960 to manufacture civil aircraft at a rate of more than one plane per month. Moreover, newcomers to the aircraft manufacturing business, Brazil included, tend to focus on smaller planes. Beyond Boeing and Airbus, the major global producers of civil aircraft for international sale are firms like Brazil’s Embraer, Canada’s Bombardier, and Russia’s Sukhoi, all of which focus on regional jets.

Yet China’s civil aircraft-manufacturing industry is growing at a rapid clip and Chinese officials are setting lofty goals. China currently manufactures only small turboprop planes, including a sixty-seat jet called the MA60 and a model called the ARJ21 that can seat up to ninety-five people. China also makes helicopters, transport planes, and an array of sophisticated warplanes. But in March 2007 the country grabbed headlines by announcing plans to manufacture large, wide-body aircraft (Guardian) on a scale intended to compete with industry leaders Boeing and Airbus. Xu Guanhua, China’s science and technology minister, said that building a wide-body passenger aircraft ranked first among China’s research priorities.

Even by the most optimistic of timetables, China won’t be competing with Boeing and Airbus in the large passenger plane market for at least ten to fifteen years. The Economist says the country has a “long runway ahead,” noting that “the depth or expertise needed to build a wide-bodied airliner is still lacking.” John W. Bruns, Boeing’s senior executive based in China, says the country is “a couple decades away” from being able to realistically approach major international carriers with its planes. “They haven’t established their brand and their credibility in the marketplace yet, and they’ve got a long way to go to do that,” says Bruns.

Still, as with China’s auto industry, voracious domestic demand seems likely to gird steady growth, if not of wide-body aircraft production then at least of mid-sized models. Boeing predicted (WSJ) in September 2007 that China’s commercial aviation market will grow faster than any other country’s over the next twenty years and will require about 3,400 new airplanes at a cost of roughly $340 billion. Of those 3,400 planes, Boeing estimates 65 percent will be smaller, single-aisle jets—the kind China can more easily produce itself.

Graphic: Boeing 737, parts made in China 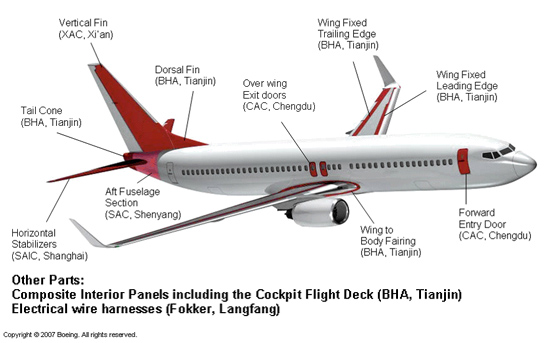 Currently, in both the auto and aerospace industries, China’s primary influence as a manufacturer comes not as a maker of fully-assembled automobiles and aircraft, but as a maker of parts that are used by other manufacturers. Loren Brandt, an economics professor at the University of Toronto who focuses on China, says auto parts are the focal point of China’s export market, so far as auto manufacturing is concerned. “Right now exports are on the order of $15 billion,” says Brandt. “That’s not a big, big number, but it’s growing very rapidly.” Brandt notes that virtually every multinational auto parts producers—including industry behemoths like Delphi, Lear, and Bosch —has set up shop in China.

This focus on parts exports makes sense, says Garel Rhys, an economics professor and auto industry analyst at Cardiff University in Wales. Rhys points out that auto parts are much more efficient to ship than completed automobiles. “Parts, wherever they’re made, can be stacked very efficiently in containers, and you can put a large number in, so the transport costs are not high,” he says. “With cars, you’re mainly shipping air.” With this in mind, Rhys points to a model where end production of automobiles will likely continue to take place regionally, with China supplying an increasing percentage of the parts used.

The same goes for aircraft-parts production, where China is also a major player. Bruns says every airplane Boeing makes includes parts from China. The Boeing 737 is probably the model most heavily reliant on Chinese parts. “They build the whole tail section, the vertical fin and the horizontal stabilizer, and then all the doors for the airplane. So if you’re just looking at the structure, that’s more than a tenth of the structure, maybe an eighth.” Jonathan Beard, the director of GHK Group, a consulting firm that focuses on airline and airport competitiveness, says this segmentation of production makes sense for Boeing because Chinese manufacturers increasingly take on some of the risks of production—say, if the fully assembled model doesn’t sell—making the arrangement a fuller partnership. “It’s more than just the routine outsourcing that you sometimes associate with manufacturing,” Beard says. Yet China’s parts exports are limited to fairly specific components of airplanes: “The majority of the work they’re doing today is in aluminum structure, big parts,” says Bruns. Indeed, for the planes China manufactures, it commonly imports more technical parts, like engines and “avionics,” or aviation electronics.

Given China’s proficiency at parts manufacturing, and its rapidly expanding domestic market for both automobiles and aircraft, joint ventures with multinational firms have flourished in the country. Boeing, which currently sells China about 60 percent of the aircraft the country purchases, cooperates with China on industrial production, as well as providing training and technical assistance to help the country develop its domestic airlines and airport network. Bruns calls it a “win-win proposition.” Airbus runs extensive operations in China, cooperating both in terms of manufacturing and training. Smaller manufacturers like Brazil’s Embraer have also successfully teamed up with Chinese manufacturers—and landed lucrative contracts to provide planes to China.

In the auto market, 70 percent of cars produced in China—including cars produced for domestic consumption—are made through joint ventures with non-Chinese companies. A state-owned Chinese company named Dongfeng has had a long-standing partnership with Honda. Since 1998, DongFeng has produced engines for domestically-sold Honda Accord, Odyssey, and Fit models. More recently, the companies teamed up in a venture they hope will result in joint exports to Europe and the United States. The U.S. firm Chrysler is working with a Chinese producer named Chery in a partnership the companies hope will result in exports to the U.S. market.