In May 2006, the Sudanese government signed a peace agreement with one of the rebel groups in Sudan’s western Darfur region. Yet one year later, the agreement is seen as a failure. Security has deteriorated and rebel groups have proliferated. International efforts have focused on pressing Khartoum to accept the deployment of a hybrid UN/African Union peacekeeping force, as called for in an August 2006 Security Council resolution. But in the long run, experts say peace will only come to Darfur through a negotiated settlement between Khartoum and the rebel groups. Widespread disagreement remains over how to revive peace negotiations.

What is the status of the Darfur peace process?

Several different actors are working to bring Darfur’s rebel groups and the Sudanese government to the table. Experts agree the best opportunity for restarting the peace process lies with a joint effort led by UN Special Envoy Jan Eliasson and AU Envoy Salim Ahmed Salim. Eliasson recently outlined a roadmap: align the different peace proposals, bring the rebel groups together, and begin negotiations. He hopes talks can start by the end of the summer.

What factors are hindering the process?

What are the provisions of the Darfur Peace Agreement?

The Darfur Peace Agreement (DPA) was signed in May 2006 by the Sudanese government and Minni Minawi, who heads a breakaway faction of the Sudanese Liberation Army (SLA). The rest of the SLA, along with the Justice and Equality Movement (JEM), refused to sign the agreement. Its terms provided for:

Who are the rebel groups that have not signed on and what do they want?

By some estimates, there are twelve groups, most of them offshoots of the original two rebel movements, the SLA and JEM. The SLA has splintered into several factions led by different commanders. Each has similar demands; namely, more compensation for displaced Darfurians (one group proposed $2 billion). The ICG reports, however, that some SLA leaders are calling for Darfur to become an autonomous region. 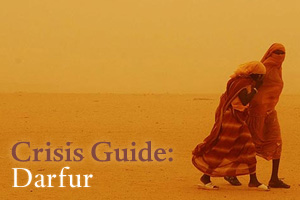 The JEM takes a more radical stance. It demands changes in the national power-sharing structure to give all regions rights equal to those of the South and to reestablish a rotational presidential conference of local representatives. Like the SLA factions, it seeks compensation for Darfurians and wants political rights to be allocated based on population. In June 2006, after the signature of the DPA, the JEM spearheaded the formation of an umbrella rebel group called the National Redemption Front (NRF). This move to unite rebel nonsignatories has strengthened JEM, as have the group’s links to Chad’s government.

How does the situation in South Sudan relate to Darfur?

Peace negotiations in Darfur could have repercussions for South Sudan, which enjoys tentative peace under the Comprehensive Peace Agreement (CPA). The CPA ended the region’s decades-long civil war in January 2005, established a power-sharing formula for the entire country until national elections in 2009, and called for a referendum on the South’s self-determination. Some experts argue that the world’s attention on Darfur has jeopardized South Sudan’s peace agreement.

The two peace processes are increasingly linked, others say, and should be acknowledged as such. The CPA’s power-sharing formula applies to the entire country, and thus the South’s former rebel group, the Sudan People’s Liberation Movement (SPLM), is concerned that talks in Darfur might lead to a reopening of the CPA. Sudan’s U.S. ambassador, John Ukec Lueth Ukec, a former SPLM member, said in an interview with CFR.org: “If we go back and open the door again on the CPA, that is going to be a disaster.” He argues that the agreement provides the framework for solving the situation in Sudan, because it calls for national elections that will allow the people of Darfur to choose their leaders. De Waal agrees that free and fair elections are the key to resolving both of Sudan’s crises and are “the best chance for the marginalized provinces to achieve political equality.” Yet others believe the ruling National Congress Party will not relinquish its grip on power. “I wouldn’t bet on elections as one of the ingredients for success,” says Prendergast.

Remembering Richard Holbrooke and His Contributions to the Congo

The Destabilizing Consequences of Fear and Frustration in the DRC