The U.S. Treasury and other government agencies have joined forces with the Federal Reserve in a sweeping attempt to stabilize beleaguered U.S. banks and facilitate credit flows to companies and individuals. The Treasury calls its framework for dealing with these problems the "Financial Stability Plan." The plan includes programs from an array of government agencies using taxpayer funds to create incentives that will jumpstart lending and other economic activity. Legislatively, much of the funding for the plan stems from the Emergency Economic Stabilization Act of 2008--the law which established the Troubled Assets Relief Program, or TARP, among other economic rescue programs. Treasury Secretary Timothy Geithner has promoted the plan (WSJ), saying it will allow free markets to set prices for mortgage-backed securities and other distressed assets, and that U.S. taxpayers potentially stand to profit from the investments the government will make. Critics have alternately criticized the plan as too small to matter or too willing to expose taxpayers to new losses.

Here is a short synopsis of the plan, with selected commentary from financial experts.

The plan mandates all U.S. banks with assets over $100 billion--including banks not specifically seeking government aid--to undergo a comprehensive "stress test" in coordination with all relevant U.S. government regulators. The goal of this test is to provide an objective diagnosis of problem areas on the banks’ balance sheets, to determine whether they have the capital necessary to continue lending. In the event that banks are deemed not to have enough capital, they will become eligible for government assistance through the Capital Assistance Program, or CAP. The goal of this program, according to the Treasury, is to provide a "capital buffer" to help banks absorb losses while they work to stabilize their operations and seek capital from private markets. In coordination with the CAP, the Treasury is establishing the Financial Stability Trust to manage investments the U.S. government makes in these banks. Funds provided to banks through this program include requirements meant to ensure the banks lend as much as is prudently possible back into the economy.

- Writing in early February, CFR’s Roger Kubarych explained some of the challenges associated with objectively assigning value to some of the assets on the balance sheets of banks.

- On March 16, Wells Fargo Chairman Richard Kovacevich criticized the stress test program (Bloomberg) for forcing banks to comply with heightened regulations even if they had not actively sought TARP bailout funds. A growing number of banks contend they should be allowed to return taxpayer bailout funds and free themselves of some of the restrictions (CNN) attached to these cash grants.

The government will create a "Public-Private Investment Program" (PPIP) to facilitate private-sector investments in debt and other assets in order to get bad assets off the balance sheets of banks and get private markets moving again. In essence, the plan provides loans on generous terms to investors like private-equity groups and hedge funds, to facilitate their efforts to buy distressed assets from struggling U.S. banks. Analysts speculate that bargain-seeking investors will be attracted to these kinds of purchases, provided that they can get loans to finance the deals. The Treasury announced on March 23, 2009, that it would draw $75 billion to $100 billion from TARP "bailout" money in order to fund this investment program and spelled out in greater detail how it will work (PDF). The announcement, much anticipated by investors, lifted major U.S. stock indices over 5 percent. The program distinguishes between distressed debt and other distressed securities. Purchases of distressed debt will be financed by the Federal Deposit Insurance Corporation (FDIC), whereas purchases of other forms of distressed securities will be financed through the Fed, via its existing TALF framework (see below for more on the TALF). The chart below, courtesy of the U.S. Treasury, depicts the organizational structure of the PPIP. 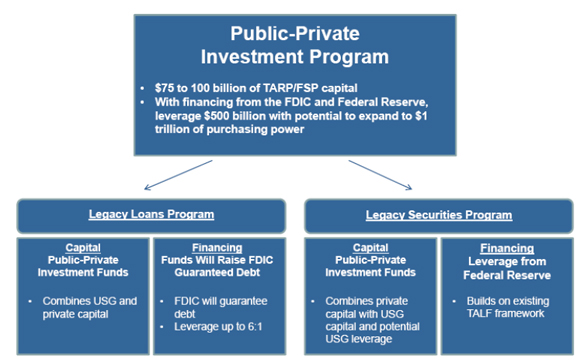 - Geithner explains the PPIP in a Wall Street Journal op-ed.

In recent years, the model for U.S. consumer credit has relied on a system in which lenders repackage the debt from commercial loans and sell them to other parties. Small mortgage companies typically would bundle together debt from several dozen such loans and sell them to a larger bank. This system froze during the course of the financial crisis. Fearful of defaults and shaken by reduced demand for securitized debt, loan originators severely cut back on lending. Unable to gain access to loans that once came easily, U.S. consumers and small businesses dramatically reduced spending. Reduced credit translated into reduced demand for many consumer products, both in the United States and internationally, broadening the economic downturn. 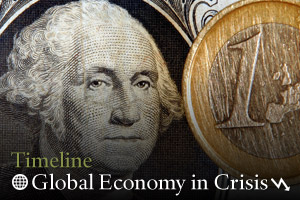 In order to reverse this trend, the U.S. Federal Reserve has launched a program called the Term Asset-Backed Securities Lending Facility, or TALF. Originally a $200 billion program focused specifically on consumer lending, the Fed announced plans to expand the program to provide up to $1 trillion in loans to cover investors interested in buying different kinds of securitized debt, including mortgage debt. In some ways the TALF parallels the PPIP. The goal of the program is to provide loans to investors in an effort to get them to buy risky securities, ideally at profitably low prices, and eventually restore market function. Through the TALF, the Fed will provide loans on favorable terms to investors who hold assets with AAA credit ratings as collateral. These investors can buy securitized debt comprised of consumer and small business loans. The hope is that this, in turn, will prompt loan originators to lend more.

- Early drafts of the TALF brought complaints from investors about the degree of access into their ledgers the program granted the Fed. The Fed, accordingly, revised some of the requirements (WSJ) which had existed in the initial version of the program.

- New York Federal Reserve President William C. Dudley explained the Fed’s regulatory role, including its plans for the TALF, in a recent speech at CFR. U.S. Fed Chairman Ben Bernanke, also speaking at CFR, argued for financial regulation aimed at smoothing out the cyclical booms and busts in financial markets.

- The Financial Times’ Lex column argues that legal difficulties surrounding the rollout of the TALF demonstrate the challenges inherent in remaking a vast market along government-dictated lines.

Other Aspects of the Plan

Beyond the three strategies listed above, which form the core of the Financial Stability Plan, the plan includes a few other programs. It includes a scheme for improving financial transparency among firms "receiving exceptional assistance." This program draws from recommendations from several government bodies, including the Congressional Oversight Panel and the Government Accountability Office. The plan also sets up programs aimed at easing financial pressures on the housing market by driving down mortgage rates and committing funds to stave off foreclosures. Finally, the plan includes a provision for launching a new "Small Business and Community Bank Lending Initiative," serving as a different mechanism for getting loans to small businesses.

- This fact sheet (PDF) from the Treasury lays out more detail about each of these three initiatives.

See How Much You Know About Venezuela

Test your knowledge of Venezuela, from its role in global oil markets to its increasing political instability.