As the social and economic lives of citizens become increasingly digital, reliable and rapid access to the internet and its wealth of content has become essential. High-speed internet broadband is no longer seen as a luxury, but as basic infrastructure. "Like electricity a century ago, broadband is a foundation for economic growth, job creation, global competitiveness, and a better way of life," says the U.S. Federal Communications Commission’s National Broadband Plan.

Some experts fear the United States is falling behind other developed nations in broadband adoption and performance, but others say such concerns are often exaggerated and unsupported by analysis. In addition, researchers are divided on the competitive benefit of ever faster access and debate the role of government in supporting broadband development.

Broadband encompasses a host of technologies that connect users to the internet faster than traditional telephone line dial-up connections. Higher connection speeds are required to take full advantage of rich online content, such as high definition online videos. In 1999, the FCC specified that speeds greater than 0.2 megabits per second (up and downstream) would be considered broadband; this was updated to 4 Mbps (downstream) and 1 Mbps (upstream) in 2010. However, in early 2013, some emerging technologies such as Google Fiber (up to 1,000 Mbps, or 1 Gbps) offer speeds that far exceed these thresholds.

Cable, DSL, fiber optic, and high-speed wireless technologies all are examples of broadband services. While mobile and fixed (land-based) broadband often compete, they also complement one another, as many users desire reliable speed at home and flexibility on the move. MIT economist William Lehr points out that mobile offers a better value proposition for users that favor portability over speed, as it provides slower speeds at lower costs. Meanwhile, fixed broadband has a higher share of connections with speeds above 3 Mbps, naturally more useful in applications where speed is important.

Google is building its own fiber optic network in Kansas City, and has announced plans to expand this infrastructure to Austin, Texas, and Provo, Utah. The search giant appears to see these projects as demonstrations rather than part of a nationwide plan. An analysis by Bernstein Research seems to confirm this: "We remain skeptical that Google will find a scalable and economically feasible model to extend its build out to a large portion of the U.S., as costs would be substantial, regulatory and competitive barriers material, and in the end the effort would have limited impact on the global trajectory of the business."

Nonetheless, Google maintains these pilot projects will spur greater industry competition and consumer demand for high-end broadband: "We believe the internet’s next chapter will be built on gigabit speeds, and we hope this new Google Fiber city will inspire communities across America to think about what ultrafast connectivity could mean for them."

The contribution of general internet access to economic growth is better understood than the added benefits of broadband. A McKinsey Global Institute study attributed 3.4 percent of GDP in major developed and emerging economies to the internet and found that small and medium businesses heavily using internet technologies grew and exported twice as much as competitors, while also enjoying a 10 percent productivity advantage. These analysts also estimated that the internet created 2.6 jobs for every job it destroyed, and determined that 21 percent of GDP growth over the past five years in mature economies was due to the internet, with three-quarters of this coming from traditional industries.

Since broadband makes use of the internet quicker and easier, many have argued that it necessarily boosts economic competitiveness. Connected Nation, an American nonprofit organization with the mission of improving access to broadband for underserved populations, found that nearly one in three U.S. businesses earn revenues from online sales, and even more use the internet to advertise job openings or accept applications. All of these tasks are enabled or potentially improved by the faster speeds broadband provides.

Organizations that compare broadband services and performance among nations offer varying and sometimes conflicting appraisals of how the United States stacks up against its peers. According to the OECD, while the United States is a world leader in terms of overall broadband subscriptions, it is falling behind other nations in adopting broadband throughout the population. In 2002, the United States ranked sixth among thirty nations in fixed broadband penetration, but since 2007, its rank has fallen to fifteenth, while it ranks eighth in wireless broadband penetration. Another report by Akamai, a leading content delivery network, ranked the United States eighth in the world in average peak connection speed in 2012. But analysts note that in assessing broadband, advertised speeds are often far higher than the actual speeds customers experience. 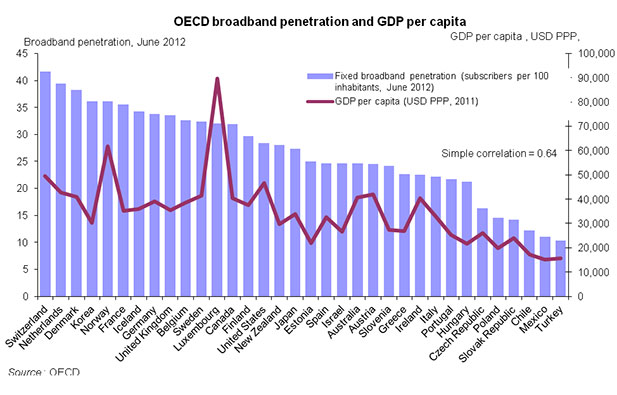 Meanwhile, a February 2013 report from the Information Technology & Innovation Foundation (ITIF), a nonpartisan think tank, concluded that the United States is a leading broadband nation [PDF] in a number of areas, including intermodal competition between cable and DSL fiber-based technologies, 4G/LTE mobile broadband, and entry-level pricing. Notably, the report says that the United States effectively utilizes private competition and investment to drive broadband growth. For instance, in 2011 American firms bought more fiber optic cable than all of Europe.

A Deloitte paper on 4G/LTE mobile broadband asserted that rapid deployment of these networks would allow U.S. entrepreneurs to seize new opportunities before competitors in other nations. The McKinsey study found that the United States retains the greatest share of the global internet economy, 38 percent, compared to 14 and 10 percent from Japan and China respectively. Whether increased broadband penetration would increase this share is unclear, though the study found that the internet’s contributions to the U.S. economy were not proportional due to lower internet usage among Americans and higher U.S. per capita GDP. The ITIF report similarly saw a need for policies to encourage more Americans to adopt broadband.

Crandall sees the importance of expansion of wireless access to economic growth in emerging economies, but is skeptical of the link between the spread of ever higher fixed broadband speeds and economic growth in developed economies: "For those who work remotely, [broadband access] is very important, but most Americans don’t work remotely, but [instead work in] in business establishments [with broadband]. Though that isn’t to say continued diffusion is unimportant, because broadband does provide value to consumers, and ultimately economic activity is valuable because of what it conveys to consumers."

Nations such as Australia and France have national broadband investment programs that use government funds directly to build new broadband infrastructure. On the other hand, U.S. policy is designed to encourage private sector competition and growth through means such as the development of performance standards and competition regulations. The 2010 National Broadband Plan has six goals, from allocating more spectrum to wireless and mobile broadband, to extending affordable access to 100 Mbps download speeds to 100 million U.S. households by 2020. This target speed is about ten times faster than typical broadband services today.

The NBP also calls for a national wireless interoperable broadband public safety network that will support the needs of first responders. Investigators at work during the Boston Marathon bombings had difficulty sharing data and video evidence, highlighting the need for the improved communication network being developed by FirstNet, an independent authority within the U.S. Department of Commerce.

Broadband in the United States has grown rapidly, from 2.8 million high-speed lines for households and small businesses in December 1999 to 206 million in June 2011. But 19 million Americans still live in areas where fixed broadband is unavailable, most in rural areas where low population density makes expanding access considerably more expensive. The federal government has historically supported the rural deployment of other utilities through programs such as the Rural Utilities Service of the U.S. Department of Agriculture and the Universal Service Fund (USF) of the FCC.

Some analysts believe that communities without broadband access are at risk of being left behind. For instance, as more school districts contemplate discarding paper textbooks, and students look to take advantage of free massive open online courses, access to broadband could increasingly determine educational opportunities. As Brian Mefford, CEO of Connected Nation, explained in an interview with CFR: "If a rural community doesn’t have adequate ubiquitous broadband to support mobile education applications then their local school districts won’t be able to make that pivot, which will quickly create an educational and ultimately an economic disadvantage for the community. To the extent that broadband is improving education in a community then it is also impacting workforce readiness and job growth.

Some communities are moving ahead on their own broadband projects in an effort to attract and retain new workers and businesses. Chattanooga, Tennessee, launched an ambitious campaign in 2010 to provide 1Gbps connections to its roughly 170,000 homes and businesses. "The overriding consideration is that this is a real tool for economic development for our community," Harold DePriest, chief executive of Chattanooga’s utility EPB, told the New York Times. Mefford observed that "companies searching for new places to expand their business will dismiss a community that doesn’t meet a certain threshold for broadband availability. They also look at the community’s profile for broadband use as an indicator of workforce sophistication."

Analysts say municipalities that own the physical infrastructure can ensure competition by allowing private firms to lease access and compete for subscribers. "Local governments can aggregate assets such as utility poles, towers, rooftops, dark fiber, easements, et cetera, while also streamlining access to these assets. In doing so, they can create value for the community as well as a revenue stream that results from private use of those assets," said Mefford.

However, some question whether local governments should lead broadband projects, particularly when what works for one city may not work for another. For instance, Chattanooga’s fiber optic system is conveniently laid over the city’s "smart grid" network, a digitally powered electric infrastructure that received subsidies under the 2009 stimulus legislation. A bill introduced to the Georgia state legislature in February 2013 would limit the power of local governments to expand broadband service.

The Information Technology and Innovation Foundation reports in 2013 on "Where America's Broadband Network Really Stands."

This Backgrounder frames the international debate over internet governance.

In this 2012 CFR meeting, experts discuss the FCC's ongoing mission to promote Internet freedom, competition, innovation, and investment in broadband services around the globe.