Sustainable economic growth relies on innovation, particularly for the United States and other developed nations with increasingly knowledge-based economies. A well-designed patent system encourages both the creation and spread of innovations. Reform legislation passed in 2011 promises significant improvement to the U.S. system by bringing its rules into greater alignment with international norms (e.g. first-to-file), and increasing the patent examiner staff of the U.S. Patent and Trademark Office.

Yet some analysts caution that the U.S. patent system still may be a drag on growth, as expensive litigation saps resources and benefits from innovations. The most egregious cases often involve software patents, which large corporations have used to keep competitors out of consumer markets, and so-called "patent trolls" that extract licensing fees and settlements. Some experts say the high legal costs and associated economic risk of patent litigation--particularly in regard to software patents--may effectively act as a tax on innovation and place the United States at a competitive disadvantage.

The U.S. Constitution empowers the Congress to grant patents and copyrights "to promote the Progress of Science and useful Arts" (sic). Patents do this by granting a firm a legal monopoly on an invented process, machine, or product for a limited period of time in exchange for public disclosure.

"Applicants and patent offices both want as streamlined and consistent a set of rules as possible." -- Arti Rai, Duke University

Innovators need a sufficient amount of time to secure benefits from their insights commensurate with their risk, effort, and investment. If policymakers set too short a time, there will be insufficient incentive to invent, and progress will slow. But if patents have an excessive length, then society’s benefits--including the ability of others to build upon the original insight--are delayed. The United States patent length is the larger of twenty years from filing, the minimum length allowed under the World Trade Organization’s TRIPS Agreement, or seventeen years from the patent’s issue date.

TRIPS, which went into effect in 1995, sets intellectual property rules governing trade among all 157 WTO members on patent and copyright issues such as enforcement procedures, rights granted, and applicability to all fields of technology. Still, there is considerable flexibility within this framework. In the United States software is commonly patented, often with broad applicability, but in Europe, more stringent criteria are applied.

Differences also exist in the level of patent enforcement. China, in particular, has attracted attention for perceived lax enforcement. For instance, under Chinese law, patents can only be infringed upon if goods are sold within China; export-only manufacturing is therefore excluded (PDF) from enforcement. Historically, more advanced economies have sought to protect intellectual property more zealously than developing nations.

The Leahy-Smith America Invents Act (AIA) sought to harmonize the U.S. patent system with the rest of the world by moving to a first-to-file system and including foreign disclosures and prior art in determining patentability. Signed into law by President Barack Obama on September 16, 2011, it was the largest patent reform since 1952. AIA also granted the U.S. Patent and Trademark Office (USPTO) more power to set fees and review granted patents. Sen. Patrick Leahy, (D-VE) co-sponsor of the measure (Bloomberg), said it "will ensure that inventors large and small maintain the competitive edge that has put America at the pinnacle of global innovation."

This edge has been under threat as foreign-based inventors have increased their share of U.S. patents, even as U.S.-originated patents have grown. From 1998 to 2011, foreigners increased their annual share of granted U.S. utility patents from 45.6 to 51.6 percent. Much of this growth was in East Asia; the European Union maintained a growth rate roughly equivalent to the United States and saw its share slip from 15.5 to 13.6 percent. Japan maintained its status as the top foreign patent originator with a share of 20 percent of U.S. utility patents. South Korea grew from 2.2 to 5.5 percent, passing Germany to become the second-largest foreign U.S. patent originator. Taiwan grew from 2.1 to 3.9 percent, while China went from less than 0.1 to 1.4 percent. 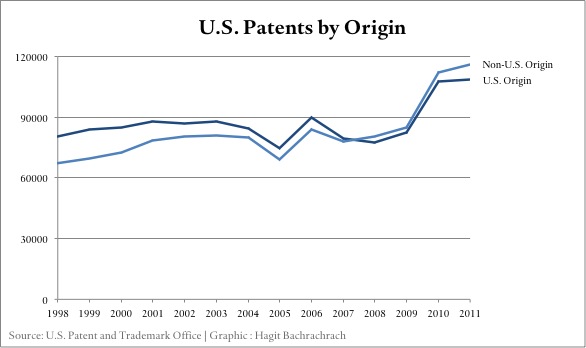 Duke University’s Arti K. Rai, who led a policy analysis of AIA at the USPTO from 2009 to 2010, believes the legislation will address patent delays and quality concerns by allowing the agency to charge fees commensurate with what it will actually cost to process applications. Higher fees will allow the USPTO to increase efficiency by hiring more patent examiners with better skills.

Futhermore, Rai said one of the benefits of the U.S. transition from a first-to-invent system to a first-to-file system will be to "have a procedure more in line with the rest of the world for purposes of easing burden on applicants who file in multiple countries and for patent offices to benefit from work-sharing agreements."

Harmonization of global patent standards reduces costs for multinational corporations who pursue legal protections in many major markets, according to experts. But while AIA brought the U.S. patent system closer to others, minute differences among legal systems are important because patents are traditionally challenged and narrowed in court.

Adjudicating patent disputes in court is an expensive, lengthy, and uncertain process. Over the past two decades, the number of patent disputes has steadily risen (PDF). A prominent example is the global battle fought between Apple and Samsung, which has yielded mixed results, including dismissals, product bans, and fines.

In August 2012, a San Jose federal court awarded Apple a $1 billion victory (NYT) after a South Korean court found violations (WSJ) by both companies and a UK court ruled for Samsung (AP). Samsung and Apple’s patent war is far from over, and a Samsung case against the iPhone 5--among other Apple devices--is already filed, with a 2014 trial date expected (Bloomberg). 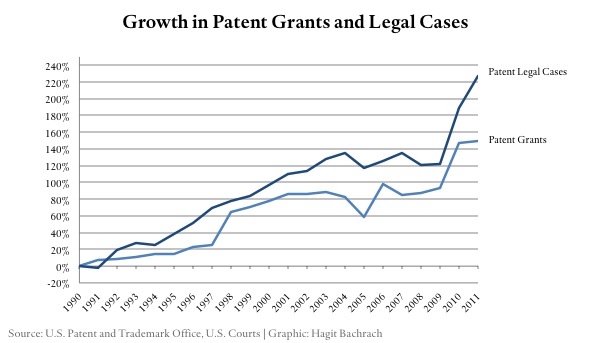 As patents are increasingly fought over, some experts are calling into question the current system. Richard A. Posner, an influential judge of the Seventh Circuit of the U.S. Court of Appeals, has become an outspoken critic.

Posner sees several problems with the current U.S. patent system, and argues for different patent lengths by industry because the cost of innovation varies widely and the benefits of patents may wane soon in markets with shorter product cycles or in markets where patents do not confer a secure advantage.

For instance, new drugs require rigorous tests for safety and efficacy—often over ten years’ worth—which raise costs and reduce the commercial value of a twenty-year patent on a drug that is otherwise easy to copy. In contrast, consumer electronic innovations have far lower up-front costs, and often confer a first-to-market advantage. Yet both receive the same patent protection.

Many analysts agree that the flaws in the current patent system could be a significant drag on growth. However, quantifying the total impact is difficult because the forgone benefit of undeveloped innovations is largely unknown.

Patent assertion entities (PAEs), also known also as "patent trolls", are often derided as a particularly egregious drain on innovation. PAEs do not make or sell anything, but rather, look for violations—often by firms who developed their technology without prior knowledge of the patents—and then pursue litigation and licensing agreements. These tactics are often most effective against smaller companies who are unable to mount a vigorous legal defense, though some PAEs target large firms with deep pockets.

Lodsys, a well known PAE, has pressed some app developers for a licensing fee of 0.575 percent of revenue for patent claims to in-app payments, forcing Apple to intervene (ArsTechnica).

The economic costs of PAEs are mounting. In addition to direct legal costs—$29 billion in 2011 alone (PDF)—there is the indirect cost of reduced investment in innovation, which is estimated to have cost the U.S. economy $80 billion annually (PDF) in the last five years. Accelerating losses mean that approximately double the shareholder value has been lost in the past five years than in the prior fifteen years. Analysis has also shown that PAE activity also slows the spread of innovation.

But PAEs are not wholly negative, as they add liquidity to the secondary market for patents, allowing patent holders to monetize their assets. This particularly benefits small inventors unable to defend their claims and investors liquidating a failed startup. Additionally, some product producing firms use PAEs to pursue patent cases without making themselves vulnerable to countersuit. One example is a suit against Apple (CNET) by MobileMedia Ideas, a PAE co-owned by Sony, Nokia, and the owner of the MPEG video standards.

Studies have found that PAEs are far more prominent (PDF) in the United States than in Europe or Japan. Some explanations for this include the far greater ease of securing software and business model patents, the lack of a "loser-pays" rule, less frequent patent invalidation, and the large size of the U.S. market (even under the European Patent Convention, patents rights are only national).

The bipartisan SHIELD Act—proposed in August 2012—would allow courts to award full litigation costs—including all reasonable attorneys’ fees—to defendants of alleged infringement of computer hardware or software patents if the plaintiff cannot demonstrate a "reasonable likelihood of succeeding." While this law would help curtail spurious cases, the law does not explicitly target PAEs and may also deter small firms from attempting to enforce their patent rights against large firms.

Should Software Be Patentable?

The majority of PAE cases are built around software patents, which the USPTO has been much more willing to grant than patent offices of Europe. The value and appropriateness of software patents are often debated. One notable example is Amazon’s one-click buying (Forbes), which received a U.S. patent but also could just be a good business model, rather than a unique innovation whose ultimate value to society is worthy of granting a temporary monopoly.

Noted venture capitalist Fred Wilson has argued on his blog that software patents should not exist. "They are a tax on innovation," he wrote. "And software is closer to media than it is to hardware. Patenting software is like patenting music."

Others, however, see benefits in software patents. In an opinion piece in Wired, Manny Schecter, IBM’s chief patent counsel, stated, "Software is increasingly the way innovation is implemented in all industries," and that "eliminating patents for software will not enhance innovation or benefit our economy." He noted that the success of U.S. software companies (six of the world’s top ten) correlated with the protections offered by the U.S. patent system, and suggested that innovation was not stifled by patent litigation.