In the wake of the recent economic crisis, many statehouses and city halls face worrying fiscal stress that could have national ramifications. Federal stimulus funding—a multi-year lifeline for state and city coffers—is petering out before tax revenues fully recover and fo­rcing many sub-national governments to consider tax hikes and/or spending cuts that could slow recovery and, in some cases, undermine long-term growth. In particular, funding for infrastructure and education—of which states and cities are by far the primary sources—are under the budget knife.

A particular concern for many sub-national governments is ballooning personnel costs, including public employee/retiree pensions and health care. In some acute cases, this financial burden has swept governments into bankruptcy protection; in others, broad changes in policy will be required in order maintain long-term solvency. And at the state level, the soaring costs of Medicaid threaten to crowd out other spending in the long term. A potential spillover of the eurozone debt crisis or further cuts in federal assistance in the near-term could exacerbate these fiscal woes.

How do state and local governments budget?

Most state and local governments keep two budgets. The operating budget, which is often simply referred to as the "budget," funds ongoing outlays such as employee salaries, payments for services, and interest on long-term debt. The capital budget, which is used to fund major infrastructure projects (e.g., bridges, roads, water works), issues long-term debt (bonds).

Unlike the federal government, states cannot run (operating) budget deficits. Every state in the union, with the exception of Vermont, has some type of balanced budget requirement—though many states have employed "fiscal gimmickry" in recent years (such as selling assets and then leasing them back) in order to circumvent the law. Under state laws, most municipalities must also keep balanced books.

Some federal lawmakers have expressed concerns about mounting municipal debt, but the numbers suggest that aggregate levels remain within historical parameters. As of the third quarter of 2011, state and local governments had $2.99 trillion in total outstanding debt, of which 98.4 percent was long-term, according to the Federal Reserve. Moreover, interest payments on this debt generally make up just 4 to 5 percent of current state and local outlays—no more than in the 1970s. In contrast, the U.S. national debt has risen dramatically over the same time period, approaching 75 percent of GDP.

Why are state and local budgets relevant?

The U.S. national economy is composed of a vast collection of local and regional economies, where state and local policies often play a significant role. Collectively, state and local governments outspend the federal government on direct goods and services, employ twice the workers of the domestic manufacturing sector, and are responsible for roughly 12 percent of national GDP.

State and local governments fund almost 90 percent of the $1.15 trillion spent nationally on K-12 education (2011-2012), as well as provide substantial financing for the public university system, which graduates the majority of U.S. college students. Pointing to the roughly 2 million high-skilled jobs currently unfilled in the United States, U.S. Secretary of Education Arne Duncan said that the country "doesn’t have a jobs crisis, we have a skills crisis." Experts say growing the ranks of college graduates is essential to future U.S. prosperity. However, the same WEF report ranked the United States thirty-seventh and twenty-seventh, respectively, in the quality of primary and higher education. Notably, while education has typically been the largest budget category of total state spending, it has recently been exceeded by Medicaid. 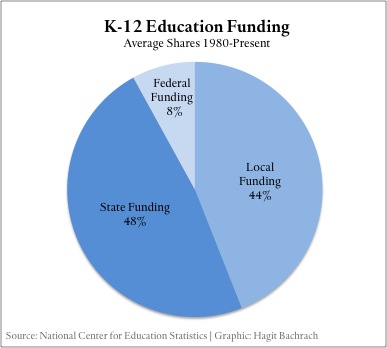 At a more basic level, states and cities are where "life is lived" and economic decisions are made. While budget austerity at the federal level may seem removed to many families and businesses, the effects of cutbacks in their home states and localities are often very tangible. Cuts to police and fire departments, for instance, mean some neighborhoods are inherently less safe. Fewer teachers and larger classrooms erode the quality of education. Crumbling roads and bridges discourage businesses from investing, expanding, and hiring.

Speaking to the New York Times, the mayor of Columbus, Ohio, Michael Coleman, emphasized the tradeoffs many fiscally stressed cities weigh when considering budget cuts. "Part of selling a local economy [to businesses] is selling the quality of life in that local economy. So if you don’t have good streets and good parks, if you don’t have a strong safety force and a strong fire department, if you don’t have the ability to grow the economy locally, businesses will not locate there," he said.

What’s the scope of state and local budget stress?

The sheer number and diversity of states and municipalities defies a sweeping appraisal of fiscal health. However, the recent deep economic recession (December 2007 to June 2009) and lagging recovery have put many sub-national budgets in unusually dire straits.

Depressed tax revenues, elevated social spending (unemployment insurance, welfare, Medicaid, etc.), and, in many cases, rising personnel costs have squeezed public purses at both ends. The situation is particularly bleak at the local level, where many balance sheets have been significantly battered by the collapse of home values (and property tax revenues).

Compounding this fiscal plight, federal stimulus largesse to states and cities is drying up. For FY2012 (ending in September), states and cities received just $24.1 billion in aid, down from an average of roughly $78 billion for the prior three years. For FY2013, they are projected to collect just $14.3 billion. 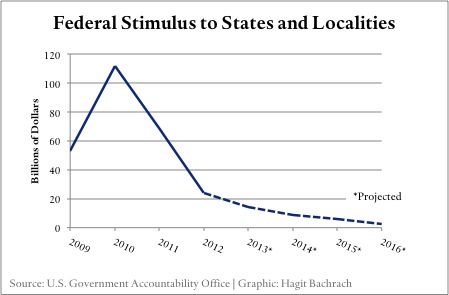 What’s the fiscal outlook for states?

According to the Center on Budget Policy and Priorities (CBPP), the gap between the aggregate revenues states will take in for FY2013 and what they will need to spend is $55 billion (for thirty-one states).

Most states will have to close these gaps with either spending cuts or tax increases—austerity measures that pile on top of any instituted in prior years. "The additional cuts mean that state budgets will continue to be a drag on the national economy, threatening hundreds of thousands of private and public sector jobs, reducing the job creation that would otherwise occur," says CBPP.

On average, state revenues remain 5.5 percent below pre-recession levels, and are not projected to fully recover soon. Indeed, even if revenues keep increasing at 8.3 percent—the relatively high growth rate they achieved in FY 2011—they still wouldn’t reach historically normal levels until 2019, according to CBPP.

In a 2010 report, the Pew Center on the States highlighted the massive pension funding shortfall many states will have to confront in coming decades. The gap between what statehouses have promised to pay their employees in retirement and the assets they have put away stands at $757 billion. The health care funding gap adds another $627 billion. However, there are significant differences between states.

What’s the fiscal outlook for municipalities?

Unlike states, municipalities (of which there are over 87,000, including cities, towns, counties, school districts, and other public entities) can file for federal bankruptcy protection, known as Chapter 9 under the U.S. bankruptcy code. Though they are historically rare, a series of high-profile bankruptcy filings in recent years has drawn the attention of national media and led to speculation about a looming wave of municipal bankruptcies. In a particularly ominous move, Moody’s downgraded roughly 300 U.S. municipalities in August 2012—half of which affected debt of cities and school districts. It was the most for any quarter in over a decade.

The recent recession certainly affected all cities, but bankruptcies came about for various reasons. The experiences of Harrisburg, Pennsylvania, and Jefferson County, Alabama, both of which filed in late 2011, are largely the result of poor infrastructure investments and political dysfunction. Alternatively, the challenges faced by many cities in California, such as Stockton and San Bernardino, largely stem from a precipitous drop in home values. In other cities, like Vallejo, California, and Central Falls, Rhode Island, the main problem was escalating personnel costs.

Indeed, the ballooning cost of labor--wages and benefits for current and former city workers--is a very common problem in cities across the United States. The top two negative budget factors cited by city finance officers were employee/retiree health and pension benefits, according to a 2012 National League of Cities report. Other fiscal pressures cited by city officials include eroding local tax bases, infrastructure costs, and cuts in state and federal aid. However, the NLC survey indicates that most cities are better able to make ends meet in 2012 than in 2011, despite projections of a sixth consecutive year-over-year decline in revenues.

What are some troublesome cuts states and cities are making?

Shrinking budgets have forced many states and cities to tighten their belts in ways that will likely have negative implications for future economic growth, including cuts to education and infrastructure. According to a September 2012 report from CBPP, funding for K-12 education declined in twenty-six states for the 2012-2013 school year; and remains below 2008 levels for thirty-five states. "The cuts counteract and sometimes undermine education reform and more generally hinder the ability of school districts to deliver high-quality education, with long-term negative consequences for the nation’s economic competitiveness," says the report.

Additionally, state support for public higher education dropped by 12.6 percent, on average, in constant dollars between FY2006 and FY2011. "States have cut their support for higher education despite rising enrollment and widespread recognition that higher education is key to both state and national competiveness and growth in employment," says the State Budget Crisis Task Force.

Infrastructure spending is facing similar stress. One in three city finance officers across the country reported delaying or cancelling infrastructure projects in 2011. Combined state and local funding for public construction fell to just $242.6 billion in May 2012, according to the U.S. Commerce Department, its lowest level in six years.

The State of California cut its transportation spending by 31 percent from 2007 to 2009; Texas shrank its funding by 8 percent. Making matters worse, funding declines come at a time when U.S. infrastructure is already described as "crumbling," according to the American Society of Civil Engineers. The ASCE scored U.S. national infrastructure with a grade of "D" in 2009.

What are some innovative initiatives states and cities are taking?

Periods of prolonged economic stress frequently force state and local officials to make tough choices between raising taxes—which is seldom popular—or adequately funding pensions, schools, roads, and bridges. Another option is simply to innovate and, in the process, do more with less.

Some state and local governments are undertaking infrastructure initiatives that leverage private investment. Chicago is launching a $7 billion Infrastructure Trust that will rely primarily on private capital to finance city projects, while similar projects have shown promise in San Francisco and Indianapolis. New York State has created a new state infrastructure bank intended to leverage $15 billion in investments into state projects.

In order to stretch the K-12 education dollar, many experts support greater efficiencies through the use of technology and e-learning tools like Khan Academy. The town of Mooresville, NC, has become "the de facto national model of the digital school," by centering instruction around laptops issued to each of its middle and high school students. While the town ranks one-hundredth out of 115 in the state in dollars spent per student, it’s third and second, respectively, in test scores and graduation rates.

Similarly, higher education institutions are currently experimenting with digital education platforms, though the most notable examples thus far are at elite private universities. However, the National Center for Academic Transformation has helped scores of schools, including public institutions, redesign courses using technology in a way that both reduces costs (37 percent on average) and improves learning.