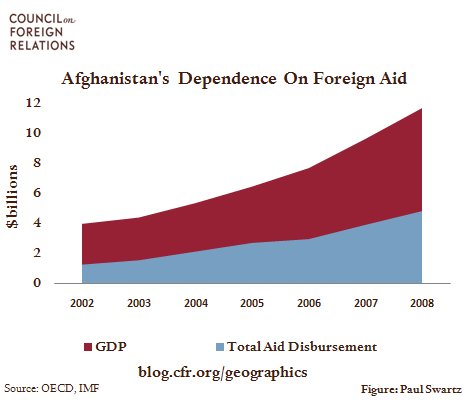 The U.S. is increasing its military and civilian presence in Afghanistan as part of the Obama administration’s efforts to bring stability to the region and reduce the threat of terrorism at home. Economic growth is critical for building a stable society in a war-torn country. Although Afghanistan’s economy has grown by 20 percent annually since 2002, this growth has largely been driven by foreign aid. Aid has risen by 25 percent annually since 2002, increasing from 32 percent of GDP in 2002 to 42 percent in 2008. These massive aid inflows have fueled corruption, and leave the economy exposed to destabilizing shocks once aid is withdrawn. Building a functional, self-sustaining Afghan economy is therefore vital to the success of the U.S. and coalition mission in the country.

Woodward: Key in Afghanistan-Economy, Not Military

The Interim Indian Budget: Jobs Are the Bigger Issue