You tend not to notice oxygen until it’s gone. That saying came to mind as I read the results of the Chicago Council on Global Affairs’s annual survey of American attitudes on foreign policy, which was released this week. (Full disclosure: I sit on the survey’s advisory committee.) Since taking office, President Donald Trump has sought to translate his America First campaign promises into policy. Yet the Chicago Council’s survey results suggest that rather than rallying to the president’s side, Americans have grown fonder of the foreign policy approach he is trying to upend.

The public’s newfound appreciation for the old way of doing business—let’s call it liberal internationalism—can be seen across a broad range of survey questions. Take the question on what role the United States should play in the world, where the numbers favoring an “active” role hit highs not seen since the immediate aftermath of the September 11 attacks: 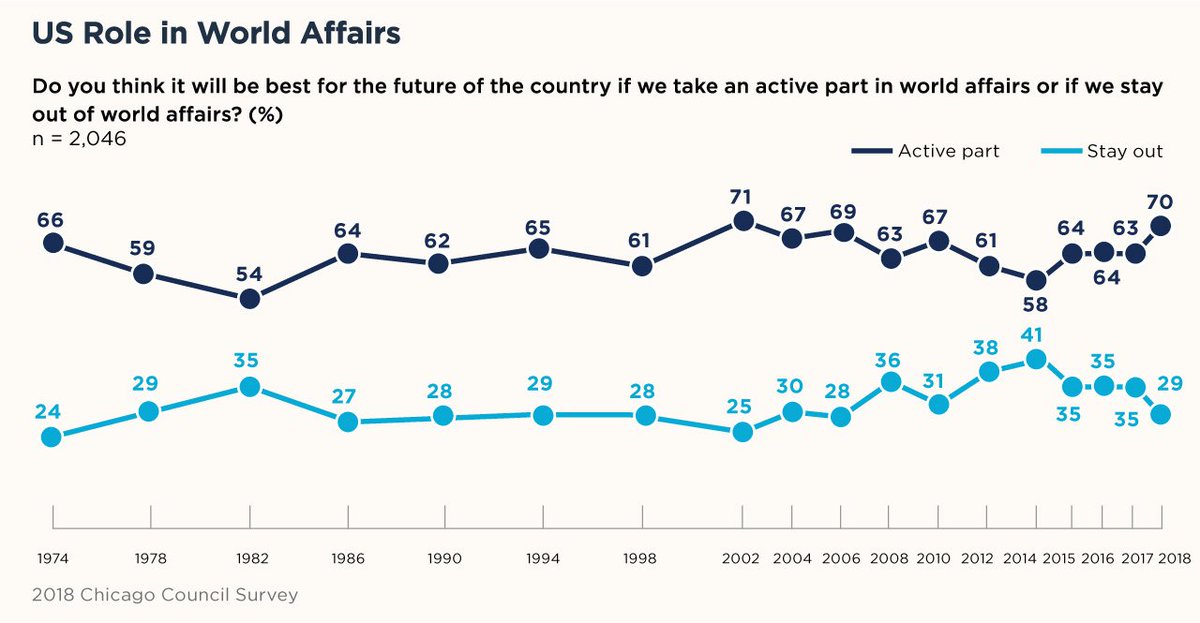 Or whether the United States should remain committed to NATO, where overall support remains unchanged and the percentage of Americans favoring an increase in the U.S. commitment grew: 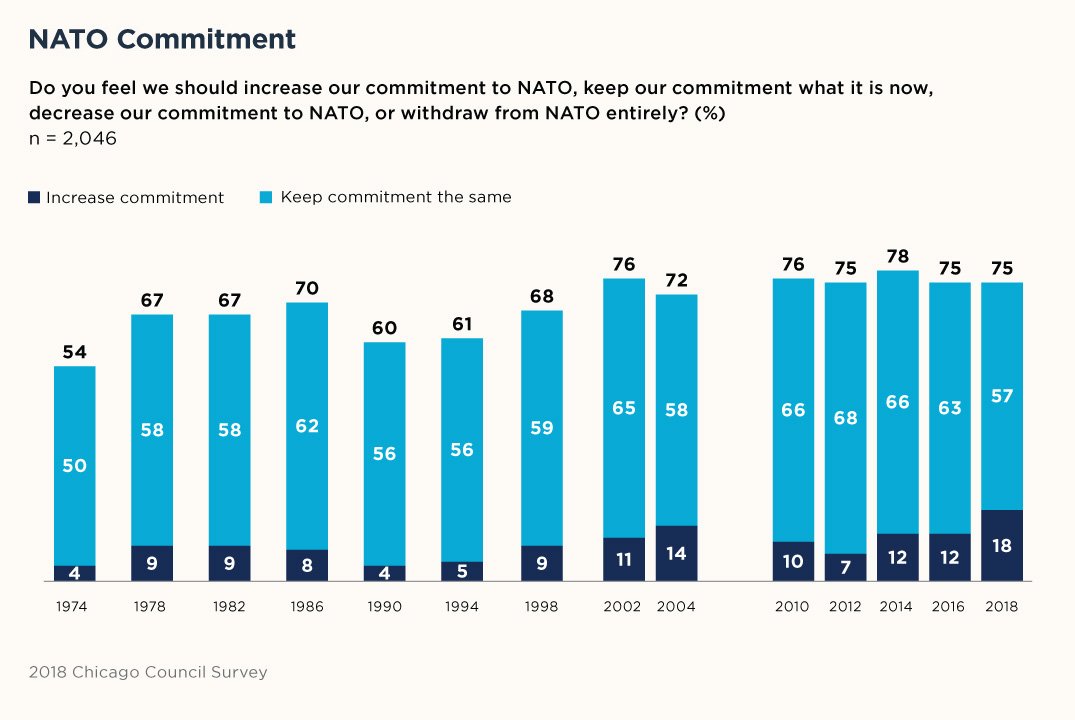 Or whether Americans benefit from trade, where the numbers also hit all-time highs: 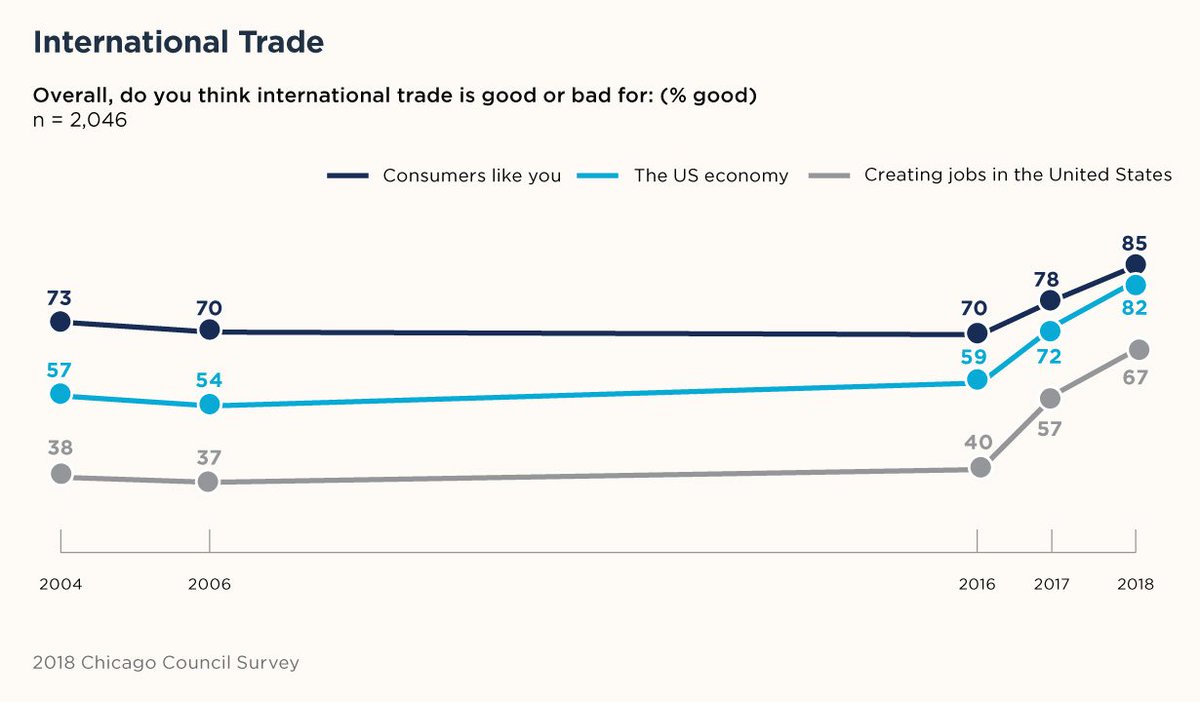 Or whether President Trump made the right call in leaving the Paris climate agreement or the Iran nuclear deal, where two in three Americans say no:

Or whether it is wiser for the United States to intimidate other countries or entice them, where Americans prefer to be admired rather than feared by a large margin:

The perhaps most interesting aspect of the survey is one the Chicago Council doesn’t tout in its report: support for liberal internationalism is up across the political spectrum. When the survey is broken down by partisan self-identification, it turns out that Democrats, Independents, and Republicans all have, to varying degrees, moved away from the positions that President Trump has staked out. (One of the benefits of sitting on the survey’s advisory committee is I get to see the raw survey results.) In all, despite the benefit of holding the presidential bully pulpit, President Trump is losing, not winning, the public debate over America’s role in the world.

These findings don’t mean that President Trump will suddenly reverse course on foreign policy. As Ivo Daalder and I argue in our forthcoming book, The Empty Throne: America’s Abdication of Global Leadership, he is deeply wedded to his America First views. Like all presidents, he has considerable discretion to act as he sees fit abroad, regardless of what Congress or the public prefers. His unilateral steel and aluminum tariffs are evidence of that.

And poll results like the Chicago Council’s will not automatically change the conversation on Capitol Hill. Members of Congress pay more attention to voters with intense preferences than to the average constituent. So while voters hostile to trade are a (shrinking) numerical minority, they command attention because they likely are to punish lawmakers who don’t share their views. Just as important, politicians, much like generals, tend to fight the last war. And the conventional wisdom in Washington, DC, is that 2016 showed that Americans have turned inward, resentful of ungrateful allies and unwilling to shoulder the burdens of global leadership.

What the Chicago Council’s survey results do show is that a large majority of Americans continue to understand the importance of U.S. leadership in the world. They want to work with others and understand that the United States has to give in order to get. We’ll see whether any of the contenders for the presidency in 2020 try to mobilize this silent majority in favor of liberal internationalism.