Sovereign funds -- and those managing money for sovereign funds -- argue that sovereign wealth funds are intrinsically a stabilizing force in the market. They have a long-term perspective. They aren’t leveraged (actually, that part isn’t totally true - some smaller sovereign are leveraged and the big funds invest in fund managers who use leverage). They are willing to buy when others want to sell, and sell when others want to buy.

Of course, it is hard to actually know if sovereign funds act consistently to stabilize markets since the biggest existing funds are also the least transparent funds - and the new funds don’t exactly have a track record. But it is hard to deny that they currently have the capacity to support markets in the US and Europe. China and the oil exporters have a lot of funds - they added over a trillion dollars to their foreign assets, I would guess, in 2007, though far more was managed by central banks than sovereign funds.

Nonetheless, few market participants are always stabilizing or always destabilizing. Most have a rather more ambiguous impact on the market. Hedge funds can pile on to a trend. Or they can bet that historic norms will reassert themselves. They can bet against a government’s efforts to defend the unsustainable. Or they can bet that large imbalances will remain for some time, and thus sell insurance against any change. They can bring new money to the market, or they can be forced to unwind leveraged positions quickly.

Sovereign funds will get into trouble. That is when they risk adding to market volatility.

The China Investment Corporation is a particular risk -- and not just because it is new.  The CIC has been given next to impossible set of tasks. It is supposed to take the risks required for China to offset the losses associated with the dollar’s depreciation against the RMB. But it also is not supposed to lose money either. And it is supposed to do all that while also supporting Chinese state firms. And unlike the oil funds, the CIC is playing with borrowed money - not the fiscal surplus generated from high oil prices.

We don’t yet really know how the CIC will act under duress. It hasn’t even deployed most of its initial allocation. However, we do have a bit of information about the activities of another set of Chinese state investors: the state banks.

The available evidence, and I want to stress that it is incomplete, suggests that they have acted like wounded giants, taking money off the table in times of trouble. Chinese state banks seem to have stopped buying foreign debt in the second half of 2007. That isn’t stabilizing.

The Chinese state banks were big buyers of foreign debt from the end of 2005 to early 2007. Their portfolio of foreign debt securities ("portfolio investment" or the red line in the chart below) went from $100b to $200b in a little over a year. 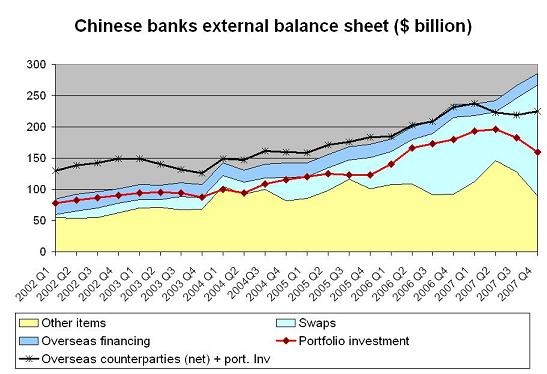 But after q2 2007 the state banks stopped buying foreign debt securities and, judging by the PBoC’s data, started selling. Note the downward move in total "portfolio investment" over the last two quarters.

We really don’t know. But it seems likely that the state banks took more risks than SAFE in 2006. They probably bought a mix of higher yielding instruments - whether corporate bonds or "private" mortgage-backed securities, including MBS that had embedded subprime exposure. And it sure seems like they stopped buying in the second half of 2007.

Now this could reflect a surge in domestic demand for dollar loans. Domestic dollar loans have increased as time when dollar deposits have fallen, meaning that the banks fund such lending increasingly with foreign exchange borrowed from the government. Or it could reflect a desire to take less risk. In some sense it doesn’t matter - China’s state banks seem (based on the limited available data) to have scaled back their demand for risky debt at precisely the same point in time as everyone else.

The Chinese state banks have not done anything wrong. They have no obligation to buy just because others don’t want to. Like a lot of other players in the market, they were probably taking more risks than made sense back in 2006.

But the recent fall in their recorded holdings of foreign portfolio securities does suggest that they have added to the market’s current trouble rather than reduced it.

They haven’t been a stabilizing force that buys when others want to sell. Rather they bought when everyone else was buying, and seem to be selling when everyone else is selling. The market for a range of risky debt could have benefited from a stronger sovereign bid; it would certainly have added "liquidity" to the market.

One characteristic of sovereign money - setting the funds from the Gulf sheikdom’s aside, as the Gulf funds often seem to have been managed more like family funds of than public money - is a strong aversion to taking losses. They political costs of losing the people’s money on a foreign adventure are quite high.

That suggests, at least to me, that sovereign money will sometimes by a stabilizing force in the market, and sometimes will not be a stabilizing force. There will be times when they bring new money into the market. And there will be times when they are desperate to get out of an investment before they have to report holding an investment that goes bad.

At least we know who will finance the US fiscal stimulus &#8230;