The November TIC data is a little hard hard to read. No story line jumps out of the data. Net flows were quite strong, making up for some bad months in q3. Deficits have to be financed or they have to disappear. But the "quality" of a lot of those flows wasn’t great -- $36.5b of the total inflow came from short-term claims (with lots of private demand for super-safe t-bills ... ).

Americans also sold $20.6 of foreign assets by Americans. That could be a positive sign - the recent rise in US demand for foreign securities has increased the total inflow the US needs to sustain a large deficit.

Foreign investors bought $70.4b of US long-term debt and equity - mostly Treasuries and Agencies. That total falls to $59.1b once adjustments are made for amortization payments on asset-backed securities and stock swaps. Most demand for long-term securities - $58.6b -- came from private investors abroad, who apparently developed a bi to an appetite for Treasuries and agencies (they bought $43.8b of them; with investors in the UK snapping up even more, $48.7b).

That flow is a bit suspicious - I would bet it mostly reflects indirect central bank demand. Consider this chart - which shows the UK and China’s treasury holdings over time. 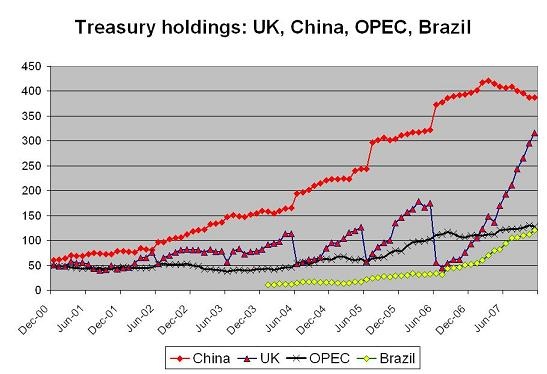 Official investors ’officially" bought $11.8b of long-term debt, mostly Agencies and corporate bonds (and most of the official demand for corporate bonds likely coming from China).  They added $33.2b to their short-term portfolio, including $17.3b in short-term securities other than Treasuries - a category that includes short-term Agencies.

Indeed, if all demand for short-term securities other than Treasuries is combined with demand for Agencies, foreign investors bought $47.5b of Agencies in November.

The US has effectively "nationalized" the market for US mortgage finance, as Fanny and Freddy have become the only real source of demand for US mortgages (hence the sharp rise in their market share). That point could be extended more broadly - Fanny and Freddy have effectively become the conduits for repackaging US mortgages into a form palatable to foreign investors, and specifically to foreign central banks. The GSEs are selling an awful lot of their debt to foreign central banks.

Russia in particular. The Russians love the Agency market for some reason. They bought $2.16b of long-term agencies, and another $8.545b in short-term Agencies, for a total of $10.7b. Not bad. All in all Russia increased in US holdings by $7.6b (it reduced its deposits as it bought agencies).

Brazil was a big buyer of Treasuries - buying $8.06b of long-term Treasuries. Brazil’s short-term Treasury holdings fell by $0.26b, but its overall holdings still increased by $7.8b. All in all, Brazil bought $9.66b of US debt.

What of the other BRICs. Well, India doesn’t appear in the US data. At all. Sort of interesting. They clearly have the lowest dollar reserve share of all the BRICs. They also have a lot of funds on deposit at the BIS.

And then there is China. China bought $6.24b of long-term US assets, apparently selling $5.2b of US treasuries while buying $6.6b of agencies and $3.7b of US debt. China’s short-term holdings fell by $11.1b (China also moved funds out of bank accounts and into various short-term US securities), for a net fall in China’s claims on the US of $4.8b.

Yeah, right. China’s reserves are still growing. China isn’t a net seller of US assets. Its purchases - especially its purchases of Treasuries, but no doubt its other purchases - are just showing up elsewhere. Hong Kong bought $8.85b of long-term securities, and increased its short-term claims by $4.3b - a $13.16b total. Hong Kong bought a lot of equities. Maybe SAFE investments isn’t just buying Australian stocks.

China also buys a lot through London. Remember the earlier chart, and the $48.7b of Treasuries and Agencies that the UK bought.  A lot of them were then sold to the PBoC. A smaller share of China’s rapidly growing portfolio is being invested in Treasuries, but China’s total Treasury holdings are still rising -- even if the increase won’t show up in the data until the Survey data is released.

Bottom line - if you assume most Treasury and Agency purchases through London ended up in Central bank hands, the official sector provided a lot of financing to the US - something like $85-90b. That would be a flow consistent with the very strong increase in global reserves in November. Combine that with net sales of foreign assets by Americans, and the US generated the inflows it needed to sustain its large deficit.

Data all comes from various points on the TIC web page.

So, how are the United States&#8217; creditors managing their own economies?