No doubt the Gulf is booming. How could it not, with oil above $90.

That boom has triggered a very sharp rise in inflation across the region. 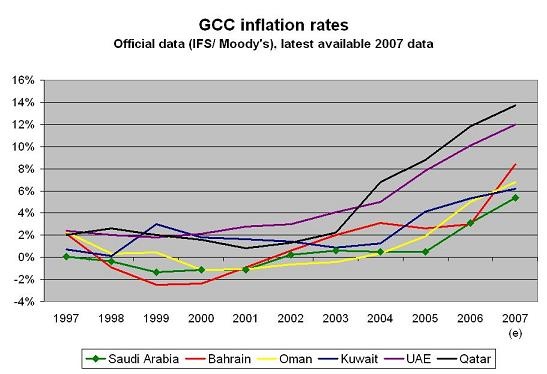 The UAE number for 2007 is an estimate that appeared in the press; the other numbers are the latest available data. And there is a fairly broad consensus that the official data understates actual inflation. Some informal estimates would put inflation in the UAE at over 20%.

Commentators who didn’t like Alan Greenspan’s decision to hold nominal US rates below the rate of inflation in the aftermath of the bursting of the .com bubble have even more to worry about in the Gulf. 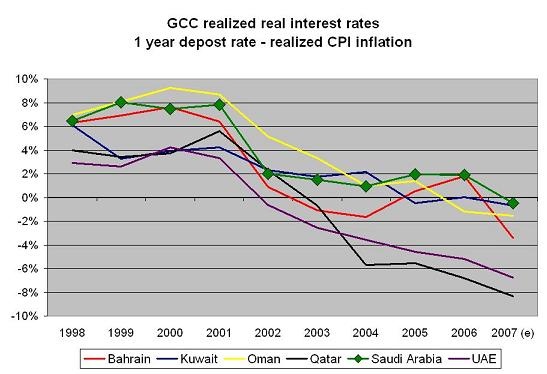 Both charts are updated versions of charts that originally appeared in my Peterson institute policy brief.

And with US policy rates set to fall further and Gulf inflation set to rise further, real interest rates will only turn more negative. That cannot be good in the long-term.

Now it is a bit unfair to blame bad policy in the Gulf for the rise in inflation and negative real interest rates that now mark the region. After all, at least some of their problems stem from the dollar’s weakness.

But then again, no one forced the Gulf to peg to the (still depreciating, and now against the yen and yuan as well) dollar. That was their choice.

I agree with the head of Saudi Arabia’s National Commercial Bank: Saudi Arabia needs to let its currency appreciate in nominal terms.

Another FT article highlighted growing popular discontent at Saudi Arabia’s dollar peg. Its title - Saudis search for inflation scapegoat -- explains why the US might want to consider signaling that it would have no objections to an adjustment in the GCC’s currency regime. A perception that the Gulf monarchies are clinging to the dollar peg as a favor to the US even though that peg no longer serves their domestic interests wouldn’t exactly improve an already strained relationship.