I have been skeptical that 2016 will be a foreign-policy election. But Donald Trump seems determined to prove me wrong. In a major speech on Wednesday, he launched a frontal assault on the fundamental premises of U.S. foreign policy. His critique may be harder for Hillary Clinton to rebut than you might think given the outpouring of criticism of his remarks.

(Yes, I am getting ahead of myself. Trump is not yet the Republican nominee and Clinton is not yet the Democratic nominee. But I’ll go out on a very short limb—both have more than 75 percent of the delegates needed to be nominated—and assume they will be squaring off against each other in the fall.)

Trump’s complaint is simple and direct: for twenty-five years, U.S. foreign policy has been poorly conceived and executed:

Unfortunately, after the Cold War our foreign policy veered badly off course. We failed to develop a new vision for a new time. In fact, as time went on, our foreign policy began to make less and less sense. Logic was replaced with foolishness and arrogance, which led to one foreign policy disaster after another.

Our foreign policy is a complete and total disaster. No vision. No purpose. No direction. No strategy.

The result is that the United States is overextended, our adversaries don’t respect us, and our allies happily let us pay for their defense.

Trump’s remedy for this alleged short-sightedness and incompetence by Democratic and Republican foreign policy experts is to put “America First.” He vows to “always put the interests of the American people and American security above all else. It has to be first. Has to be.”

It’s easy to find fault with both Trump’s indictment of current policy and his vision of what should succeed it. Russell Berman, Nicholas Burns, Daniel Drezner, Julia Ioffe, Lindsay Graham, Aaron David Miller, Jennifer Rubin, Mark Thompson, Fareed Zakaria, and the New York Times editorial board are just some of the writers who have done just that. (To be even-handed, Senate Foreign Relations Committee Chairman Bob Corker and Ann Coulter both praised the speech, while the Wall Street Journal editorial board gave it a mixed review.)

But the criticisms of Trump’s claims can all be true without denting the political appeal of what he is saying. Most Americans don’t know that America First was the name of the movement that opposed the U.S. entry into World War II, that bringing American troops home from overseas bases will cost more than it saves, or that the unpredictability Trump advocates will upend the stability he promises to deliver.

What Americans do know is that much of what Trump says describes what they are seeing and hearing. Recent U.S. military interventions have cost us dearly in blood and treasure without producing the promised results. Other countries do cheat on trade deals. America’s friends and allies do free ride. How do they know this? In good part because foreign policy experts and politicians, including President Obama, have told them this time and again.

And there’s the rub. Most foreign policy criticisms, whether coming from Democrats or Republicans, target specific policies without questioning core principles: the United States benefits from its global leadership, alliances serve America’s interests, and free trade promotes prosperity to name just a few. So when Obama, Clinton, or former Secretary of Defense Robert Gates criticize free riding by NATO allies, they aren’t looking to create space so the United States can go it alone. They instead hope to reinvigorate the alliance.

But Trump’s not interested in a remodel. He’s bent on a full tear down. He’s leveraging  longstanding criticisms of specific policies to upend the core assumptions that the foreign policy establishment accepts—and he is not going to let sentimentality about the traditional way of doing things get in his way.

So if Clinton wants to brunt Trump’s push to drive the United States toward a more mercantilist, unilateralist, and nationalist foreign policy she will probably need to do more than call his ideas "dangerous" and point out his factual mistakes, inconsistencies, and exaggerations. She will also have to do something that she, and most foreign policy experts, aren’t accustomed to doing: make an affirmative case to ordinary Americans that global leadership, a network of alliances, and the liberal international order serve their interests. It can be done. But it won’t necessarily be easy.

Ted Cruz named former Hewlett-Packard CEO and one-time rival for the Republican nomination Carly Fiorina as his running mate. Donald Trump was not impressed. Bernie Sanders declared that he was “in it to win it,” despite winning only one of Tuesday’s five primary contests.

A Gallup poll released on Thursday found that Americans who have an opinion are split over whether the United States should withdraw from free trade agreements; the perhaps more interesting finding is that 43 percent of Americans say they don’t know enough to have an opinion. A Reuters poll released on Tuesday found that Americans view the economy as the most important problem facing the United States today, followed closely by terrorism. The Lowy Institute released a poll that found 45 percent of Australians think Australia should “distance itself from the United States if it elects a president like Donald Trump."

Hillary Clinton was the only candidate out with a new ad this week. “Love and Kindness” portrays Clinton as an inclusive candidate for all Americans.

The next event on the nomination calendar is the Indiana primary on May 3. There are 57 Republican and 92 Democratic delegates at stake. The GOP contest is winner-take-most, and this probably the last opportunity for Cruz and Kasich will have to stop Trump from winning the 1,237 delegates he needs to clinch the nomination. 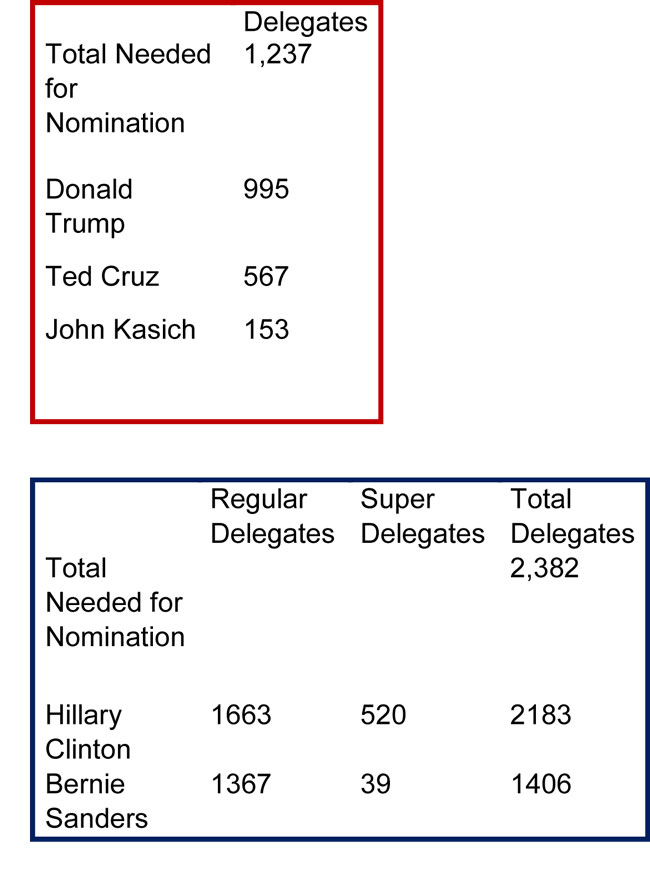 Election Day is 193 days away.